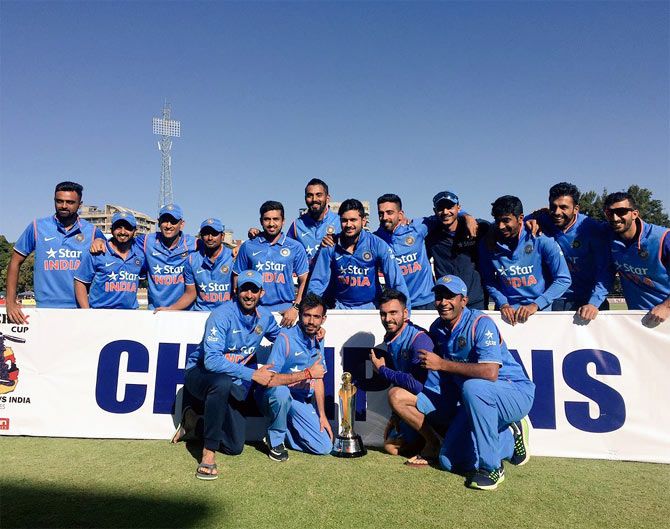 India yet again proved too strong for a below-par Zimbabwe, trouncing them by 10 wickets in the third and final match to sweep the ODI series 3-0, in Harare, on Wednesday.

In what turned out to be one of the most one-sided matches in recent times, Mahendra Singh Dhoni's young side outclassed the hosts in all departments, first bowling them out for 123, their lowest total in the series, and then romping home in 21.5 overs.

If pacer Jasprit Bumrah led the demolition after Zimbabwe elected to bat by taking four wickets for 22 runs, openers KL Rahul (63 not out) and debutant Faiz Fazal (55 not out) completed the formalities easily. 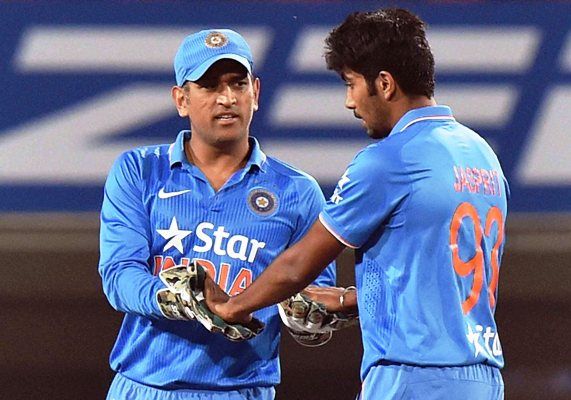 In the process, India also completed a hat-trick of whitewashes against Zimbabwe, having won earlier ODI series by 5-0 and 3-0 margins in 2013 and 2015, when Virat Kohli and Ajinkya Rahane respectively led the team.

Dhoni conquered two milestones in the series. With 107 wins as captain, he equalled Allan Border’s record for the second highest number of wins in ODI history, behind Ricky Ponting (165).

He also became the first Indian wicketkeeper-batsman to complete 350 dismissals in 50 overs’ cricket.

However, there wasn't much more to draw from the three matches as it was one rare series where only four batsmen -- namely openers Rahul, Karun Nair, Fazal (third ODI) and Ambati Rayudu -- got a decent hit in the middle.

The entire middle-order – the skipper himself, Kedar Jadhav, and Manish Pandey (two balls) -- did not get a chance to bat thanks to the impressive showing by the bowlers, led by Jasprit Bumrah who finished with 9 wickets from 3 games.

The nature of the contest was of very poor quality as there was only one team which had its foot on the pedal. 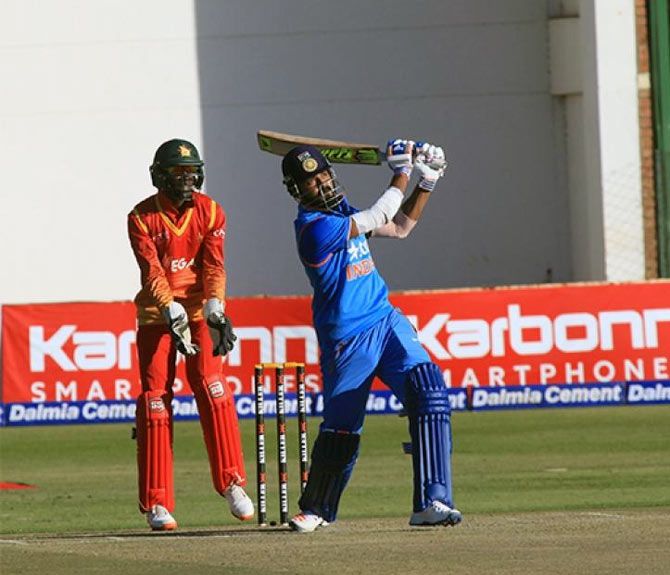 While chasing, Rahul made merry against the pedestrian bowling attack, helping himself to a half-century, his second 50-plus score after the hundred on debut while old domestic warhorse Faiz Fazal celebrated his maiden India cap with a polished knock.

With only 124 to get, the Indian openers did not need to take any risks yet scored runs at a quick clip to finish things with minimum fuss.

Left-handed Fazal looked elegant as he hit a few gorgeous shots through the covers as well as back past the bowler. He lifted skipper and leg-spinner Graeme Cremer for a straight six.

While Fazal's innings was studded with seven fours and a six off 61 balls, Rahul was more partial towards the cut shot and he also hit some cover drives.

When Cremer tried to flight the ball, the Mangalore lad was quick to pounce on it and hit him into the sightscreen for a six.

He hit another six off Chamu Chibhabha over long-on. In all, he hit four boundaries and two sixes off 70 balls.

The century stand came off 113 balls while Fazal finished the match with a pulled boundary.

Rahul, who finished with 196 runs from three innings that had a century and a half-century, was named man of the series.

Earlier, Zimbabwe suffered the embarrassment of losing five wickets in a space of 11 deliveries, with an addition of four runs, as their batting turned out to be an action replay of the two earlier lopsided contests. 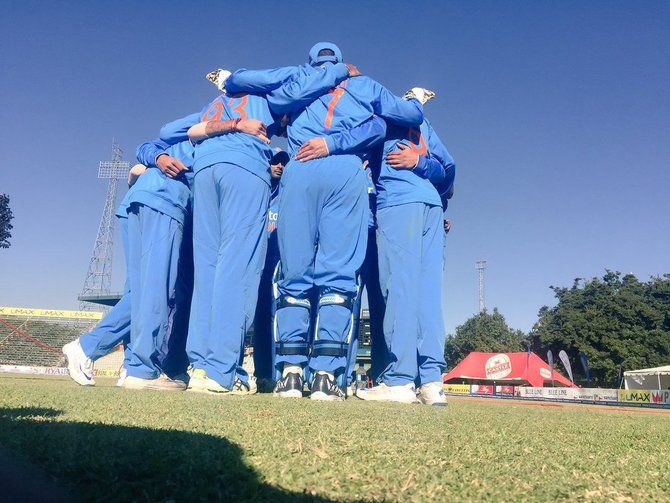 From 104 for 3 in 32.4 overs, Zimbabwe slumped to 108 for 8 in 34.3 overs as none of the home players showed any resilience against a disciplined Indian bowling attack. They lost eight wickets for 34 runs after being in a relatively good position at 89 for 2 in the 29th over.

Bumrah was fast and got vicious inward movement, while spinners Yuzvendra Chahal (2-25 in 8 overs) and Axar Patel (1-16 in 10) also maintained their consistent run in the series.

Skipper Mahendra Singh Dhoni also reached a 'mini milestone' in his ODI career when he took his 350th victim (catch and stumping) -- a smart catch off Bumrah to dismiss Elton Chigumbura (0). 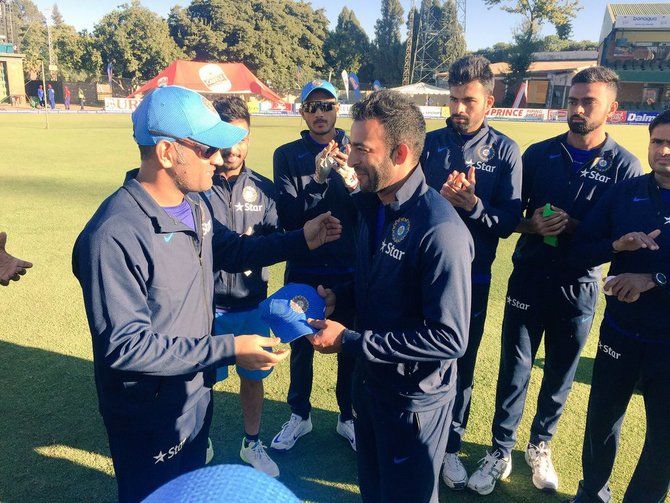 He is now placed fourth in the overall list behind Kumar Sangakkara (482 victims), Adam Gilchrist (472) and Mark Boucher (424 victims).

Zimbabwe's performance in the series has been so appalling that their sequence of scores have gone from bad to worse:  168, 126 and now 123.

They made a tentative start against the new-ball pair of Dhawal Kulkarni and Barinder Sran, both of whom got appreciable movement off the pitch.

The seasoned Hamilton Masakadza (8) saw Kulkarni bowling to the channel outside off-stump as the Mumbai seamer got the ball to move away from the right-hander after pitching.

After playing and missing a few, Masakadza tried an audacious drive without getting to the pitch of the delivery and KL Rahul took a regulation catch.

Chamu Chibhabha (27) and Vusimuzi Sibanda (38) negotiated the new ball safely but could not force the pace of the innings. 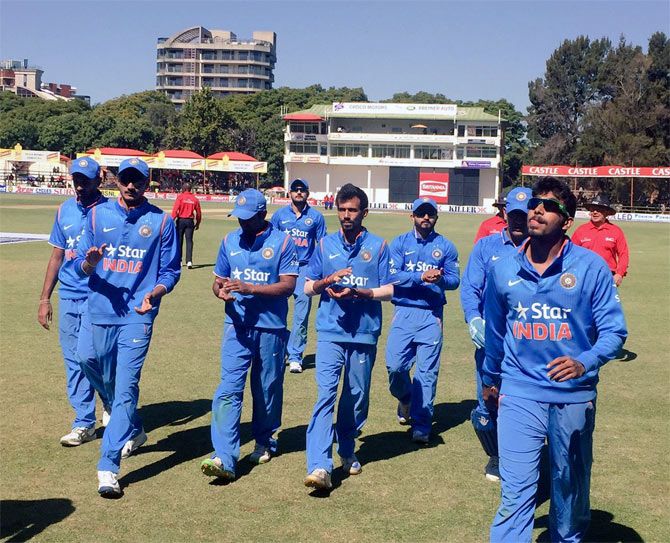 It was Chahal, not afraid to flight his deliveries, who dealt a double blow.

A tossed up delivery saw Chibhabha take the aerial route only to be caught at the long-off boundary by Bumrah.

Chahal also got top-scorer Sibanda, who had faced 71 deliveries, by tossing one up. The batsman was beaten in the flight and the bowler got a return catch.

Post Sibanda's dismissal, it was the same script of losing wickets in a heap. 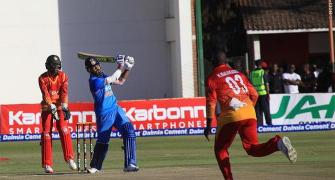 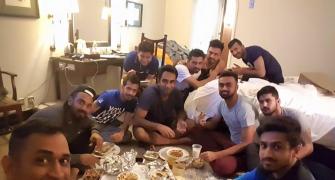 Dhoni's 'down to earth' team dinner with his young guns Our bowlers did a great job to restrict them: Dhoni 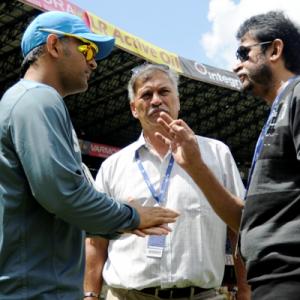 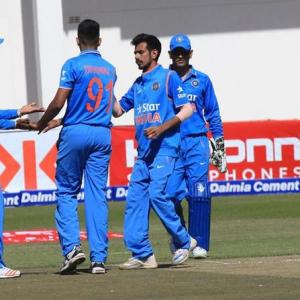