That Australia have lost the second Test in Hyderabad is given.

In fact, the visitors can give themselves a pat on the back if they manage to extend the match into the fifth day.

If the manner in which their batsmen tackled the Indian spinners on Monday, Day 3, on a deteriorating wicket at the Rajiv Gandhi International stadium, is evidence, it would need a Herculean effort to stave off an innings defeat.

Ed Cowan was unbeaten on 26, and giving him company was Shane Watson, on nine.

R Ashwin was the pick of the Indian bowlers with figures of two for 42, taking his tally of wickets for the series to 15. 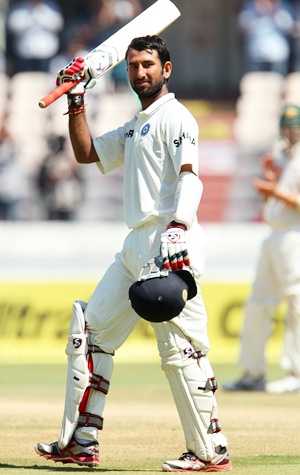 Earlier, India, despite having had a sizeable lead preferred not to declare, batting for two sessions to pile up 503 in their first innings.

Cheteshwar Pujara top-scored with 204 and Murali Vijay made a valuable 167, the two putting on a record 370 runs for the second wicket, in what is the fourth-highest partnership for India ever.

Only four runs came off the day’s first four overs. A single off the first ball of the fifth, by Pujara off Doherty, helped raise the 300-run partnership for the second wicket.

The first bowling change was affected in the 12th over of the day, Peter Siddle replacing James Pattinson, and six runs from that over helped stretch the home team’s lead to over 100 runs.

Another four runs off Siddle, in the latter’s second over of the day, helped Vijay reach the 150-run mark, the 28-year-old (overnight on 129) requiring 44 balls to score the 21 runs needed to reach the milestone.

When Pujara took a single off Siddle, in what was the 18th over of the day (111th of the innings), it ensured a record new partnership for India for the second wicket, at 345 runs. The previous Indian record for the highest second-wicket partnership was held by Sunil Gavaskar and Dilip Vengsarkar, who put on 344 against the West Indies in 1978.

Vijay's 361-ball innings was inclusive of 23 boundaries and two sixes; he helped Pujara put on 370 runs for the second wicket, in what was the fourth-highest partnership for India ever.

A boundary to midwicket, in Maxwell’s next over, helped Pujara complete a well-deserved double hundred.

It was the second double hundred of his fledgling career, having scored an unbeaten 206 against England in his opening Test at Motera last November.

He fell soon after, Pattinson having him caught by Doherty at long leg. The 25-year-old’s 204 came off 341 balls and was inclusive of 30 boundaries and a six.

Virat Kohli began with a boundary, driving Maxwell past cover, the shot helping the home team reach the 400-run mark.

It took Australia less than two overs to make a breakthrough on resumption after lunch. It was a vital wicket at that, Pattinson having Sachin Tendulkar (7) caught behind.

It was a delivery down the leg side that the batsman failed to connect well. The third umpire was referred to, and even though the replays were inconclusive, Marais Erasmus ruled Tendulkar out.

The batsman failed to capitalise on a good opportunity and disappointed the many fans who had come just to see him bat, despite the fact that it was a Monday.

Pattinson’s sixth spell figures of 6-3-10-2 made for an impressive read.

MS Dhoni walked out to bat and made his intentions clear immediately, hitting three successive boundaries off Doherty.

India’s captain continued with his aggression, scoring at more than a run a ball, his boundaries in a Siddle over helping his team extend its lead past the 200-run mark.

Another couple of boundaries in succession by Dhoni, on this occasion off Maxwell, not only helped the team get past the 450-run mark but also helped raise the 50-run partnership for the fifth wicket, the captain contributing 43 of those.

However, Dhoni’s flamboyance eventually led to his dismissal, Doherty catching him on the rebound at mid-off, and Maxwell getting his second wicket as a result.

Dhoni’s 43-ball 44 was inclusive of eight hits to the fence; he and Kohli added 56 runs for the fifth wicket.

Ravindra Jadeja (10) hit Maxwell for a boundary before smashing one again over long-off for maximum. However, the bowler had the last laugh, taking a return catch on a second attempt.

R Ashwin (1) was dropped by Ed Cowan at forward short leg off the first ball he faced. However, the offie survived just four more deliveries before ensuring an otherwise profligate Doherty his first wicket, Phillip Hughes taking the catch at gully.

Harbhajan Singh didn’t bother the scorers, hitting straight to Maxwell at mid-off to give Doherty his second wicket.

Doherty then had Bhuvneshwar Kumar (10) stumped to take his third wicket and end the Australian ordeal.

However, in the context of the match it was Australia’s best session.

Warner ensured the Australian second innings a positive start with three boundaries in Ashwin’s first over.

Kumar began the innings with three straight maiden overs but was unlucky twice over.

In his third over, Warner (on 13) was put down by Kohli at gully, and in his fourth, Dhoni couldn’t hang on to the edge offered by Cowan (yet to open).

It took Cowan 29 balls to open his account, and he did so with a cheeky single off Ashwin.

Warner came out of the crease and smashed the same bowler for a maximum over long-off to help raise the Australian fifty.

However, it was Ashwin who had the last laugh, cleaning up Warner (26) in his 10th over.

Warner’s 56-ball knock included three fours and a six; he and Cowan added 56 runs for the opening wicket.

The visitors lost their second wicket at the same score, Phillip Hughes (0) ending his nine-ball misery by dragging an Ashwin delivery on to his stumps.

Cowan and Watson lived to fight another day. 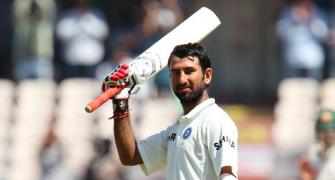 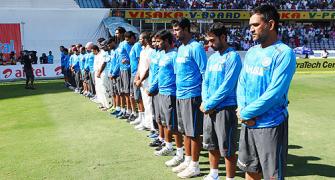 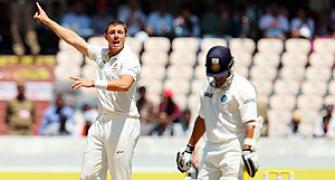 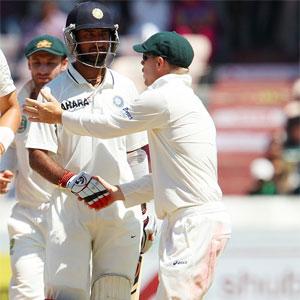 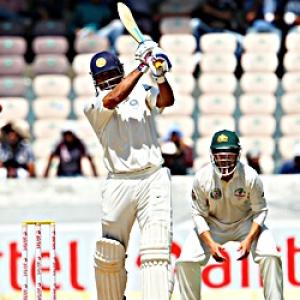 India lose wickets in a heap but swell lead