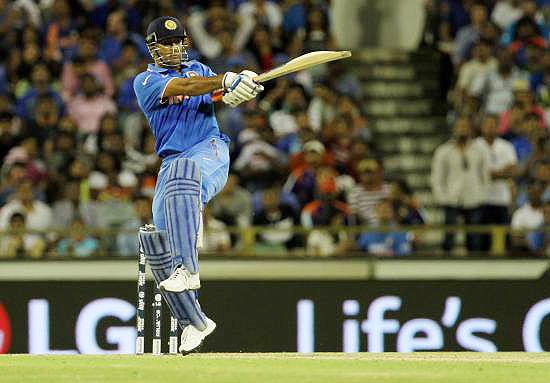 Mahendra Singh Dhoni scored an unbeaten 45 as India staved off a fightback from the West Indies to win the Group B World Cup match by four wickets at the WACA in Perth on Friday.

The victory saw the defending champions maintain their unbeaten run in the tournament, extend their stay at the top of the group and seal a place in the quarter-finals. However, their showing wasn't as commanding as the previous three victories as the batting was scrappy, fielding shoddy, with as many as four catches being dropped, and the bowling lacking discipline at times with 16 wides during the West Indies innings.

The West Indies suffered their third reverse in five matches, but still occupy fourth place in the group, ahead of Ireland, Zimbabwe and the United Arab Emirates.

Chasing a meagre total, India's top-order struggled due to poor shot selection before Dhoni's composed knock helped them attain the target in 39.1 overs and ensure their fourth consecutive win in the tournament.

Earlier, pacer Mohammed Shami returned from injury to torment the West Indies batsmen and claim three wickets as India dismissed the Caribbean side for 182.

West Indies captain Jason Holder (57) hit his second half-century and highest in One-day internationals to give his team some sort of a total to defend against the holders, who have won all three of their matches so far. 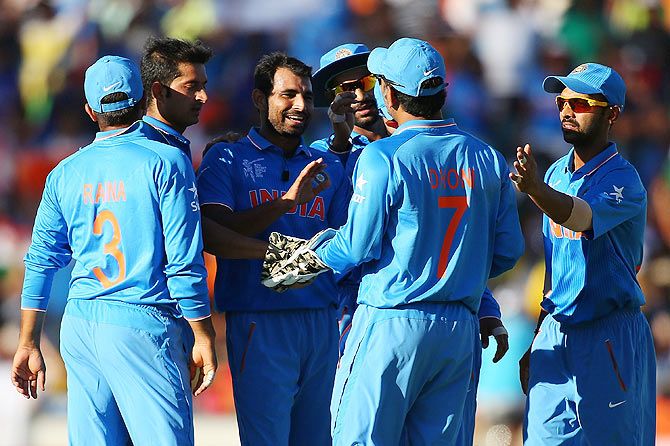 Mohammed Shami of India celebrates with teammates after dismissing Darren Sammy of the West Indies during their 2015 ICC Cricket World Cup match at the WACA in Perth on Friday. Photograph: Paul Kane/Getty Images

Shami, who missed India's win against the United Arab Emirates with a knee injury on Saturday, put West Indies on the backfoot early by dismissing hard-hitting openers Dwayne Smith (six) and Chris Gayle (21) with the new ball.

Gayle, who hit the World Cup's highest individual score of 215 against Zimbabwe last week, offered up two difficult chances before he pulled Shami straight to Mohit Sharma. He was also guilty of running out Marlon Samuels (2).

With their talisman gone, West Indies were reduced to 35-4 and then 85-7 on the first ball of the 25th over before some resolute batting from the tail saw them through to the 45th over.

Right-arm paceman Shami came back with an older ball to take out former captain Darren Sammy (26) to end a promising 39-run stand for the eighth wicket before Holder added 51 for the ninth with Jerome Taylor (11).

Holder hit four boundaries and three sixes before becoming the last man to fall for West Indies off the bowling of Ravindra Jadeja.

It was one of two wickets for the left-arm spinner to complete another stronger bowling display by the twice champions, who were also guilty of dropping a number of catches.

India stutter in the chase

India’s reply was expected to be easy but they were off to a disastrous start, both openers gone cheaply and the middle order not really comfortable at the crease.

Shikhar Dhawan (9) chased a Jerome Taylor delivery outside the off-stump which was not of drivable length and was caught by Darren Sammy at second slip.

Rohit Sharma (7) got fuller delivery from Taylor and the outside edge was taken by wicketkeeper Denesh Ramdin.

Virat Kohli (33, 5x4) played some crisp on-drives as well as a lovely cover drive and added 43 runs for the third wicket with Ajinkya Rahane (14).

Till the time Kohli was at the crease, he looked compact most of the times although there were a few good deliveries from both Taylor and Kemar Roach which had him in some sort of bother.

But it was a well disguised short ball from Andre Russell that brought about his end, going for an ugly-looking pull-shot. He was off balance and also eyes were not on the ball as it went straight to the fielder at deep fine leg.

Kohli's departure at the end of 15th over created more pressure on Rahane, who was completely out of sorts as he even failed to cash in on free-hits.

He was finally out fishing a Roach delivery to Ramdin behind the stumps. He asked for a 'review’, but umpire Nigel Llong’s decision was upheld and his miserable stay of 34 balls ended.

Suresh Raina (22) and skipper Dhoni – the two most capped ODI players in this team got together and looked like getting things back on track before the former flashed at a rising delivery from Dwayne Smith to give Ramdin his third catch of the day.

Ravindra Jadeja's discomfort against fast and rising deliveries is well known and it wasn’t any better on the day as he also fell prey to the pull-shot, being caught in the deep.

Dhoni played a patient knock and was ready to wait for the loose deliveries as he knew that the target was always in reach. He ran well between the wickets and got a six when he slashed hard at Russell delivery. With Ravichandran Ashwin for company, the invaluable 51 runs added for the seventh wicket sealed the match for India.