News
Business
Movies
Sports
Cricket
Get Ahead
Money Tips
Shopping
Sign in  |  Create a Rediffmail account
Rediff.com  » Cricket » 'I like to take time initially and assess the conditions' Refusing to rate his match-winning ton against Bangladesh in the quarter-final, Indian top-order batsman Rohit Sharma has said the ongoing World Cup campaign is a very prestigious stage and he wants to make the most of it.

Opener Rohit's calculated 137 off 126 deliveries helped India outplay Bangladesh by 109 runs to book their semi-final spot and the innings is certainly special for the Mumbai batsman.

"It should be right up there. A maiden World Cup hundred is always special. It came at the right time and in a crucial game for the team. But I do not place my innings and knocks in any order. I feel all hundreds you get are really special. Centuries don't happen every day and whenever you get one, you cherish it," Rohit said in an interview with bcci.tv.

"What is more satisfying is the situation in which I got that hundred and most importantly that we won the game in the end, which is what matters. I cannot describe how special this World Cup campaign is for me. It is a very important tournament and this is a precious stage for me," he added. 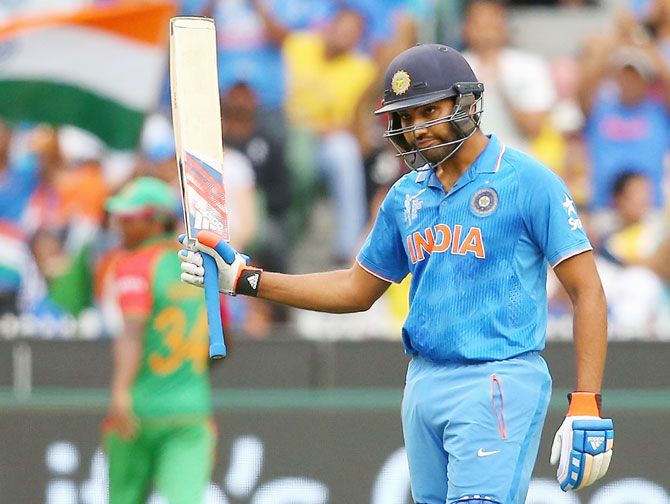 Rohit Sharma of India raises his bat after scoring a hundred during the World Cup quarter-final against Bangladesh. Photograph: Quinn Rooney/Getty Images

Crafting his innings to perfection, Rohit batted with patience till about 70 runs before the talented batsman cut loose to register his first World Cup century, his innings laced with 14 fours and 3 sixes.

"There is no mental approach to switching gears. It is about timing certain shots according to the condition of the game. My job was not over after getting to a hundred. I still had a lot of overs left and once I got my century I wasfocused on helping the team get a good score," he said.

Rohit's 122-run fourth wicket partnership with Suresh Raina (65 of 57 deliveries) was crucial for India managing 302 for six after electing to bat first. The Man of the match acknowledged the importance of Raina's half-century to the outcome of the game. Indian players celebrate the fall of a of Bangladesh wicket during the World Cup quarter-final at Melbourne Cricket Ground. Photograph: Quinn Rooney/Getty Images

I think more than my half century at that stage, it was Suresh Raina's fifty that changed the momentum of the game. He scored at run-a-ball and changed the course of the game playing those shots. It completely put Bangladesh in a different position. They had an upper-hand initially but then Raina just came in and turned it in our favour.

"His fifty was important in terms of laying a good platform for posting a decent score. Our partnership was crucial after losing three wickets. We, as a batting unit, have always spoken about getting one big 100-run partnership and that partnership put us in a strong position," Rohit opined.

India, who have been unbeaten so far, have registered 11 wins on the trot over two World Cups. Rohit is confident of a strong show in the final lap from the defending champions. "It will be a huge game and now there is no looking back. We can't afford any mistakes. All our three departments have done well in the last seven games.

"We have posted good scores, chased well and the bowlers have picked up 70 wickets in seven games. The fielders too have shown a lot of energy and we are doing well in unison. This shows that our team has a lot of caliber, Rohit said.