Zimbabwe scored a comprehensive five-wicket victory over Scotland in Hobart on Friday to snatch a berth in the Super 12 stage of the ICC Men's T20 World Cup for the first time after topping Group B.

They join India, Pakistan, South Africa, Bangladesh and the Netherlands in Group 2.

Electing to bat, Scotland put up 132 for 6, opener George Munsey top-scoring with 54.

Pacer Tendai Chatara led a spectacular bowling show with figures of 4-1-14-2 as Zimbabwe restricted Scotland to a below-par total.

Chatara, who also became the first bowler from Zimbabwe to take 50-plus wickets in T20 Internationals, checked the run flow with his accurate bowling.

Left-arm pacer Richard Ngarava (2/28) was a tad expensive, but he also dealt a twin blow to Scotland, who never managed to get going after captain Richie Berrington opted to bat.

Zimbabwe's chase was not without hiccups but Craig Ervine produced a captain's knock of 54 and Sikander Raza smashed a breezy 40 as they overwhelmed the target with nine balls to spare.

Raza had earlier taken one wicket for 20 with his off-spin and was adjudged man-of-the-match.

"It's satisfying and humbling and emotional as well," said Raza, who also took a stunning catch, later.

IMAGE: Ecstatic Zimbabwe fans at the stadium in Hobart on Friday. Photograph: ICC/Twitter

Zimbabwe join India, Pakistan, South Africa, Bangladesh and the Netherlands in Group 2 of the Super 12 stage.

Earlier in the day, Paul Stirling smashed a glittering half-century as Ireland eliminated twice champions West Indies from the T20 World Cup and advanced to the Super 12 phase with a nine-wicket thrashing in Hobart on Friday. 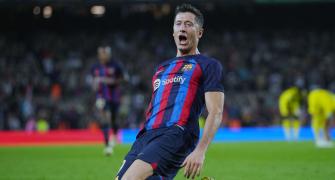 Will India Field This Team Vs Pakistan? 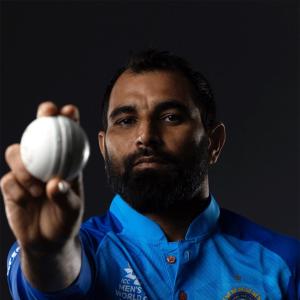 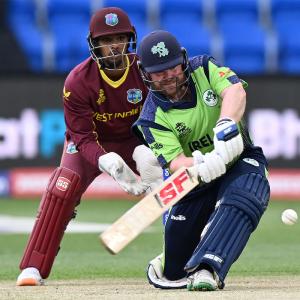 West Indies lose to Ireland; out of T20 World Cup