IMAGE: 'We should not make cricket a substitute for other actions that our government should be able to take' (Image used fro representational purposes). Photograph: ICC/Twitter

Senior Congress leader Shashi Tharoor, on Friday, reacted to calls on banning the India-Pakistan match to be played during the ICC Cricket World Cup later this year.

"We should not make cricket a substitute for other actions that our government should be able to take," opined Tharoor after tensions escalated between India and Pakistan following the Pulwama attack.

India and Pakistan are scheduled to face off in the ICC World Cup on June 16.

Tharoor’s statement came just ahead of the Supreme Court-appointed Committee of Administrators (CoA)’s a crucial decision on whether India should play Pakistan in the 2019 ICC World Cup in the wake of Pulwama terror attack.

In an exclusive interview to ANI, the Congress leader also reminded the nation that the two countries played the World Cup even at the height of the Kargil war.

"In 1999 Kargil War, India played Pakistan in the cricket World Cup and won. To forfeit the match this year would not just cost two points, it would be worse than surrender, since it would be defeat without a fight."

Several leaders from within the country have called for a boycott in order to isolate Pakistan at international platforms in various areas including sports. 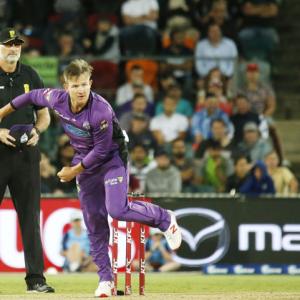 Can BBL bowling stint help Short push for a spot in Aus team?