Harbhajan waits for 45 mins before getting entry into airport

India spinner Harbhajan Singh was denied entry into the Anna International Airport in Chennai for not having a ticket and had to wait for about 45 minutes outside the entry area before finally getting in. 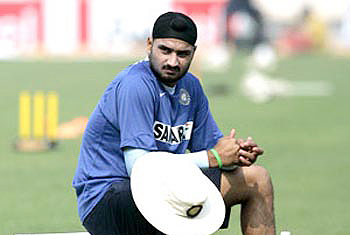 The tweaker arrived at the domestic airport from Mumbai and was taken to International airport from where the Indian  cricket team was scheduled to leave for Sri Lanka.

Most of the team members had already arrived in the city, on Thursday.

Instead of joining teammates at a city hotel, Harbhajan preferred to go straight to the International airport and wait for the team.

A hotel representative accompanied Harbhajan and took him from domestic to international airport.

The security personnel asked the spinner to show his ticket but the cricketer did not have any as the team travels on a group ticket.

The hotel representative then pleaded the spinner's case with the Airport manager but he also reasoned that they can not let anyone in without a travel ticket and suggested the spinner to buy a visitor pass and wait in the lounge.

Harbhajan though prefrerred to wait outside the entry area.

A xerox copy of the ticket was arranged quickly and only then Harbhajan could get inside the airport.

Indian team left for Sri Lanka to play a Test series and a tri-nation ODI series.