'I'd love to be England coach one day, just not quite yet.' 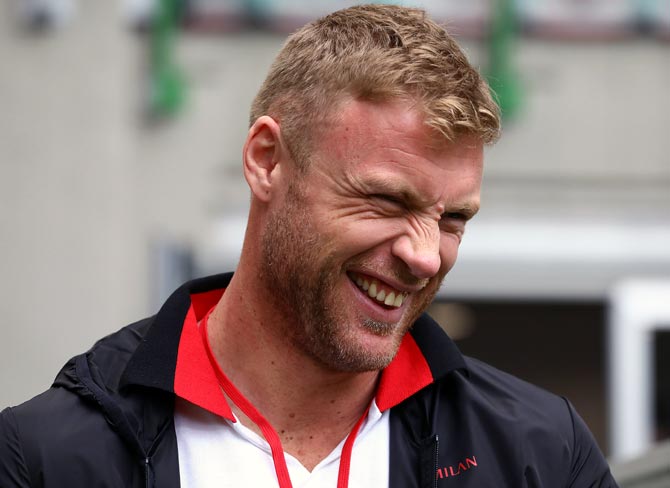 Former Ashes-winning all rounder Andrew Flintoff said he once applied for the England head coach role in 2014 but claims his email was dismissed as a joke.

"A few years ago I applied for the England coaching job -- we were getting beat, I was in the office and thought, 'I'm going to apply'", Flintoff told BBC's Test Match Special during the fourth Ashes Test at Old Trafford on Friday.

"I wrote an email for the interview, a month passed and I'd heard nothing. I chased it up, then I got a phone call saying they thought it was somebody taking the mick."

Flintoff's England career earned him cult status. The highlight came with his series-winning contributions with bat and ball during the thrilling 2005 Ashes at home to Australia.

He was captain in 2006-07 when Australia inflicted emphatic revenge with a 5-0 hammering but was also part of the 2009 Ashes winning side.

His off-field antics also made headlines, particularly at the 2007 World Cup in West Indies when he reportedly had to be rescued after falling off a pedalo following a night out -- an incident that saw him stripped of the vice-captaincy and fined.

England coach Trevor Bayliss is due to step down at the end of the current Ashes series and Flintoff, who retired from all forms of cricket in 2010 after a succession of injuries but made a brief Twenty20 comeback in 2014, said he is serious about becoming England's coach one day.

"Coaching is definitely an ambition," said the 41-year-old, who has forged a successful TV career.

"There are probably two or three coaching jobs I'd like -- England, Lancashire or Lancashire Academy.

"I'd love to be England coach one day, just not quite yet."

Flintoff, who played 79 Tests and 141 ODIs for England, said he had taken his level one and level two coaching badges alongside former England team mate Steve Harmison.

© Copyright 2020 Reuters Limited. All rights reserved. Republication or redistribution of Reuters content, including by framing or similar means, is expressly prohibited without the prior written consent of Reuters. Reuters shall not be liable for any errors or delays in the content, or for any actions taken in reliance thereon.
Related News: Andrew Flintoff, England, Lancashire Academy, BBC, Steve Harmison
SHARE THIS STORYCOMMENT
Print this article