Smith’s three double centuries against England is second only to Bradman’s record five, while his 11th Ashes ton moved him past Steve Waugh’s 10 into outright third overall. Only Bradman (19) and England’s Jack Hobbs (12) have more Ashes hundreds. IMAGE: Australia's Steve Smith raises his bat as he leaves the ground after being dismissed for 211 runs on Day 2 of the 4th Ashes Test at Old Trafford in Manchester on Thursday. Photograph: Getty Images

The Steve Smith double century at Old Trafford that continued his brilliant Ashes campaign has generated wonder Down Under, with Australia media branding him a modern-day Don Bradman on Friday.

The Depression-era Bradman’s batting average of 99.94 invites no comparison but Smith’s feats in England mark him out as the next most effective tormenter of the nation’s bowlers.

Back at the crease after missing the third Test through concussion, his 211 propelled him to 589 runs for the series at an average of 147.25, leaving England’s Headingley saviour Ben Stokes (327 at 81.75) well behind in second place.

Smith’s three double centuries against England is second only to Bradman’s record five, while his 11th Ashes ton moved him past Steve Waugh’s 10 into outright third overall.

Only Bradman (19) and England’s Jack Hobbs (12) have more Ashes hundreds.

“There was even a song written about him. ‘Our Steve Smith’ is more likely to be a trending hashtag.

“But however it’s captured, this era, this display of sheer cricketing dominance will live well beyond this time, and this team.” IMAGE: Steve Smith is well on the way to being regarded as one of the all-time greats, according to former Australia players. Photograph: Alex Davidson/Getty Images

Smith has now five centuries from his last six Tests against England and averages 65.37 in the Ashes, also second only to Bradman among Australian cricketers.

His day two exploits pushed Australia to a mammoth 497 for eight declared, with England 23 for one at the close of day two on Thursday, and under huge pressure to keep the series alive.

Bradman’s lofty record of 5,028 Ashes runs has remained the benchmark for 70 years and 30-year-old Smith (2,615) may struggle to mow it down, even if his formidable gifts and hunger remain undimmed for years.

But the former captain is well on the way to being regarded as one of the all-time greats, according to former Australia players.

“He could be anything. We might be seeing history in the making here,” former Test batsman Mike Hussey said on ESPNcricinfo.

“To think how good Bradman must have been -- to be a third again better than what Steve Smith’s doing at the moment -- is ridiculous,” Ponting told Cricket Australia’s website (cricket.com.au).

“(Smith’s) got four, five, six years of good cricket ahead of him, which if you add it up, that’s probably another 80, 90 Test matches.

“Then he’s played 150 games and could have all sorts of numbers and records by then and let’s hope he does, because the way he’s going about it now, the way he’s playing, he deserves to get the rewards from that.”

© Copyright 2021 Reuters Limited. All rights reserved. Republication or redistribution of Reuters content, including by framing or similar means, is expressly prohibited without the prior written consent of Reuters. Reuters shall not be liable for any errors or delays in the content, or for any actions taken in reliance thereon.
Related News: Don Bradman, Steve Smith, England, Australia, Steve Waugh
SHARE THIS STORYCOMMENT
Print this article 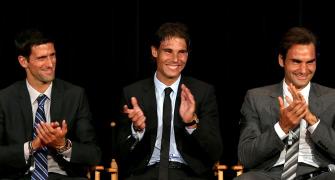 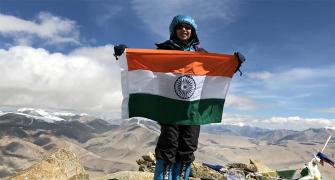