Mark Boucher, the former South Africa wicketkeeper, lost the lens, iris and pupil in the eye injury which forced him to announce his international retirement, he said Wednesday.

Boucher has already quit international cricket following the injury last month and said he was unlikely to return quickly, or even at all, to the professional game after undergoing a series of operations. 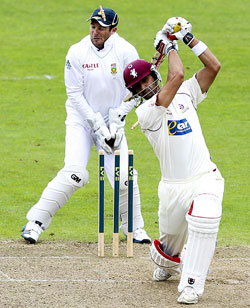 The 35-year-old, who played in 147 Tests and completed a world record 555 Test dismissals, suffered a lacerated left eye after being struck by a bail during the Proteas' warm-up match against Somerset in England last month.

"It is unlikely that I will play any professional cricket again in the near future, which is very unfortunate as I was looking forward to contributing as a player for the Cobras," he said in a statement.

"The risk of additional damage to my left eye or even damage to the other eye doesn't warrant it."

He added: "It has been a difficult time for me mentally and physically."

"I have lost the lens, iris and pupil in my left eye. There was severe damage to my retina...physically, at times, I have been in a lot of pain. "

"I accept that the healing process is a long one and that attaining some vision in my left eye will take some time and a lot of patience."

"Injuries happen and this could have happened earlier on in my career.

"I am incredibly grateful for the length of career that I have had and the amazing things I have experienced and people I have met during that time. This is just another challenge in my life and something that I will be working to overcome."

"It does get uncomfortable at times and being a sportsman, I want to be active and outdoors but, without a pupil, I find any amount of sunlight very harsh and have thus been restricted to the confines of my home.

Boucher said that he was in the process of setting up a non-profit company which will help in the fight against rhinoceros poaching in South Africa and Africa.

He has also started a wine label with his friend, South Africa all-rounder Jacques Kallis.

© Copyright 2022 Reuters Limited. All rights reserved. Republication or redistribution of Reuters content, including by framing or similar means, is expressly prohibited without the prior written consent of Reuters. Reuters shall not be liable for any errors or delays in the content, or for any actions taken in reliance thereon.
Related News: Mark Boucher, South Africa, Jacques Kallis, Proteas, England
COMMENT
Print this article