Half centuries from Alistair Cook (96), Eoin Morgan (79) and Matt Prior (73, batting) helped England take control of proceedings on Day 1 of the second Test against Sri Lanka at Lord's on Friday.

England were 342 for 6 at close of play on a day when Cook narrowly missed a century.

Earlier, Cook produced yet another innings of monumental patience and application to restore England's fortunes on the opening day. 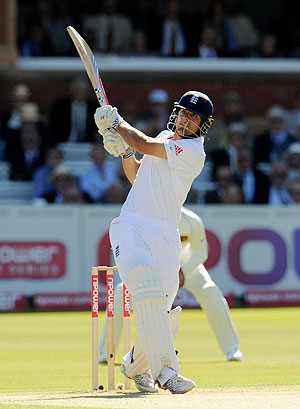 The England opener, who has scored five centuries in his previous eight Tests, watched from the other end as the first three wickets fell with only 22 runs on the board.

He then helped Ian Bell (52) add 108 for the fourth wicket and at tea he was still at the crease with 75 to his name and the England total on 165 for four.

Sri Lanka, who were blown away in their second innings in the first Test in Cardiff, responded by selecting four pacemen for Lord's and then asking England to bat after Tillakaratne Dilshan had won the toss on a gloriously, sunny morning.

Dilshan's primary concern may have been to postpone a confrontation with the tallest pace-bowling trio in history after his batsmen capitulated so abjectly to the short-pitched ball during the innings defeat in Cardiff.

But whatever his motives, the decision was fully vindicated when Andrew Strauss (4), Jonathan Trott (2) and Kevin Pietersen (2) were dismissed in the space of half an hour.

Left-armer Chanaka Welegedara, moving the ball late at a lively pace from the Pavilion End dismissed Strauss lbw and Trott fell in similar fashion playing across the line to Suranga Lakmal. Pietersen failed for the second time in the series when he was acrobatically caught at gully by Dilshan off Lakmal.

Lakmal troubled Bell outside the off stump in a 10-over opening spell but the batsmen survived until lunch with the score on 75 for three.

Dihara Fernando bowled with genuine pace after the interval from the Nursery End, peppering Bell with several short-pitched deliveries which hurried the batsman.

Cook continued unperturbed, reaching his half-century with his ninth boundary, an authoritative pull stroke, from 90 deliveries.

Bell unfurled some sweetly timed drives to pass his fifty, which also brought up the 100 partnership, before he was caught at first slip by Tharanga Paranavitana off Welegedara's first over of a new spell from the Nursery End.

Eoin Morgan joined Cook and lofted left-arm spinner Rangana Herath over mid-wicket for the first six of the match to bring up the 150. Cook, by now in total command, thrashed Fernando twice through the covers for four in the same over.