'In that first Test we played him nicely. He did bowl nicely, we know going into the fourth innings we can play Ashwin well' 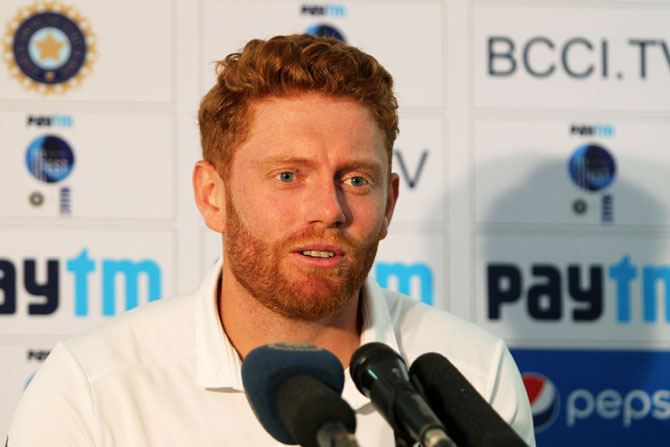 IMAGE: England 'keeper Jonny Bairstow at the press conference on Day 3 of the 2nd Test in Vizag on Saturday. Photograph: BCCI

Ravichandran Ashwin might have broken England's backbone with his five-wicket haul, but wicketkeeper-batsman Jonny Bairstow feels that his team would be able to handle the Indian off-spinner in the fourth innings of the ongoing second Test.

Courtesy Ashwin's five for 67, India bowled out England for 255 in their first essay to take a commanding lead of 200.

"In that first Test we played him nicely. He did bowl nicely, we know going into the fourth innings we can play Ashwin well," he said, recalling the drawn Rajkot Test, where the world No.1 bowler had a listless match haul of 3/230.

Bairstow and Ben Stokes (70) consolidated the innings, taking England to 190/6 from 80/5 at one a stage before eventually folding for 255 in reply to India's first innings total of 455. Ashwin struck in the second session of the day en route to his maiden five-wicket haul against England.

At close of play, India had already stretched their lead to 298 with two more days to go.

"I think it's important for us to try and make it as difficult as possible for India to score runs at a rate they want to score. The longer we can delay the amount of runs they score, puts up in a better position. We will try our hardest in the morning session to restrict the amount of runs and try to take a few wickets. Definitely, it will be hard on the pitch with our bowlers. IMAGE: Ben Stokes of England celebrates his half century against India on Saturday. Photograph: BCCI

"When we bat whenever it may be there's uneven bounce on the pitch. We will try to chase down whatever is set. We got to be still positive. At the end of the day, it's still the run chase. That's the exciting part of it however many that may be," he said about England's survival plan.

Having tripped while walking out to bat, Bairstow defied pain and played a fine innings off 152 balls with five fours and along with Stokes, became the most-prolific pairing in 2016, getting past Alastair Cook and Hales.

"We complement each other being left and right. We rotate the strike pretty well. It's just comb of everything that seems to work nicely," he said.

"We are pretty happy with the way Ben and I played and then (Adil) Rashid chipped in. Coming at the end, I thought he played really nicely. We needed to show a little more fight in rest of the game be it in the first or fourth innings.

"The fight comes in many different ways, be it with the bat, ball or field. Me as a keeper I'm always looking for guys to be in right position. I think we showed some nice fight today and taking three in the evening session was a strong comeback within today's passage of play," said Bairstow.

Asked about his freak injury this morning, he said: "I tripped up, made myself look like a wally I hurt my knee a bit so I turned round and went back for some treatment. My boot got lodged in the turf and just meant that I twisted a bit but I should be alright.

"It was sore, don't get me wrong, but it was one of those things and didn't affect me too much. It was just a pain in the backside or rather the knee." 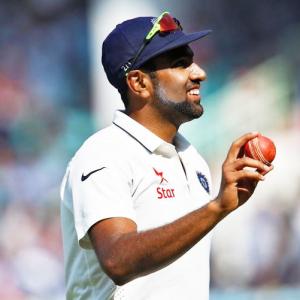 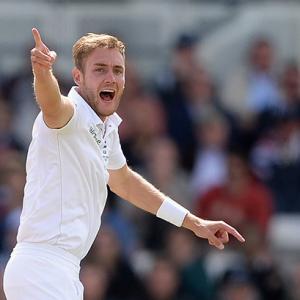 Broad suffers tendon strain but will continue to bowl