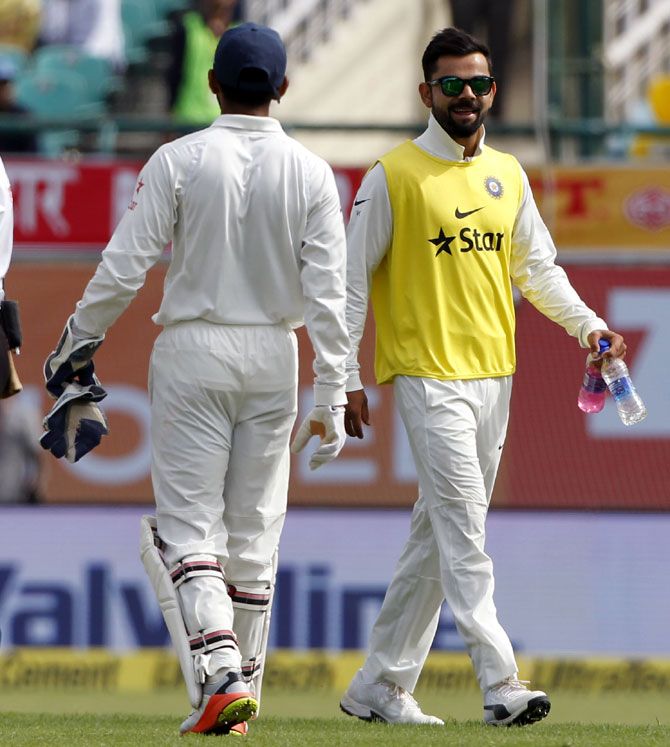 IMAGE: Virat Kohli brings drinks for his teammates on Day 1 of the 4th Test in Dharamsala on Saturday. Photograph: BCCI

A shoulder injury did not stop skipper Virat Kohli from being there for his boys on the field as they took on Australia in the fourth deciding Test in Dharamsala on Saturday.

During the drinks break, Kohli trotted out onto the field laden with drinks for his teammates, which earned him a resounding applause from the stadium and the commentators went gaga.

"Look at who has got the paani for everybody -- 12th man Virat Kohli," said former Indian batsman Sunil Gavaskar.

One Rodney Hogg‏ (@RMHogg) tweeted: "Love your work Virat Kohli.  Running drinks out and talking to youngsters at fine leg. What great in the history of the game wld do that?”.

The Virat Kohli fan club on Twitter did what they are meant to – praise their favourite player.

“Virat Kohli came serving drinks to his teammates ! Simplicity, Selfless, Teamman level= @imVkohli,” the admin of the group wrote on the Twitter handle.

One parody account (Sir Ravindra Jadeja‏ @SirJadeja) tweeted: “Wow! Virat Kohli Bringing Drinks For His Teammates. He Just Won 1.2 Billion Hearts, Again. And Haters Say He's Arrogant. He then followed it up with a gem: “ Virat Kohli Came Up With Drinks To Prove That He's Not Watching #Phillauri. #INDvAUS #INDvsAUS #Kohli”.

Some fans also compared the gesture to that done by Sachin Tendulkar, who had done the same in 2004. The legendary batsman, who was out of the Bangalore Test vs Australia due to tennis elbow, had carried drinks for his teammates during that Test. 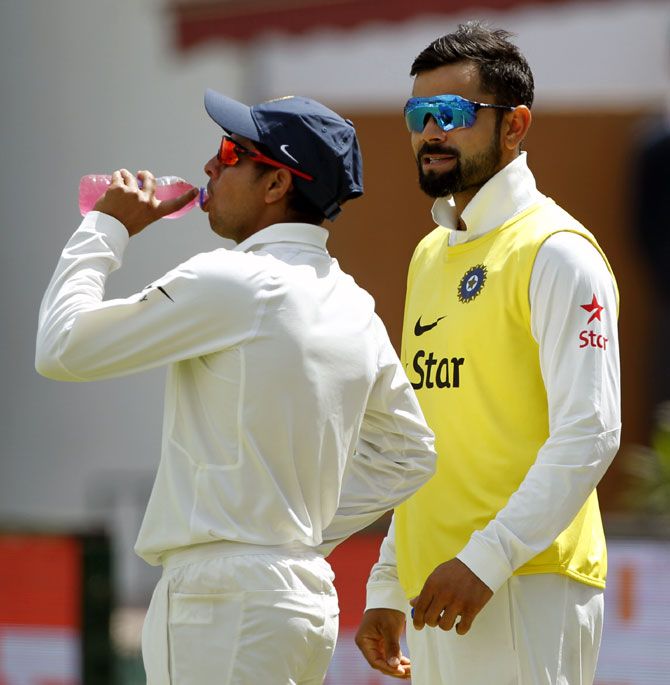 IMAGE: Kohli had some words of advice for debutant spinner Kuldeep Yadav at the drinks break. Photograph: BCCI

Former Australia pacer Brett Lee, who is also commentating quipped saying, "This is fantastic. He must be the most expensive drinks man in the world!"

The development caught the internet by storm and the love began to pour in on Twitter from fans and cricketers alike.

Kohli also made a second entry into the field later with drinks and was seen having a few words with debutant Kuldeep Yadav, who had just then scalped the wicket of David Warner.

Australia were 131 for 1 against India in their fourth cricket Test at Dharamsala in Himachal Pradesh, at lunch.

Opener Warner, 54 and Captain Smith, 72 were at crease. For India, Umesh Yadav took the lone wicket of Renshaw, who went out at one. Earlier, Australian captain Steve Smith won the toss and elected to bat.

By tea, India were in the driver's seat as Kuldeep Yadav claimed three wickets on debut to help India restrict the tourists to 208 for six at the break.

Ajinkya Rahane is leading India in the deciding Test as Virat Kohli was ruled out following a shoulder injury, causing a major blow to the hosts.