West Indian Deandra Dottin became the first woman cricketer to hit a Twenty20 International century, also the fastest ever in this format, when she blasted a 40-ball unbeaten 112 against South Africa in the World Cup.

Dottin completed her century in just 38 balls, with nine sixes and five fours, and later added two fours from as many balls as the Women's World Cup got off to a stupendous start on Wednesday.

Riding on her heroics, the West Indies beat South Africa by 17 runs.

Batting at number six, the Barbadian eclipsed the fastest hundred in the men's game hit by her compatriot Chris Gayle which he had scored off 50 balls, also against South Africa in 2007.

Her first 50 came in 25 balls three more than her own record of 22 balls set last year but the second 50 took just 13 deliveries.

Dottin's sixth wicket partnership of 118 with Shanel Daley is also the highest in any male or female Twenty20 match comfortably, beating the record of 77 set by Australia's Ricky Ponting and Michael Hussey in Auckland in 2005.

West Indies total of 175-5 was also the highest total by any women's team in this format while South Africa's gallant chase, in which Shandre Fritz scored 58, was the second highest score by a side batting second in womens Twenty20 cricket. 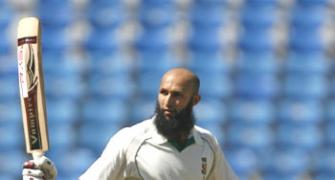