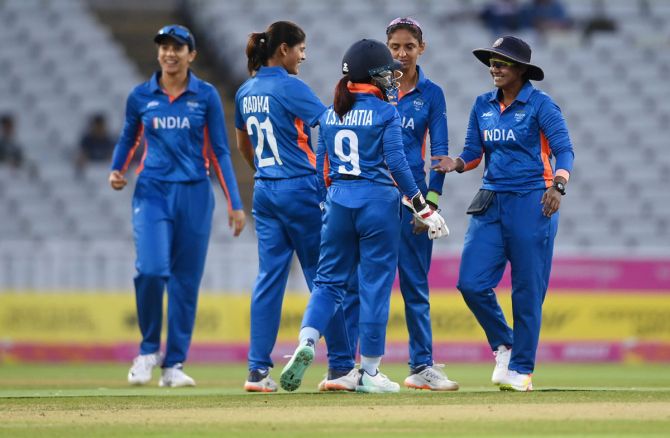 IMAGE: The Indian players celebrate a wicket during the women's T20 cricket match against Barbados at the 2022 Commonwealth Games on Wednesday. Photograph: Alex Davidson/Getty Images

Medium pacer Renuka Singh ran through Barbados' top order with a four-wicket haul as India beat their lowly opponents by 100 runs to qualify for the semi-finals of the women's T20 cricket at the Commonwealth Games in Birmingham on Wednesday.

Put into bat, India posted a competitive 162/4 on the back of a fine unbeaten half-century from Jemimah Rodrigues (56 not out off 46 balls) and a 26-ball 43 from opener Shafali Verma.

The Indians then restricted Barbados to 62/8 in 20 overs with Renuka bamboozling the Barbados batters with an impressive spell.

Kyshona Knight was the top-scorer for Barbados with 16 while Shakera Selman made 12. Seven of their batters failed to reach double-digit figures. 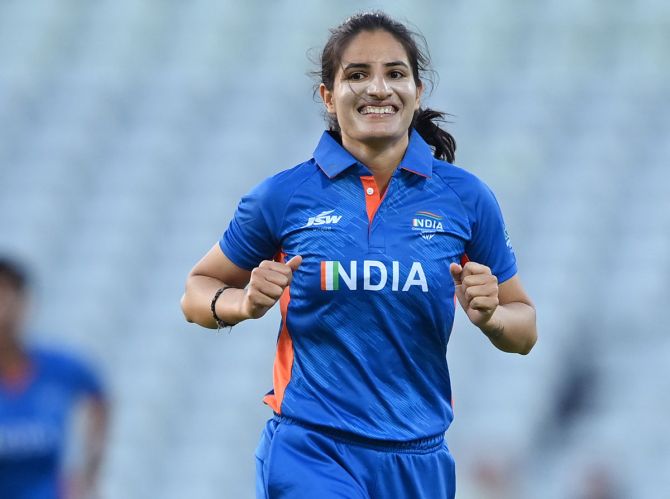 Barbados were dismissed for 64 in their nine-wicket defeat against Australia in an earlier match.

With the win, India finished second behind Australia (6 points from 3 matches) in Group A with four points from two wins. They had beaten Pakistan and lost to Australia in their earlier matches.

The semi-finals will be played on Saturday.

Renuka struck with the third ball of the Barbados innings, removing opener Deandra Dottin for a duck. She then dismissed captain Hayley Matthews (9), Kycia Knight (3) and Aaliyah Alleyne (0) in quick succession to reduce Barbados to 19/4 in nine overs.

During the Indian innings, opener Smriti Mandhana (5), who hit a half-century in India's win over arch-rivals Pakistan, fell cheaply but Verma and Rodrigues stitched a 71-run stand for the second wicket to prop up the innings.

India were, however, in a spot of bother as captain Harmanpreet (0) departed just three balls after Verma's dismissal. But a 70-run partnership between Rodrigues and Deepti Sharma (34 not out) for the unbroken fifth wicket took India to a good total. 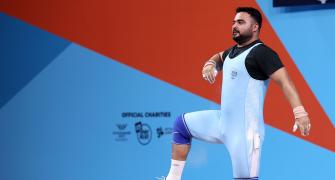 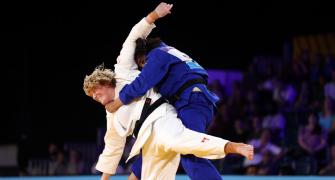 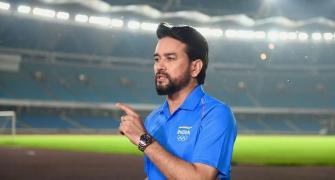 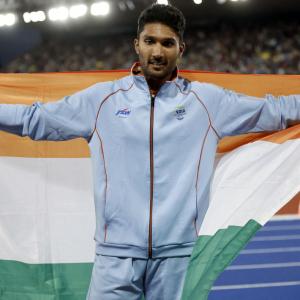 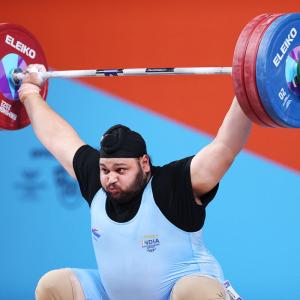