'In terms of a great first year, it was an amazing summer and hopefully, I can better that this time... Hopefully, against a side like India, testing yourself against one of the best bowling attacks in world cricket at the moment' IMAGE: Having played a few ODIs against India and a Test match during the last series, Marnus Labuschagne feels he won't be short of confidence during the December-January series. Photograph: Stu Forster/Getty Images

He has played just one Test against India but Australian swift-riser Marnus Labuschagne is confident of "staying a step ahead" of the world-class attack come December even though Jasprit Bumrah is "hard to get past".

A rookie, Labuschagne had played one Test against India in Sydney during the 2018-19 series and the eagerly-awaited four-match series in December will be an acid test for the fast-rising batsman after his stellar initiation to longest format of the game.

"They are all good bowlers but it is hard to get past Jasprit Bumrah," the 26-year-old told PTI in an exclusive interview from Brisbane.

"He has the ability to consistently bowl around 140 kmph and swing the ball when conditions are suitable. He is also able to angle the ball back in at the stumps.

"You always want to test yourself against the best. Jasprit is probably the leader of that attack," said Labuschagne, who averages over 63 after 14 Tests with four hundreds and seven half centuries.

"Ishant has been very good during the last couple of years. Coming over here and angling the ball back into right handers, that would be a good challenge for us also," said one of the most talked about young players in world cricket right now.

The second season is always tough for any player as the opposition tends to have a better grasp of a player's game and Labuschagne understands that.

"In terms of a great first year, it was an amazing summer and hopefully, I can better that this time... Hopefully, against a side like India, testing yourself against one of the best bowling attacks in world cricket at the moment," he said.

Having played a few ODIs against India and a Test match during the last series, the right-hander feels he won't be short of confidence during the December-January series.

"I have played one Test against India in Sydney. I have a bit of experience of facing their attack in that Test and later when I came to India for white-ball series," he said.

"Naturally, when you do well, then people start picking your game, working on how you play. So, I have to make sure that I understand my game well, so when Indian bowlers come at me, I have to ensure that I am one step ahead."

And planning is where Labuschagne is lucky to have someone like Steve Smith in his corner as he goes around picking the former skipper's brains on batting in different conditions.

"I have learnt from him and the way he goes about his game and added that to my game which makes me better as a player. We both love talking about cricket and batting so I am lucky enough to learn from him." What's the best advice that Smith has given him?

"One thing I have learnt from Steve is the ability to play the conditions, knowing which bowlers to take on and not just playing a generic game," he revealed.

None other than Sachin Tendulkar has praised Labuschagne's technique and temperament after watching him in the Ashes last year.

"For someone (Tendulkar) of his calibre speaking highly of me is an amazing feeling. I haven't yet met him in person. We missed each other on a few occasions. Can't wait to meet him as there is a lot to learn from a player of his stature."

Does he miss playing IPL like some of his illustrious teammates who claim to have benefitted immensely from the league?

"I can only do well in the format or team I am playing for. I have got opportunity in ODI cricket (average of 50.83 and strike rate of 94.42) and I have been able to make most of that at No 4 so far.

"Personally, if I get to play in the IPL, I will put my best foot forward. I have had a taste of playing in India in those conditions. Playing in IPL would be a great privilege."

At 26, the batsman could well be considered a candidate for the captain’s role. He would accept it graciously if the opportunity comes but right now, the focus is to cement his place further in the current set-up.

"I think it's every kid's dream to captain their country. So, if I say that I wouldn't want that, it wouldn't be true. I would like to captain my country as it will be a great privilege and honour.

"But right now, it's just about making sure that I focus being Australia's No 3 in Tests and No.4 in ODIs. I want to make those spots my own and contribute to Australia winning matches.

"While doing this, if an opportunity comes to captain Australia, hopefully I will be ready then and take that in my stride."

A deeply religious person, Labuschagne has a verse of the Bible -- Isaiah 40:31: For those who hope in the Lord, he shall renew their strength -- inscribed on the back of his bat. In a highly competitive sporting world, faith in religion gives him direction and perspective.

"Religion gives me perspective. At some point, I can be obsessive about cricket but there are more important things in life rather than only playing the game that I love. And I am happy that I have been brought up in such a manner," he concluded. 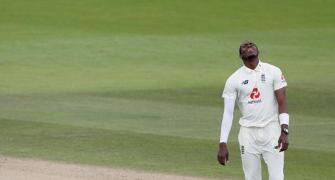