Yorkshire rode on Gary Ballance and Adil Rashid's batting heroics to qualify for the main draw of the Champions League Twenty20 with a comfortable six-wicket win over Trinidad and Tobago in Centurion on Wednesday.

Chasing Trinidad's 148 for nine, Ballance (64 off 37) and Rashid (33 off 27) lifted Yorkshire from a difficult position with an unbeaten 103-run partnership fifth wicket partnership.

Ballance struck as many as six sixes and two fours while Rashid decorated his innings with three hits to the fence and one over it.

Ravi Rampaul and Samuel Badree returned with identical figures of one for 22 for the Caribbean outfit.

With two wins from as many games, Yorkshire stormed into the main draw of the tournament from Pool 2. Trinidad, unfortunately, have crashed out of the event after just one outing, which means their final match against Uva becomes inconsequential.

Earlier, Denesh Ramdin led from the front with a scintillating half-century while Darren Bravo scored a vital 45 to help Trinidad and Tobago post a competitive 148 for nine. 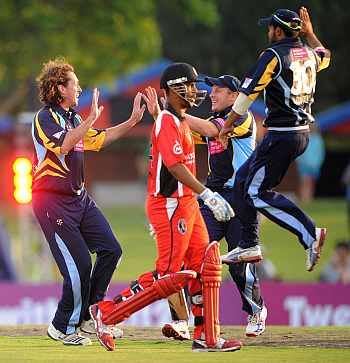 Ramdin scored 59 off 40 deliveries, while Bravo's 45 came off 49 balls as they combined beautifully to rescue Trinidad from a precarious position with a 93-run fourth wicket partnership.

Chasing 149 for win, Yorkshire did not have the best of the starts as they slumped to 51 four by the ninth over.

Openers Phil Jacques (6) and skipper Andrew Gale (2) failed to provide any significant contribution for the English outfit and perished in consecutive overs.

Joe Root (16) and Adam Lyth (18) both got starts but failed to capitalise on them and became victims of Yannick Ottley and Rayad Emrit, leaving Yorkshire's chase in disarray at 51 for four.

But if the Caribbean players thought they had a grip over the match, they were in for a rude shock as Ballance and Rashid had other plans.

Ballance and Rashid joined hands and stitched -- for -- to keep Yorkshire in the hunt.

While Rashid played the role of an aggressor initially, Ballance opened his arms after setting his eye in.

Ballance used his long handle to great effect towards the end clobbered Lendl Simmons for two sixes in the 16th over.

Emrit too had to face the brunt of Ballance's ire as the left-hander hit him for a six and a four to bring down the equation to 17 off 18 balls for Yorkshire.

From there on victory was just a formality for Yorkshire and Ballance completed the proceedings in style, smashing Kevon Cooper for two huge sixes to finish off the run chase with seven balls to spare.

For Trinidad skipper Ramdin and Bravo rose to the occasion and saved the West Indies side from the humiliation.

While Ramdin was at his attacking best, Bravo played the second fiddle in the partnership.

Just when it was time for the Caribbean duo to accelerate, Yorkshire made a comeback with two quick wickets.

Bravo was the first to depart, holed out in the deep by Gary Ballance off Rashid and then a ball later Jason Mohammed fell victim to an unnecessary mix-up with Ramdin.

The dismissals, however, had little effect on Ramdin as he brought up his first Twenty20 half century with a four.

But Ramdin's terrific innings finally came to an end in the most unfortunate manner. Turning for the second run, he lost his footing and was run out after Cooper sent him back.

For Yorkshire, Ryan Sidebottom starred with the ball with figures of three for 13 from his four overs.