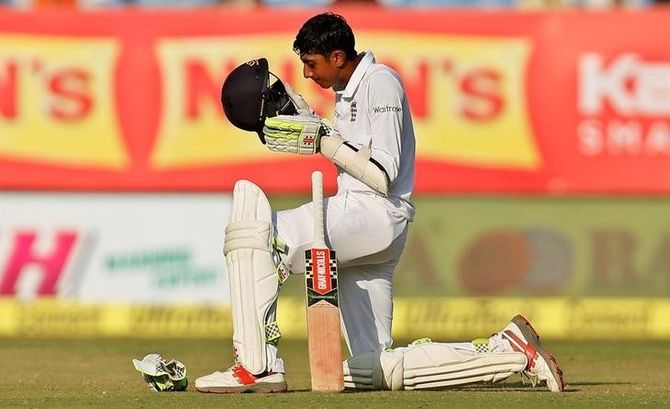 England's protracted search for a long-term opening partner for captain Alastair Cook could be over after teenager Haseeb Hameed showed great skill and maturity to score his maiden test fifty on debut against India on Saturday.

The 19-year-old Hameed is Cook's 10th partner at the top of the order in the game's longest format since the retirement of Andrew Strauss four years ago.

Hameed is the youngest opening batsman to play a test for England and he did justice to the faith shown in him by the selectors with a composed unbeaten 62 in the second innings on the fourth day of the opening test.

He added 114 for the first wicket with Cook, who was not out on 46, which gave England an overall lead of 163 against the world's top-ranked test side and a position from where they can dictate the game on the final day.

"He's a very clever and solid boy, works hard in the nets and he's a great talent and he showed that as well today in his 50-odd. Hopefully he can carry on tomorrow."

In the first innings, Hameed was out lbw to India off-spinner Ravichandran Ashwin, the world's top-ranked bowler in tests, after contributing a solid 31.

The right-hander showed his frustration and probably his inexperience by wasting a review on a decision which looked in little doubt.

But he made amends by handling Ashwin, who has won four consecutive man of the series awards, extremely well.

"He's very calm, he's very organised and he has got a good sense of humour," added Rashid, who took four wickets in India's first innings.

"I think he's fitted very well into the dressing-room.

"Hopefully, he can carry that on for many more years to come."

Yorkshire leg-spinner Rashid caught a glimpse of Hameed, who plays for Lancashire, in August in the County Championship when the batsman scored centuries in both innings of the match.

"I first saw him play then," Rashid said. "He played seam exceptionally well and also spin too, using his feet.

"So I wasn't surprised at all how he came out and played here. His batting is very clued up and to see him get the runs here is a good feeling."

© Copyright 2021 Reuters Limited. All rights reserved. Republication or redistribution of Reuters content, including by framing or similar means, is expressly prohibited without the prior written consent of Reuters. Reuters shall not be liable for any errors or delays in the content, or for any actions taken in reliance thereon.
Related News: Adil Rashid, Haseeb Hameed, Alastair Cook, England, Ravichandran Ashwin
COMMENT
Print this article