India 'A' dominated as their bowlers' disciplined performance reduced West Indies 'A' to 212 for eight on the opening day of their four-day unofficial second Test in Kingstown.

Dinda led the visitors' attack to finish with two for 22, while Rohit picked up two for 31 and Ahmed, two for 43.

The batsmen who made noteworthy contributions in the day were opener Kraigg Brathwaite (66 batting) and Veerasammy Permaul (36).

The toss did not favour the Indians as West Indies 'A' elected to bat but the decision soon boomeranged on them as the visiting bowlers began to strike at will.

The first blow to the Windies line-up came pretty early in the game when opener Justin Gullien (5) was caught by Manoj Tiwary off an Ahmed delivery.

Brathwaite showed grit to remain unaffected by the collapse around him and struck seven fours, playing out 292 deliveries in the day.

Brathwaite found a steady partner only at the bottom of the line-up in Permaul, whose 40-ball 36 was studded with five fours and a six. Permaul's entertaining knock was ended by Dinda, who penetrated his defence to castle him.

After accurate first spells by Dinda and Ahmed, India 'A' skipper Cheteshwar Pujara introduced Rahul Sharma and the leg-spinner almost immediately made an impact sending back number three Donovan Pagon who lost his leg stump while trying to hit one over the top.

The duo of Brathwaite and Bonner then added 48 runs for the third wicket but the Indian bowlers remained dominant backed up by some good fielding.

Bonner added just eight after lunch before rushing down the wicket to left-arm spinner Akshay Darekar and finding himself stumped to leave the hosts on 71 for three. Bonner faced 47 balls in 49 minutes and counted four fours.

Rohit Sharma then enjoyed a good spell as West Indies A lost four wickets for 59 runs to slip to 130 for six.

But Brathwaite came to his side's rescue, anchoring two partnerships to keep the Indians at bay and see his side past the 200-run mark. He added 34 for the seventh wicket with Jason Holder, who scored 20, before the 47 with Permaul. Holder faced 34 balls and struck one four and a six before edging Ahmed behind. 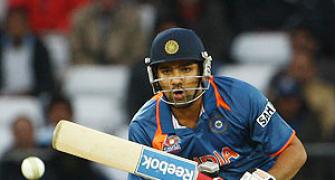 Rohit gives India 'A' lead against West Indies 'A' 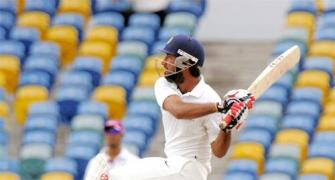 PHOTOS: Pujara leads India 'A' to thrilling win in Windies

India A off to a good start against WI A