It was on August 14, 1990, when Former Indian cricketer Sachin Tendulkar made his mark on the field, scoring his first Test ton in the international cricket.

Tendulkar scored 119 runs against England in 1990, helping India save the match at Old Trafford.

"#ThisThatDayYear: Rewind to 1990 and the world witnessed @sachin_rt 's maiden international ton. At the tender age of 17, the little master scored his first ton in whites at Old Trafford. What a moment," Board of Control for Cricket in India (BCCI) tweeted.

"#OnThisDay in 1990, Sachin Tendulkar made the first of his hundred international hundreds. His unbeaten final-day 119 helped India save the second Test against England at Old Trafford, and made him Test cricket's third-youngest centurion," International Cricket Council (ICC) tweeted.

Even fans were overwhelmed to voice their opinion about Tendulkar on Twitter and started #MaidenCentury as one of the top hashtag trends in India.

"The journey of 100 hundred's started here. From a 17-year-old boy to God of cricket, from a handy middle-order batsman to the greatest cricketer ever the every bit of your transformation inspired millions of people. No matter what your fanboy forever #MaidenCentury #SachinTendulkar," one fan wrote.

"#MaidenCentury, this day on that year, and he doesn't know that he is gonna change the face of Indian cricket," another fan tweeted.

Earlier this year, Tendulkar became the sixth Indian to get inducted into the ICC Hall of Fame.

"It is an honour to be inducted into the ICC Cricket Hall of Fame, which cherishes the contribution of cricketers over generations. They have all contributed to the growth and popularity of the game and I am happy to have done my bit," Tendulkar had said.

The master blaster has set the standard extremely high for modern-day cricketers. From becoming the highest run-scorer in the history of Test (15,921) and ODI (18,426) cricket, respectively, the former India batsman holds the record for 100 international centuries.

The 46-year-old made his debut for India at the age of 16 and immediately became the country's favourite cricketer. He aggregated 34,357 runs across formats, which is more than 6,000 runs ahead of the second-placed former Sri Lanka cricketer Kumar Sangakkara.

Tendulkar, who made his Ranji Trophy debut during the 1988-89 season, scored a century for Mumbai on his debut against Gujarat at the age of 15. He finished as his side's top-scorer for the season. Soon after, he received his maiden Test call-up for India's tour to Pakistan in November 1989.

At the age of 37, Tendulkar played his final World Cup that turned out to be a fruitful campaign for India. The Men in Blue defeated Sri Lanka by six wickets at home in the 2011 edition which made Tendulkar a member of the World Cup-winning team and he ended up becoming India's leading run-scorer and second overall at the tournament.

He retired from the 50-over format in 2012. He scored his hundredth century in his second last match. Tendulkar played his last Test against West Indies at home in November 2013, which was his 200th match.

The master blaster has been serving as a mentor to the Mumbai Indians that competes in the Indian Premier League (IPL). 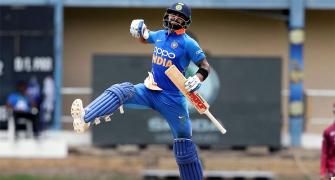