In what turned out to be a good day for India in the park, spinner Ravichandran Ashwin scalped his 23rd five-wicket haul in Tests, while opener M Vijay struck his 15th half century.

Here are the statistical highlights from the second day’s play of the fourth cricket Test between India and England at the Wankhede Stadium in Mumbai. 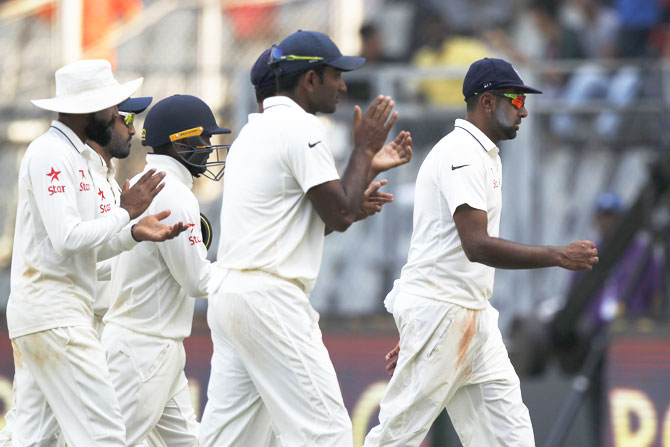 IMAGE: R Ashwin leads the team out after picking five wickets on Day 2 of the 4th Test in Mumbai on Friday. Photograph: BCCI

# Ashwin's excellent figures of 6 for 112 are his best vs England in Tests, surpassing the 5 for 67 at Visakhapatnam in November 2016.

# Ashwin's second five-wicket haul vs England is his 23rd in Tests. Only two Indian bowlers have more such five-wicket hauls in Tests -- Anil Kumble (35) and Harbhajan Singh (25). Kapil Dev had also produced 23 such instances.

# Ashwin's feat of 23 instances of five-wicket hauls in 43 Tests is bettered only by Sydney Barnes, who had achieved the distinction in only 27 Tests.

# Ashwin has taken five wickets or more in an innings seven times this year. For the second time in his career, he has registered seven five-wicket hauls -- the first occasion being last year. Apart from Muralitharan's tally of recording the feat four times, no other bowler besides Ashwin has achieved the same more than once.

# Since January 2015, Ashwin has taken five wickets or more in an innings 14 times in 20 Tests -- the most by any bowler during this period. Two bowlers have produced seven such hauls each since January 2015 -- Yasir Shah and Rangana Herath while James Anderson and Mitchell Starc have claimed five instances each.

# Ashwin's feat of 14 five-wicket hauls since January 2015 has equalled the most such instances by any bowler in a two-year period. Muralitharan had accomplished the feat twice -- between 2000 and 2001 and the second time between 2006 and 2007.

# In 26 home Tests, Ashwin has produced 18 five-wicket hauls, equalling Harbhajan's tally in 55 Tests. Among the Indian bowlers, only Anil Kumble has produced more such instances in home Tests -- 25 in 63 Tests.

# For the eighth time, two Indian spinners (Ashwin 6/112 and Jadeja 4/109) have claimed all 10 wickets in the first innings of a Test match.

# Buttler's aforesaid innings is his second highest score vs India behind the 85 (a career-best) at Southampton in 2014.

# Buttler's 76 is the highest score by England's number seven player in Tests at Wankhede Stadium, Mumbai, surpassing the 62 by Paul Downton in 1984.

# Buttler's aforesaid score is the fourth highest by a visiting batsman number seven batsman at Wankhede Stadium, Mumbai -- the highest being Adam Gilchrist's 122 for Australia in 2001. 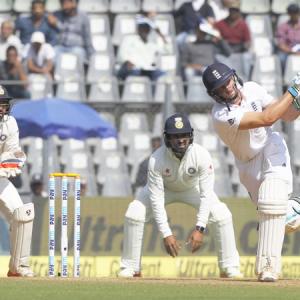 400 is a good score on the board: Buttler