England crumbled meekly to 107 for eight in reply to Australia's 481 to put the touring side firmly on course for victory in the final Ashes Test after a dramatic second day at The Oval on Friday.

Steve Smith's patient 143 guided Australia to a formidable total and the bowlers rammed home the advantage in the last session to boost their side's bid for a consolation win after relinquishing the Ashes by losing the fourth Test in Nottingham.

England's collapse was not quite as abject as when Australia were bowled out for 60 on the first morning at Trent Bridge but it was quite remarkable on a sun-kissed afternoon in south London. Adam Lyth's wretched run continued when, on 19, he spooned an attempted pull off Peter Siddle to Mitchell Starc at mid-on.

Siddle, recalled in place of the injured Josh Hazlewood, produced a superb delivery to bowl Ian Bell for 10 and Joe Root nicked Mitchell Marsh to keeper Peter Nevill after labouring for 39 balls to make six.

Jonny Bairstow, on 13, tamely pulled Mitchell Johnson to Lyon at square leg, Jos Buttler was bowled by Lyon for one and Ben Stokes skied Marsh to Nevill for 15.

Stuart Broad edged Marsh to Adam Voges at slip for a duck before Moeen Ali and Mark Wood each made eight not out to take the hosts to the close without further loss, still 374 runs behind their opponents. 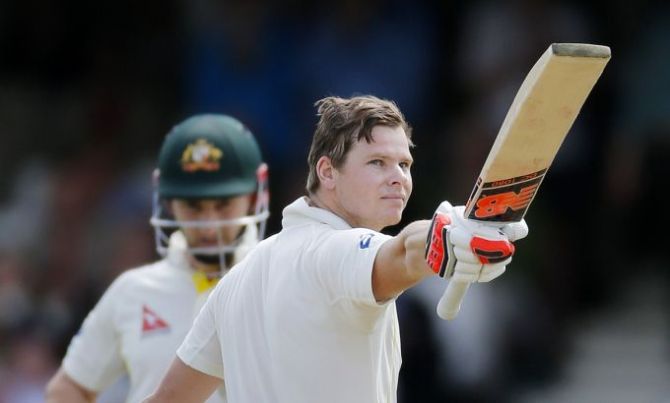 Australia had resumed in the morning on 287 for three and Smith waited until his 24th delivery to add to his overnight 78 while Voges played more freely.

The experienced right-hander cut Broad for four to reach his second fifty in a row and had scored 76 when he misjudged a fierce inswinger from Stokes that kept low and was trapped lbw.

Smith flashed hard at the very next delivery from Steven Finn and keeper Buttler took the catch, but the bowler immediately returned to the crease to check his footmark and replays confirmed that he had overstepped by several inches.

Finn looked distraught as Smith was recalled but he did claim a wicket when Marsh, on three, edged a lifting delivery to Bell at second slip.

Smith clipped Moeen for a single to bring up his 11th Test century, a patient effort spanning more than five hours at the crease. Nevill fell for 18, feathering a catch to Buttler down the leg-side off Moeen and the spinner bowled Johnson for a second-ball duck just before lunch.

Smith's long vigil ended when he dragged a ball from Finn on to his stumps and he departed to a standing ovation having hit two sixes and 17 fours.

Starc struck a six and nine fours in a breezy 58 off 52 balls before he was lbw to Stokes and Siddle was caught by a diving Lyth at gully off Finn to end the innings.

© Copyright 2022 Reuters Limited. All rights reserved. Republication or redistribution of Reuters content, including by framing or similar means, is expressly prohibited without the prior written consent of Reuters. Reuters shall not be liable for any errors or delays in the content, or for any actions taken in reliance thereon.
Related News: Mitchell Marsh, Nathan Lyon, Australia, Investec Ashes Test, Steven Finn
COMMENT
Print this article