Johnson, the 2009 ICC Cricketer of the Year, finished the first Test in Brisbane with figures of 0-170 as England batted for two days to rescue a draw.

"Mitchell Johnson is out of the 12 so we're down to the other quickies," Ponting told a news conference at the Adelaide Oval.

"The selectors felt he was down on a bit of form and down on a bit of rhythm and that was highlighted in the last match. And as we all know Test match cricket is hard enough without having to try and find that kind of thing as well."

His departure leaves Australia with a 12-man squad for the Test, which starts on Friday, with Doug Bollinger and Ryan Harris both vying for their Ashes debut. 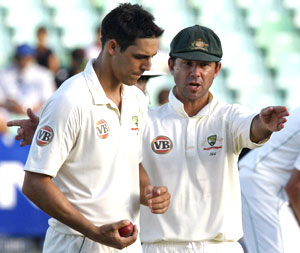 "It's obviously disappointing but it's not the end of the world," said Johnson. "I didn't perform in that Test match. I'm a strike bowler for Australia and I need to be getting wickets.

"Mentally I felt fine throughout that Test match, whereas in the past if I didn't get any wickets I'd have been yelling into my hat. I just need to keep to keep working on my bowling."

Ponting suggested that both Bollinger and Harris might be included, that latter at the expense of Ben Hilfenhaus, when the team was announced on Friday morning.

"There's competition for every spot on our team and that's always been the case since I've been playing international cricket," Ponting said.

"Hilfy's strength are his ability to swing the new ball. He's a very consistent bowler, he bowls in good areas, he's able to tie bowlers down as we saw in the Brisbane Test at various time.

"Ryan's strengths are he's grown up here, he's played all his cricket here, he's probably slightly quicker in the air, he probably hits the ground harder than Ben.

"You put all that together and it makes that decision a pretty tough one, that's why we need a fair bit of time to think about it."

Bollinger was the last man dropped from the first Test squad in favour of Peter Siddle, who went on to take six wickets and a hat-trick in England's first innings.

Harris has recently returned to first-class cricket after knee surgery but Ponting said he was definitely fit.

"We're not worried about Ryan's knee at all," he said. "If we were concerned about his knee, we wouldn't have included him on our squad."

© Copyright 2020 Reuters Limited. All rights reserved. Republication or redistribution of Reuters content, including by framing or similar means, is expressly prohibited without the prior written consent of Reuters. Reuters shall not be liable for any errors or delays in the content, or for any actions taken in reliance thereon.
Related News: Ricky Ponting, Mitchell Johnson, Doug Bollinger, Ryan Harris, Ben Hilfenhaus
SHARE THIS STORYCOMMENT
Print this article 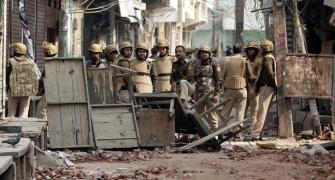