IMAGE: A screen grab of Arshdeep Singh putting down the catch to give Pakistan's Asif Ali is a reprieve. Photograph: Twitter

Arshdeep Singh can do with a warm hug from Chetan Sharma.

The wiry, whippy Chetan Sharma, who instead of becoming the "toast" had become the virtual "roast" of the nation 36 summers back just like it happened with Punjab lad on Sunday night.

Coincidentally, in case of Chetan, that match was also played in the UAE but not at the newly-constructed gigantic concrete structure that Dubai International Stadium is but the more informal Sharjah Cricket Stadium where VIP ticket holders could eavesdrop on the adjacent dressing room chatter or drop in a handwritten note with a landline number.

Chetan intended to bowl a yorker to Javed Miandad, who was the 'King of Sharjah' back then but managed a full-toss.

It was one bad ball for Chetan in that 1986 Austral-Asia Cup final, where he was simply unlucky to miss the length.

Back in those Doordarshan days, it used to be basic coverage and only now that IPL matches have been shown live from at Sharjah Stadium, we realise that it is a ridiculously small ground where sixes can be hit for fun.

Cut to 2022, Asif Ali's heave turns into a skier and Arshdeep, who would otherwise catch it 11 out of 10 times drops a sitter, much to the dismay of his teammates.

The two matches have been held 36 years apart but the boorish mindset of the masses to accept a simple human error had scarred Chetan for life back then and one can only hope that Sunday's missed catch doesn't create a deep gash in the mind of an impressionable 23-year-old, who, if all goes well, is certain to be one of the best T20 death bowlers in world cricket in near future.

The Indian public back then didn't spare Chetan and despite being one of those rare Indian bowlers to have a five-for in a Lord's Test and recording the first ever hat-trick in ODI World Cup, people remember that single delivery.

On Sunday night, what followed on social media after Arshdeep's missed catch couldn't be put in any mild terms.

Deplorable, disgusting and shameful are the words that come to mind while sifting through the social media accounts of so-called fans, who are calling Arshdeep names.

In fact, such was the vitriol, that some fans hacked and edited his wikipedia page, adding the objectionable term "Khalistani" by his name.

While the corrective measures were taken and the page was restored to its original form, the matter hasn't gone unnoticed as far as government of India is concerned.

Obviously, there were a lot of sane voices too but in the world of billion tweets, facebook and instagram posts per second, it is difficult to always differentiate between the good, the bad and the ugly.

The fans forgot that the same man, within minutes of dropping that catch, gathered his faculties and showed his temperament to get the same Asif leg before with a perfectly pitched blockhole delivery.

They forgot that he had only seven runs to defend and in the T20 Universe of 2022, that was just a cakewalk.

They forgot that even Hardik Pandya, Yuzvendra Chahal and Bhuvneshwar Kumar had an off-day.

"I remember when I played my first game against Pakistan (Champions Trophy, 2009), I was dismissed by Shahid Afridi. That entire night, I kept staring at the ceiling and thought I might never play for India again," senior pro Virat Kohli, recollected a pressure moment from his career and how Arshdeep will have to take it in his stride.

Funnily, less than a year after that 1986 match in Sharjah, there was another ODI in Kolkata where Saleem Malik literally pummelled the Indian attack to score 72 off just 35 balls.

Maninder Singh, the talented left-arm spinner, was taken to cleaners with utter disdain, but he never faced public wrath.

Waqar Younis, one of the greatest pacers of all time, was smashed by Ajay Jadeja in the 1996 quarter-finals in Bengaluru but it was Wasim Akram, whose house in Karachi was stoned.

He had to remain in Lahore as the public mood was against him, having missed the important game due to an injury.

It gives a sense that more than poor outings, people remember moments.

A last ball six, a dropped catch at the death or a missed knock-out match invokes stronger emotions than getting out for a duck or being hit for 80 in 10 overs.

At the end of the day, sport is all about moments and the moments do remain in subconscious mind of fans.

Some years back, distinguished cricket writer Osman Samiuddin had penned a book -- "The Unquiet Ones" based on Pakistan cricket.

It had an anecdote about a train journey during one of Pakistan's tours of India before brakes were put on bilateral contests.

During that journey, some of the well-known Pakistani journalists were travelling in the same compartment with Chetan, who by then was a TV analyst.

After some pleasantries exchanged, one Pakistani journalist gathered enough courage to start a conversation, something on these lines.

Apparently, before he could complete his question, Chetan knew what was coming and replied: "Yaar full-toss ho gaya thaa (It became a full toss)...."

It's the same with Arshdeep. Pressure situation, decibels reaching crescendo and a human error.

20 years down the line, Arshdeep could laugh and say, 'Oh!, woh ball nikal gaya tha hath se (it slipped out of my hands).'

In the end, it is never a "war", like some TV channels would want you to believe.

It's just a game. It was and it will remain one. 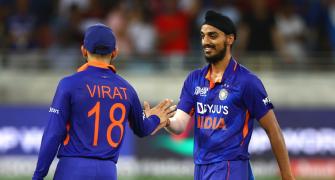 How Anushka Reacted To Kohli's 50 It's a good learning for us: Rohit after Pak loss