Why India will win the World Cup!

After the team's showing in the semi-final victory over Pakistan, Sumeet Anand is sure India will beat Sri Lanka in the final and emerge triumphant.

Yesterday's match has convinced me that this World Cup is ours, or let's say it's meant for giving the most desired offering to the "God of Cricket" -- Tendulkar, something I am sure he will agree matters more to him than getting even the Bharat Ratna.

The semi-final was amazing and had every hint that the two divine umpires "Bhagwan and Allah" mutually decided that India will win and it won't be a one-sided affair; that's the reason, why Sehwag was stopped from making it a one-sided match and they gave the strength and resolve to a rather inexperienced and new born Pakistani team to rise to the occasion and put up a great fight.

So here I am again following up my previous post on the semi-finals 'Indo-Pak WC semi-final: the emotional graph' with this one describing why and how India will win this World Cup.

The law prevailed and Yuvi went back on a duck on his home ground.? The Indian team is already performing as per the law and almost all batsmen and bowlers had their good and bad days whereas the Sri Lankan team has predominantly won all their matches on the performance of their openers or rather the first four batsmen and hardly any win came under pressure.

So now, in the final, the law will take over and they are not going to do as well, this is what India wants most. 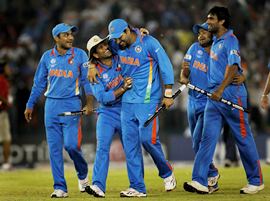 On the Indian side, the not so good performers till now, including Dhoni, Virat and Yusuf (he may play, as Gautam Gambhir got injured in the semi-final and may not be fit enough) are going to rise to the occasion and put up a great show.

India has consistently won all their matches under pressure and from a position where it seemed they may lose. It was always due to overall team performance and someone or the other chipping in at the right time to make India win. With the semi-final clash, the last remaining gaps in terms of weak/inconsistent bowling, performing badly in batting powerplays, and average fielding are all filled and now there is no doubt that this team's biggest strength is that it plays as a team and knows how to handle pressure in big games and come out victorious from seemingly desperate situations.

Statistics are there to change and Dhoni's men have proved it that stats don't matter; what matters is how you play on a given day. That's why for the first time we are going to have an all-Asian final, a final where both captains are wicketkeepers and no host team has ever won the World Cup.? All of this is going to change with this final, as it is sure that a host team will win, but India's chances are higher, as they are the main hosts of the event.

With Pakistan and Bangladesh both out of the tournament, naturally maximum fan support will be for India and almost all of them would love to see Tendulkar holding the Cup, a sight they will remember forever.?

One thing that came out clearly from the Indo-Pak semi-final is that the master blaster is having all the luck on his side, the five lives he got is there to prove that even the Almighty is leaving no stone unturned to make sure India wins it.?

Sri Lanka played all their games at home (except one, vs New Zealand @ Mumbai), so now playing at Mumbai, and that also the final, may make things difficult for them.? Moreover, Indians will be determined to take revenge of the 1996 semi-final loss to them at Calcutta.

Moreover, despite the odds faced by Dhoni and team during the various previous matches due to wrong decisions, selecting wrong players in the team at times, applying wrong strategies etc, luck favoured and they came out victorious.

Having said that, it didn't favour them just like that; they showed an awesome fighting spirit as a team and we all know luck favours the brave, so it will do so in the final too and will make India win.

Punters have pronounced India as the winners already and it seems it will be so as this team is totally clean and no one player can change the result by doing spot-fixing; moreover no Indian player will dare their career by doing any sort of fixing in the final.?

So punters cannot make more money if India wins; they can only make a fortune if Sri Lanka wins and you cannot fix a win; you can only buy players to intentionally lose. So they have no incentive in spot-fixing anything with the Sri Lankans as it will only make India win, a result that is going to make them lose more money.

How India will win: The divine plan

Now the most interesting part, people just love predicting, so let me try out too. I'll share what my intuition says. I think, it will be a perfect setting for Tendulkar to complete his 100 international centuries on his home ground and in a World Cup final, but given the jinx that mostly when Tendulkar scores a century, India ends up losing, so the only way it can happen isâ¦India will bat second and chase a target, the master blaster will be able to get the highest resolve to remove this jinx by not just scoring a hundred but a big one (with no extra lives), in which he bats till the end and ensures India wins. So that's how most likely it will be.?

If India bats first, then most likely Tendulkar will be out for a score of between 50-90 and the rest of the disciples of the 'God of Cricket', the likes of Yuvi, Dhoni and the rest, will rise to the occasion and put up a fighting total for Sri Lanka to chase.?

In the semi-final, a perfect two wickets each by all key bowlers is an indication that bowling is no more an issue and our bowlers will be able to defend any total that the batsmen end up putting.

Let's hope for a dream Saturday, April 2, 2011, when the whole nation will be praying and waiting to watch the happiest ending ever, like in a Bollywood movie (always predictable) of seeing their 'God of Cricket' holding the World Cup with a smile they have never seen beforeâ¦a sight every cricket fan, especially Indians, will take pride, watching live and cherish for generations to come!

Sumeet Anand is Founder and CEO of Kreeo (i-nable Solutions), a technology startup in the space of Enterprise 2.0 and collective intelligence.