Some say the rupee has already started to trade with a weaker undertone, recognising the sharp rise in the US dollar index, which touched a 52-month high of 86.746 on October 3 after the data indicated a drop in their jobless rate, notes Somasroy Chakraborty. 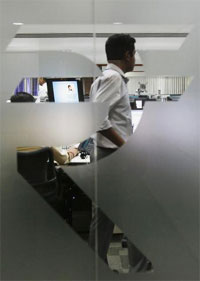 The volatility in the exchange rate of the rupee appears to be in the past.

The dollar has continued to climb against major currencies but the rupee has been unusually stable against the greenback for the better part of this financial year.

The formation of a stable government at the Centre, reinforcing hope of economic recovery, has led to strong inflow of foreign capital.

The rupee, thus, has mostly remained in the range of 58-61 to the dollar between May and September. In contrast, the US dollar index -- which measures its performance against a basket of six major currencies -- has strengthened from 79 to nearly 86 during this period, about nine per cent.

“The real story of the rupee so far has been its relative outperformance over other major currencies,” said Rohit Bhasin, head of fixed income and currency at Deutsche Bank in India. He believes this will sustain, as the Reserve Bank of India’s focus on inflation is providing a lot of confidence to offshore investors.

They feel the scope for further debt money (40 per cent of the $34 billion year-to-date portfolio flows into India) coming here is limited, with most of the open $25 billion quota for government bonds already taken up.

The recent rally in the equity market has also moderated return expectations.

Unless the debt quota is raised or the government unleashes major reforms that further boost investors’ confidence, the inflow of dollars might get limited. In fact, the possibility of a reversal is real, say many.

The euphoria surrounding India’s reforms is somewhat ebbing, while the US Federal Reserve is expected to increase rates sooner than later. “Our export growth is not strong and macro fundamentals remain weak.

The rupee’s relative outperformance might not last once capital flows start reversing,” said an economist.

Although declining crude oil and benign gold prices are a positive and mean lesser outflow of forex from India, the government has also maintained restrictions and duties on gold imports, which artificially support the rupee.

Some say the rupee has already started to trade with a weaker undertone, recognising the sharp rise in the US dollar index, which touched a 52-month high of 86.746 on October 3 after the data indicated a drop in their jobless rate.

There is also a school of thought that the rupee is becoming overvalued. One economist notes the 36-currency basket REER (real effective exchange rate) for the rupee at end-September was at 109.70, compared to its long-term average of 104.90.

Overvaluation can create a false sense of stability and encourages companies to leave their foreign currency exposures unhedged, a risk RBI has already sensed.

If the stability in the US fixed income market is disturbed, the rupee’s outperformance will be threatened.