Why India's hunger for petro products at 2-year high? 10 reasons

The growth, however, may not indicate a major revival of economic activity as it has been driven largely by the anticipated rise in crude oil prices in coming months 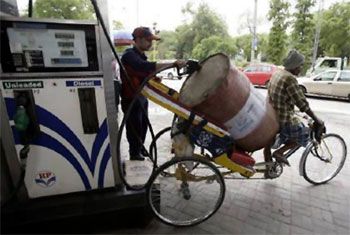 India’s consumption of petroleum products, including decontrolled items like petrol and diesel and non-subsidised cooking gas, grew by 9.3 per cent in February 2015, the highest in more than two years. However, the growth may not indicate a major revival of economic activity as it has been driven largely by the anticipated rise in crude oil prices in coming months, besides improved port traffic and vehicle sales, both of which are large users of fuel.

India consumed 14 million tonne (MT) of petroleum products in February, 9.3 per cent higher than 12.8 MT consumed in the same months last fiscal. “Except for naphtha, bitumen and aviation turbine fuel (ATF), all other products have recorded positive growth and a cumulative growth of 4.4 per cent during April 2014-February 2015,” the oil ministry’s technical arm Petroleum Planning and Analysis Cell (PPAC) said.

Here’s a list of 10 things that are driving the surge in fuel consumption:

Petrol consumption grew by 18.2 per cent in February, the highest growth in six months, and 11.2 per cent in April-Feb period. The anticipated downward revision in retail prices led dealers to maintain low inventories at retail outlets during end-January which were then topped up in early February.

The increase in global crude oil prices and the anticipated rise in retail prices during the entire month of February led dealers to keep high inventories at outlets. Petrol prices were increased on February 16 and March 1.

The high consumption was driven also by 8 per cent growth in passenger vehicle sales to 231,000 units in February, a shift in consumer preference from diesel to petrol driven vehicles, and more and vehicular movement, aided by good weather.

Diesel consumption grew 7.4 per cent in February, the highest rate in over two years, and continuing the monthly growth trend that started in November. Here, too, dealers maintained low inventories in January due to the anticipated drop in retail price and topped up in February when crude prices started rising. Diesel prices were also hiked on February 16 and March.

Commercial vehicle sales also grew 10 per cent in February (as against an overall decline of 3.3 per cent in April-February period) thank to the rise in demand from the logistics and transportation sector, driving up demand for more diesel. Consumption of commercial non-subsidised LPG grew by 27 per cent in February, the second month of growth, largely because of implementation of the direct benefit transfer in LPG scheme and also the curb in the diversion of subsidised cylinders. However, for the 11 month period between April and February, non-subsidised consumption has registered a drop of 5 per cent.

Consumption of aviation turbine fuel (ATF) continued to decline for the fourth month in a row registering a marginal drop of 0.9 per cent in February and a cumulative growth of a mere 1.5 per cent in April-February 2015. The dismal growth is because airlines have optimised their operations and increased their passenger load factor following the reduction in number of flight by Spicejet.

Consumption of domestic natural gas declined by 12.6 per cent to 2,652 million standard cubic meter (mmscm) and a drop of 9 per cent to 34,800 mmscm in the April-February period on the back of continued reduction in domestic gas production. Gas consumption by the power sector declined 18 per cent to 585 mmscm due to low off-take by producers in UP, Rajasthan and Andhra Pradesh. Fertiliser sector’s consumption dipped 11.4 per cent in February.