News
Business
Movies
Sports
Cricket
Get Ahead
Money Tips
Shopping
Sign in  |  Create a Rediffmail account
Rediff.com  » Business » Superman or not, Raghuram Rajan has indeed made a difference

He endorsed transparency and financial stability in addition to issues related to inclusive growth and development, write Puran Singh and Nupur Pavan Bang.

"I am not a superman", he says, but the reaction of markets to his initiatives has been super indeed. He took over the office of RBI Governor amongst much hustle and media gush on September 4, 2013. Having predicted the financial crisis and carrying an image of an internationally recognised economist, Raghuram Rajan was seen as the savior for the Indian economy that had multiple economic issues to grapple with. 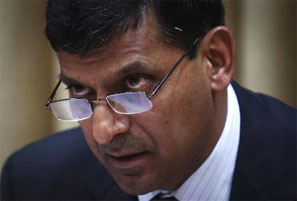 He had his guns ready and fired right away on the day he took over. He endorsed transparency and financial stability in addition to issues related to inclusive growth and development. A range of measures were announced that included elimination of license requirements for new bank branches, appointment of committee to assess RBI’s approach to financial inclusion, allowing rebooking of cancelled forward exchange contracts by exporters and importers, issue of cash settled ten year interest rate future contracts, interest rate futures on overnight interest rates, special concessional window for swapping FCNR (B) dollars, increase in foreign borrowing limit of banks to 100 per cent of unimpaired Tier I capital, etc.

These measures were well received by markets as the key economic indicators improved swiftly. Depreciating rupee that had been a cause of concern for some time, gained considerably from a low of Rs 68 per dollar on August 29 to stabilise at Rs 62 per dollar by September 16.

Sensex rode on investor expectations of favourable policies by the RBI and rallied by a maximum of 700 points, eventually crossing the psychological mark of 20,000 points. Forex reserves also remained stable during the time. Gold imports remained low at 7 tons in September helping India's current account deficit. Only thing that remained unleashed was inflation that rose to 6.46 per cent for the month of September 2013 (see Figure 1).

In order to arrest inflation, in his first monetary policy review on September 20, Rajan increased the interest rate to 7.5 per cent (by 25 basis points), against the common expectations. This might have irked Finance Minister P Chidambaram, but he remained quiet, while he had openly criticised Rajan's predecessor Subbarao for a similar move.

Rajan maintained that controlling inflation was important which eventually provided a growth environment pretty much in line with his predecessor’s line of thinking. He made up for the increase in interest rate to some extent by rolling back the rate on Marginal Standing Facility (MSF rate is the rate at which the RBI lends emergency funds to the banks) to 9.5 per cent from 10.25 per cent earlier (it helped reduce the cost of funds to banks and hence their lending rates).

In one of the measures, norms for Non-Resident Indian (NRI) deposits and overseas borrowings by banks were relaxed. This helped the foreign exchange reserves of the country. When Rajan took over, the reserves were at three year low of $274 billion. A month after, the reserves are up by $5.6 billion.

Figure 1: Key Financial Indicators before and after Raghuram Rajan’s taking over 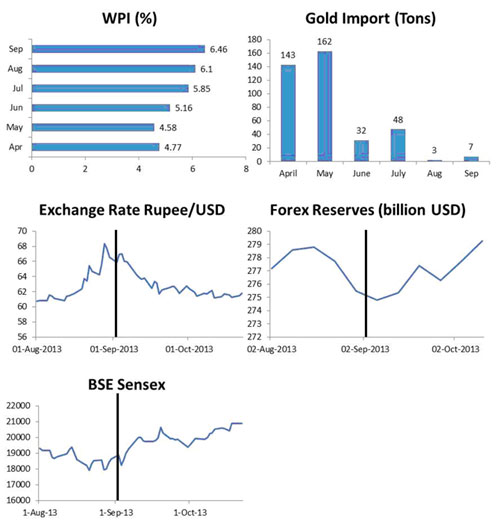 The month of September also saw gold imports go down that resulted in trade deficits to trim down to a 30 month low of $6.76 billion, resulting in a much lower second quarter (July-September 2013) deficit of $29.9 billion as against $50.3 billion in the first quarter (April-June 2013).

On October 3, Rajan met Chidambaram and decided to provide additional capital to banks for lending to auto and consumer durables sector. On October 7, RBI reduced the Marginal Standing Facility rate by another 50 basis points (now 9%) to bring down the cost of funds to the banks (RBI had increased the MSF rate from 8.25 per cent to 10.25 per cent in July 2013). Two reductions in MSF indicated that the rupee position of India was comfortable. According to Rajan, current account deficit of $70 billion was achievable at a stable rupee.

On October 10, RBI allowed banks to raise funds from international institutions until 30 November 2013 for general banking purposes (not for capital enhancement). On October 12, Rajan announced that major reforms in the form of allowing foreign banks to enter and takeover domestic banks were to be introduced in the coming months.

He promised near national treatment to the foreign banks subject to couple of operational conditions. In a meeting at IMF on the same day, he pointed that India must not be seen as a country in crisis as he did not see India running for IMF money in next five years and even beyond.

In a speech at Harvard University, Rajan stated that Indian economy was to pick up in fourth quarter of the financial year as government cleared stalled resource projects worth $115 billion. Also, good monsoon season was expected to boost agricultural production. He also pointed that economic troubles of India had to do with unwinding of stimulus during financial crisis and increased spending on things such as gold rather than any structural problems.

On October 21, Confederation of Indian Industries and Association of Chamber of Commerce and Industries urged Rajan to cut key policy rates for better liquidity conditions. However, the seven month high inflation figure of 6.46% for September does not go in their favor. Given Rajan's reputation, we may see another hike in interest rates on October 29 and given his ability to communicate to all stakeholders, the finance minister may not even be in a position to criticize his policies as it may not be received well by the markets.

In this short span of time, Raghuram Rajan has introduced/announced many initiatives, most of them yielding positive reactions from markets. Whether this is first aid or permanent solution, is too soon to tell.