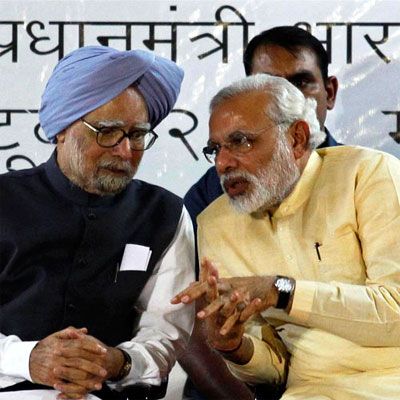 IndiaSpend finds out that there are great similarities between Prime Minister Narendra Modi's first year in office-which he completes on May 26-and the corresponding first year of former PM Manmohan Singh's last term.

There are great similarities between Prime Minister Narendra Modi’s first year in office - which he completes on May 26 - and the corresponding first year of former PM Manmohan Singh’s last term.

In seven of 12 indicators evaluated by IndiaSpend, the data reveal a similar trend - a reasonable economic performance after an economic downturn, as the chart below reveals: 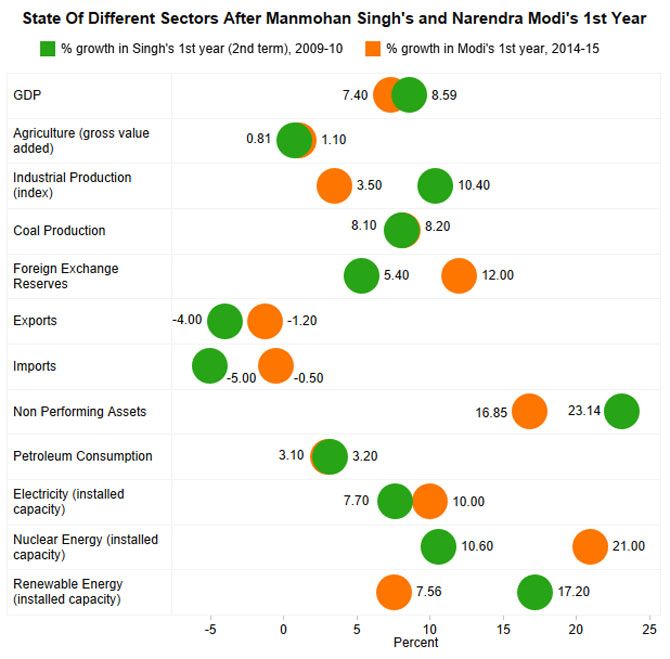 The large variations in the first-year period centre on:

Direct comparisons are difficult, considering that Singh was in his second term in office. Modi carries Singh’s economic legacy, which worsened considerably by the end of the term, attributed by observers to a global downturn and misgovernance.

But these indicators offer a broad statistical evaluation of the first years of Modi and Singh (during UPA2, as the second term of the United Progressive Alliance was called).

A journey through the numbers

Economic growth: Overall gross domestic product (GDP) growth in 2009-10, at constant prices, was reported to be 8.9 per cent. After a change in calculation and base year, GDP growth is estimated to be 7.4 per cent for 2014-15.

Agriculture: Agriculture, which employs about 600 million Indians, registered a growth of 1.1 per cent in 2014-15 compared to 0.8 per cent during 2009-10. The numbers indicate a long-standing—and worsening—crisis.

Coal: Coal from India’s mines increased 8.2 per cent in 2014-15, later falling into a controversy over botched allotments, one of the reasons for the decline in UPA2’s image. In 2009-10, production increased 8.1 per cent. Performance of the coal sector is expected to improve with the re-allotment of 67 coal blocks through an auction, although Modi’s figure of Rs 2-lakh crore ($31.25 billion) windfall is now contested.

Petroleum: In 2014-15, consumption of petroleum products (diesel, petrol, LPG etc.) increased 3.1 per cent, compared to 3.2 per cent during 2009-10. India’s demand for petroleum products is expected to grow 3.3 per cent next financial year, according to the oil ministry.

Renewable energy: With pressure on India to cut carbon emissions and a small base, renewable energy—it is responsible for 12 per cent of India’s total power installed—growth rates were high during both terms. The total installed capacity of renewable energy reported a 7.56 per cent growth in 2014-15 and a growth of 17.20 per cent in 2009-10.