The West Bengal government wants to replace hand-pulled rickshaws with battery-operated ones. But the rickshaw pullers are apprehensive that they will lose their livelihood 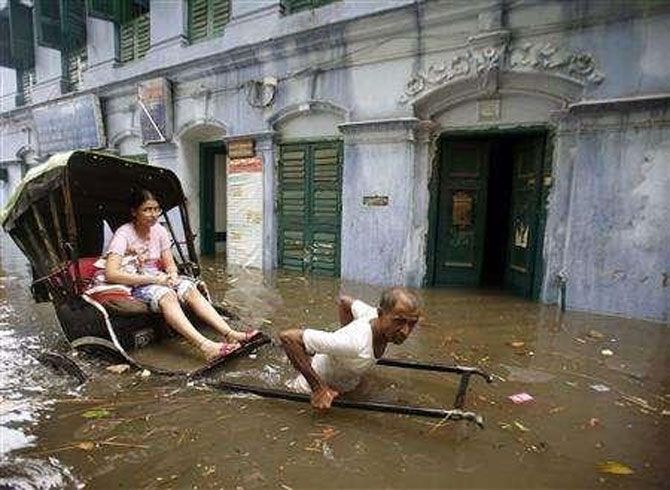 The presence of the hand-pulled rickshaw even today in Kolkata perhaps encapsulates the existential crisis that defines the city. It is a metropolis that still perpetuates its colonial legacy in its distinctive architecture, struggles to keep pace with the rest of the country and is marked by disruption and chaos. The rickshaw, therefore, is symbolic of the city striving to come to terms with the pressing concerns of a modern society.

Efforts have been on to give the metro's streets a more contemporary visual appeal since 2005. It was in that year that the erstwhile Left Front government decided to ban hand-pulled rickshaws, declaring the system to be a travesty of human dignity. Amid protests, the government paved the way for the death of the hand-pulled rickshaw by tabling the Calcutta Hackney-Carriage (Amendment) Bill, 2006 in the state legislative assembly.

However, what the then government had not thought necessary to ponder on while trying to usher in change was the need to provide an alternative source of livelihood to the impoverished rickshaw pullers. The Bill was challenged and the Calcutta High Court decreed a stay on the legislation. However, the Kolkata Municipality hasn't issued any fresh licences since 2005.

The current government has modified the ban: it has decided to replace the hand-pulled rickshaws with something more modern that would not tell on the dignity of the rickshaw puller. It was the Trinamool Congress, then the Opposition, that had vehemently vetoed the phase-out in 2006. In fact, its legislators had boycotted the Assembly sitting that discussed the amendment in the law. When the party won the Kolkata Municipality elections in 2010, the mayor, Sovan Chatterjee, announced the civic body would issue photo ID cards to the rickshaw pullers.

With municipal elections scheduled for this year and assembly elections in 2016, the government's decision to introduce a new variant of the rickshaw, clearly aimed at garnering popular support, may not yield high dividends when the Saradha scam has cast a permanent shadow on the credibility of the government. And how the new measure would affect the rickshaw pullers and their families is for time to tell.

It is not yet clear what will be the replacement. Muktar Ali, vice-president of the All Bengal Rickshaw Union, says that a two-seat, battery-operated carrier will be the probable replacement and hopes it will ensure better business. "Earlier the pullers earned Rs 100-150 per day on average," says Muktar Ali. "Now they may earn Rs 300 because the substitute would run faster. A new, faster model would mean more passengers per day."

Strangely, there isn't much cheer in the puller community. Mansoor Ali is a septuagenarian and has been plying the streets for almost 50 years after he came from Bihar and made a slum near Mullick Bazar his home. "Gaon mein log bolte thay, Calcutta bada seher hain, wahan kuch na kuch kaam mil jayega (People back home used to say that Calcutta was a big city where you could get some job or the other).

He did not have the money to buy his own rickshaw, so he rented one to earn a living. Isn't he relieved that he will no longer have the back-breaking task of pulling his customers through narrow lanes? "Do you think it is possible for a 70-year-old man at the end of his life to get trained to drive a battery-operated vehicle?" he counters, at once underlining the enormity of the task at hand for the government.

Hari Yadav, who has worked on Ripon Street and New Market for 30 years now, has his own anxieties. "Jinke pass licence hain, unko hi naya rickshaw milega. Humare pass to licence nahin hai (Only those who hold a valid licence will be given a new vehicle. I do not have a licence)," he says. Indeed, many who have migrated from cities in neighbouring Bangladesh do not have valid documents to prove their citizenship. Most of them will probably be rendered penniless. These unlicensed pullers are a big problem. However, Muktar Ali declares, "The rehabilitation programme will include both the licensed and unlicensed rickshaw pullers. Our information is that 20-25 per cent of the rickshaw pullers do not hold licences."

Kolkata's emblematic two-wheeled contraption has been a long-standing symbol of oppression and has often been used to depict wretchedness, as in Bimal Roy's Do Bigha Zameen, a film that dealt with the disturbing state of poverty in new, independent India. The 1992 Om Puri starrer, City Of Joy, too recalled the travails of a rickshaw puller's life. But despite the negative portrayal in films and literature, even as the city has changed its skyline, the rickshaw has continued to trundle along the lanes.

"There were about 6,000 hand-pulled rickshaws in Kolkata," says Alapan Bandoyopadhyay, principal secretary in the transport department. "At last count, we found around 2,000 still plying on the streets." He says that the government has recently held talks with representatives of the rickshaw pullers' union and has sought a detailed report on the individuals who would benefit from the government's new scheme.

"In the recently concluded Bengal Global Business Summit, we held discussions with a company named Kinetic on new rickshaw models, and it looks interested. It has asked us to suggest viable models. We are looking at interesting ones," he says.

Though the rickshaws have symbolised the worst in human oppression, the pullers insist that people have always considered them the preferred mode of conveyance, especially during emergencies and for the older people. In streets that are perennially crammed with heavy traffic, these contraptions prove a godsend during medical emergencies. "Yesterday, I ferried an 80-year-old woman who was running very high fever to her daughter's residence," says Yadav.

There's also the infamous chaos of Kolkata streets during the rainy season. With most of the arterial roads in knee-deep water, even people opposed to this outdated mode of travel are forced to rely on them when cars are unable to cope with the deluge.

With the government's proposal to phase out the manual rickshaw, a part of the city's history, rather a part of its colonial vestige, will be deleted forever. Yet for a city that is desperately trying to grab on to the idea of a better, new world, it would have to take human development into account. However, while there is no denying the inhuman nature of a rickshaw puller's job, the men need to be assured of a livelihood once their current means is denied to them. And that is the challenge for Mamata Banerjee's government.