In India, it's a rural wageless job scheme

If a worker has put in 15 days work, he gets paid for 10 days and he keeps waiting for the balance. But on paper, he worked only for 10 days and hence, there is no balance on official records, writes Sreelatha Menon.

If our salaries were delayed by two years, two months or even two weeks, how many of us would like it or put up with it?

In Araria district in Bihar, workers under the Mahatma Gandhi National Rural Employment Guarantee Scheme (MGNREGS) complain of not receiving wages for the work done in December 2011. 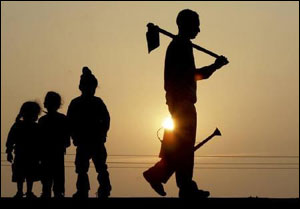 Says Anil Kumar Paswan of Parihari village in Raniganj block, “We are still waiting for wages for the work that we did in 2011. The village pradhan pays at his whim.” Similarly, the gram panchayat of Nivatiya in Pisawa block of Sitapur in Uttar Pradesh owes Rs 8 lakh in wages to workers for work done around four to five months ago. According to Richa Singh, founder of Sanghatin, which works for MGNREGS workers,  at least 50 per cent workers in Sitapur district get wages within three months. But that comes only after we protest and demonstrate.

But not that the rural job scheme was designed to deceive poor villagers. There is a provision in the Mahatma Gandhi National Rural Employment Guarantee Act (MGNREGA) to compensate workers for any delay. A minimum of Rs 2,000 has to be paid per worker, and the amount increases with time.

Now, to activate this clause, the state governments needed to notify the appointment of assistant labour commissioners (ALCs) in every district to sort out MGNREGA delay issues under the Payment of Wages Act.

Three years ago, Ashish Ranjan of the Jan Jagran Shakti Sangathan (JJSS), which works for MGNREGA workers in Araria, found that Bihar, and in fact, most other states have not notified this section and hence, ALCs would not accept any application for a compensation for delay under MGNREGA. Similarly, Sanghatin in Sitapur district struggled hard to get compensations for delayed wages (since 2011) of 1,000 workers in Pisawa block, only to realise last year that the Uttar Pradesh government has also not notified that ALCs should resolve MGNREGA wage delays under the Payment of Wages Act.

The Bihar government has, subsequently, notified. But the road to compensating delays is strewn with delays, as people in Araria found out.

When JJSS went to submit applications on behalf of workers in Araria, it found that there was no ALC available. So, they went to Katihar district and found that the ALC had not completed two years and hence, he was not eligible to take up these applications.

So, Araria workers are now waiting for the ALC to complete two years, or an eligible ALC to come to the village. In Sitapur and the rest of Uttar Pradesh, the people wait for the notification.

Ranjan says a study done recently on 65,000 MGNREGA muster rolls in Araria found that the time taken to close a muster roll is 75 days. Closure is when the measurement of work is done and payment slips issued.

A committee under Jean Dreze, formed by the Central Employment Guarantee Council (EGC) three years ago, had suggested that since it was illegal to make people work without wages, or to delay wages, provisions should be made to pay at least a part of wages in advance. The rural development ministry, subsequently, virtually wound up EGC, a statutory body, and discarded the advice given by Dreze, too.

According to Kamayani Swami, one of the founders of JJSS, the delay in wages in Bihar are of two types: either the entire wage is delayed, or the work days of workers are reduced in number on paper.

That, she says, could be one of the possibilities for the delay in wages of villagers in Parihari, who are waiting for wages for work done in December 2011.

JJSS filed 5,000 job applications on behalf of workers in Araria this financial year. The village generated 1.7 million work days this year. In Araria and Raniganj blocks where JJSS works, close to 300,000 work days each were generated, indicating that applications got responses. What remains to be seen is whether these workers would have to wait long for their wages. 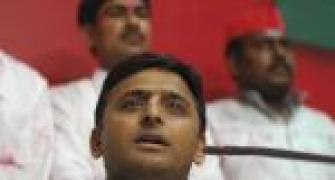 Rahul asks UP MPs to gear up for next LS polls

'SP support to UPA will continue, final call by Mulayam'