The 1995 judgment in the Union of India vs Cricket Association of Bengal case emphasised that free speech is essential for a successful democracy and citizens must have a plurality of views and a range of opinions on all public issues, says M J Antony. 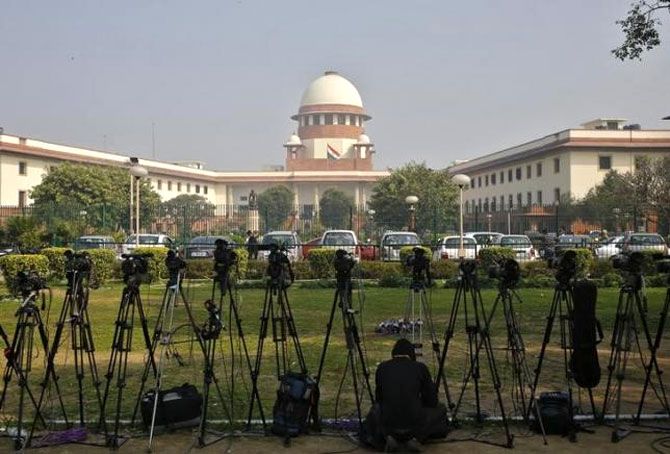 Judgments of the Supreme Court over a decade-and-a-half have proved that they can dent the government.

Some compelling instances in recent years are the decisions in the 2G spectrum scam and the coal scam. In the spectrum scam, the court cancelled 122 licences of various telecom companies ruling that the allotments were unconstitutional and arbitrary. In the Coalgate scam, the court, cancelled 214 allotments of coal blocks and asked the government to auction them. The Karnataka mining scam led to cancellation of iron ore mining leases and re-auction, with the court regretting the "systematic plunder of natural resources by a handful of opportunists."

These decisions contributed to tectonic changes in politics. The court struck a new path by monitoring the investigations and calling for status reports. The reverberations are still heard in the court, which continues to hear related applications.

Another landmark judgment, which embarrassed the government, was Vodafone International Holdings vs Union of India (2012), in which the apex court reversed the decision of the Bombay High Court and held that Indian tax authorities did not have territorial jurisdiction to tax the offshore transaction. The issue simmered for a long time and the government had to take policy decisions to wriggle out of the international imbroglio.

The 2013 judgment in Novartis vs Union of India raised a global debate related to patents for life-saving medicines. The court, while balancing public good and monopolistic pricing, upheld the rejection of the patent application of the Swiss major for cancer medicine, Gleevec, stating that there was no innovation. This was a boost for Indian pharma companies, which wanted to produce cheaper generic versions of essential drugs.

The court eased the pangs of banks and financial institutions racked by non-performing assets giving a liberal interpretation to the Securitisation Act in its 2004 judgment, Mardia Chemicals vs ICICI Bank. It enabled speedier recovery while balancing the rights of the borrowers.

Despite the passage of the Arbitration and Conciliation Act 1996 and recent amending ordinance, the law spawns undesirable litigation locking up payments for several years. The law applicable in international arbitration is a frequent cause of discord.

The Supreme Court, in 2002, decided in the case of Bhatia International v Bulk Trading that Indian courts had exclusive jurisdiction to test the validity of an arbitral award made in India even if the law of the contract is that of another country. In 2005, a constitution bench overruled that view and stated in the case, Bharat Aluminium vs Kaiser Aluminium, that in an international arbitration conducted abroad, the parties could not move Indian courts for any reliefs.

The Supreme Court's declaration that airwaves are a public property and it could be controlled by a public authority had wide implications on the electronic media and freedom of speech. The 1995 judgment in Union of India vs Cricket Association of Bengal emphasised that free speech is essential for a successful democracy and citizens must have a plurality of views and a range of opinions on all public issues.

The unfair implementation the land acquisition law has invited severe criticism from the court. Decades of disputes over the amount of compensation, non-utilisation of "urgently" acquired land for a long time and political interference have stalled infrastructure projects. One of the recurring questions is 'public purpose', a fuzzy term. The court laid down certain principles in the 2006 judgment Daulat Singh vs First Land Collector.

The problem of resettlement of those ousted for big projects and dams was discussed in the Narmada Bachao Andolan judgment.

The court stated that construction of a dam per se does not violate fundamental rights, but the tribals must be rehabilitated at a new location where they are better off than they were before. A grievance committee was constituted. However, what really happens in such social justice verdicts is that there is little follow-up and vexed questions mostly vanish into the smog of time.