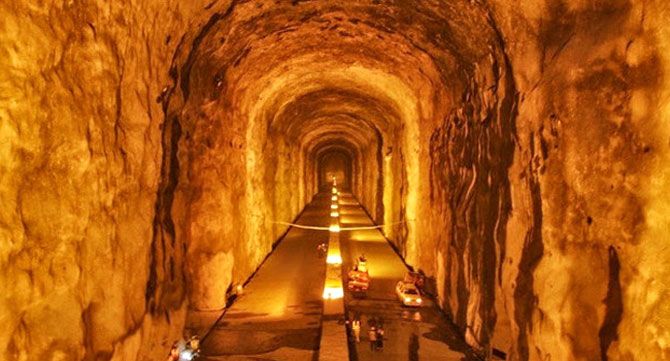 Image: A natural underground rock cavern has been reshaped near the port of Vishakhapatnam on India’s eastern coast, a part of the underground storage facilities being constructed to store emergency oil reserves. Photograph, courtesy: Indian Strategic Petroleum Reserves Ltd.

Two giant, rock-cut caverns will soon be pumped full of crude oil in the eastern port of Vishakhapatnam, part of a set of new underground facilities that will hold India’s emergency oil reserves.

Taking advantage of weak global crude prices, down about 42.5 per cent since July 2014, the government is spending about Rs 4,948 crore ($800 million) to shore up what are called strategic oil reserves, which can be used in emergencies, if crude imports are disrupted.

The new storage facilities, approved on January 2006, include:

Apart from the natural caverns, concrete tanks are being built at Vishakhapatnam port. Both underground facilities can together hold 1.33 metric tonnes (MMT) of crude—the equivalent of 1,29,221 truck-tanker loads.

Money left over after filling the Vishakhapatnam storage will be used to buy more crude to fill two more facilities at Mangalore and Padur, both in Karnataka on India’s western coast. Image: A series of pipes running from the surface (above) descend into the underground rock caverns (below). Crude oil will be pumped into the caverns through these pipes. Photograph, courtesy: Indian Strategic Petroleum Reserves Ltd. Put together, the three facilities - managed by the Indian Strategic Petroleum Reserves Ltd - can hold 5.33 MMT of crude oil, the equivalent of 5,17,857 truck-tanker loads (of 12 kilolitre capacity each).

The strategic reserves would hold enough crude oil to power India for about 13 days, based on current net oil imports, according to data tabled in Rajya Sabha.

Over five years, India has imported more than 80 per cent of its crude-oil requirement.

India will require additional crude-oil storage of approximately 13.32 MMT by 2019-20, according to rough estimates, based on existing storage with oil companies and the new facilities being built by ISPRL.

Therefore, the Indian government is planning to build four more facilities for strategic crude reserves at Chandikhol (Orissa), Bikaner, Rajkot and Padur, with a combined storage capacity of 12.5 MMT of crude oil, according to ISPRL data. 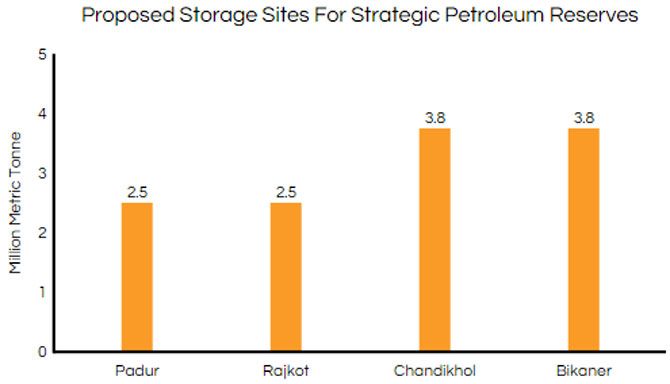 India makes a start, others ahead

The global standard for strategic oil reserves, as set by International Energy Association (IEA) for member-countries, is 90 days of net oil imports.

USA holds 95 MMT of strategic reserves, the highest by any country in the world.

Japan, which like India is dependent on imported oil, has the second highest reserves with 44 MMT  (These reserves exclude commercial storage of crude oil). China, like India, is in the process of shoring up its strategic oil reserves. As of November 2014, it had acquired 12.4 MMT.