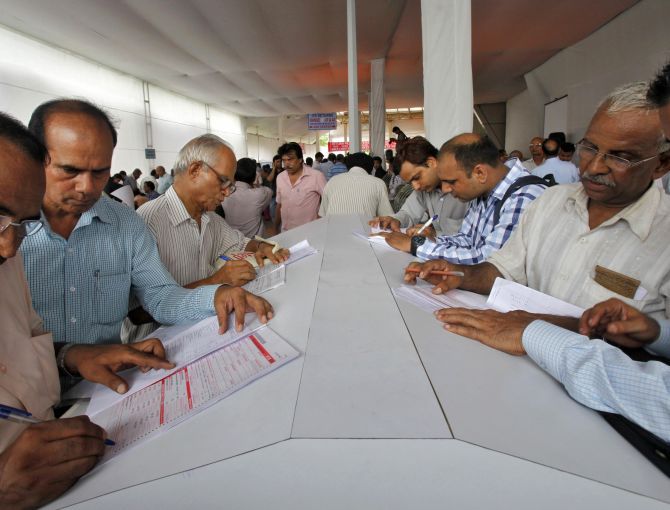 IMAGE: Tax-payers fill up forms before submitting their income tax returns in New Delhi in this photograph from July 31, 2013. Photograph: Anindito Mukherjee/Reuters

While these changes were part of the Union Budget 2018-2019 tabled by then finance minister Arun Jaitley on February 1, 2018, tax experts are baffled that it took the income tax department so long to incorporate these changes in the ITR 2 and ITR 3 forms.

'We are heading for a disaster in income tax return filing this time,' tweeted Nikhil Vadia, a chartered accountant from Mumbai-based N N Vadia & Co.

"Arun Jaitleyji had made these changes in Union Budget 2018-2019, but the income tax department did not make these changes till now," Vadia says over the phone.

"When various registered associations of CAs raised objections that tax returns could not be filed unless changes made in the law are incorporated in the ITR forms, the IT department started making the changes," he adds.

Vadia believes software providers will need at least three weeks more to code and test their products after incorporating these changes.

"This is already leading to chaos. Practising chartered accountants will tell you that the changes required as per the ITR 2 and 3 forms are almost impossible to furnish in such a short time," he adds.

The revised ITR 2 and 3 forms will make life chaotic for taxpayers because one needs to input data like the ISIN number of shares sold, and on which shares capital gains have been made during the last financial year, or if you are a director in a company, if you hold unlisted shares, etc.

Vadia cites two examples to explain how difficult it will be for taxpayers to come up with details required in the forms: "They are asking for the PAN number of an unlisted company whose shares an individual owns. They are also asking for ISIN number of shares sold. Most people would not be aware of what an ISIN number is and where and how to get it to file their ITR."

"ISIN number is allotted by your depository and one has to go to their demat account to find it. They are asking for ISIN number for the mutual fund units you have sold," Vadia says.

ITR 2 forms are filed by taxpayers whose income exceeds Rs 50 lakh, or own more than one property, or have made capital gains, or hold directorship or unlisted shares of a company.

Those earning an income from business or profession (like doctors, chartered accountants, etc), or partnership in a firm, or whose presumptive income is more than Rs 50 lakh, file returns using the ITR 3 form.

Indian residents earning a salary income, or having one house or property, use the ITR 1 to file their tax returns.

Chirag Chauhan, another practising CA and a member of the Institute of Chartered Accountants of India, believes the last-minute changes made on July 11 will make it cumbersome and tedious for taxpayers to cope with the pressure this additional paperwork will bring.

"A lot of our clients are facing problems because of the changes made at the last minute," he says.

"How will these taxpayers file their returns with all the necessary changes that the new ITR 2 and 3 demand by July 31? That is going to be a big issue," Chauhan adds.

Earlier, the IT department had extended the deadline for companies to file their last quarter TDS returns from May 31 to June 30. Employers were supposed to issue Form 16 by July 10, and most are giving out their Form 16 now (July 16).

About the delay in changes made to the ITR 2 and 3 forms on July 11, Vadia recalls a Delhi high court directive (external link) to the Central Board of Direct Taxes (CBDT) in 2015, that the ITR forms should be made available on or before April 1 (the beginning of a financial year) and after that no changes should be made to it.

"They have to ensure that the forms are available on time. Or, they must give an extension of two-three months to the taxpayers," Vadia says.

Expertmile.com, a platform that connects tax, finance, legal and secretarial professionals, has launched an online petition (external link) to extend the ITR filing deadline to August 31, 2019.

Talking about such extensions, tax expert and founder of RelaxWithTax.com, Mahesh Padmanabhan, says, "They come with an extension date only towards the end of the timeline so one cannot really predict (what will happen)."

While Padmanabhan rues that with the ITR 2 taxpayers will have to fill the data on their own by acquiring it from various sources, he also observes that ITR 2 filing has been made simpler in terms of the transactions related to capital gains on sale of shares and mutual funds.

"Now one can fill in a summary figure (a net figure) instead of filling details of gains made on each and every transaction. Just fill in the net capital gains made; no need to give the segregation," he says.

"There is no problem per se, but taxpayers have to collate a lot of data and incorporate that in their ITR forms," says Padmanabhan.

Chauhan presents the real problem that those filing ITR 2 and 3 will have to grapple with.

And going by last year's figure of 35 million taxpayers who filed their returns using ITR 2 and 3 forms, Chauhan pegs their number at 40 million this year.

"For 4 crore people to file their tax returns in about 15 days makes it a huge task."