West Bengal's longest serving chief minister Jyoti Basu once told an industrialist that capitalists were class enemies and he should expect no sympathy.
Ishita Ayan Dutt tracks the political excesses behind the state's downfall. IMAGE: Starting in the 1960s, labour disputes and lock-outs in many companies lasted more than a year, marking their decline. Photograph: Keystone/Getty Images

It is the late 1960s. Urban Bengal has taken to the Naxal movement and parts of Calcutta (as Kolkata was called then) are marked by its liberated zones.

Siddhartha, a medical school dropout, desperately needs a job after the brutal death of his father and is out to try his luck.

During one such endeavour, Siddhartha faces an interview panel of Indian sahibs. It seems to be going rather well till one of them asks, what is the most outstanding and significant event of the last decade.

The war in Vietnam, he replies. A standard response would have been, man landing on moon, but Siddhartha betrays the stereotype.

Half-disappointed and apprehensive, the interviewer immediately asks if he is a Communist.

Siddhartha defends himself: What was remarkable about the war was the plain human courage, as opposed to a technological advancement like man landing on moon that was predictable and inevitable.

He doesn't get the job.

The scene is from Satyajit Ray's Pratidwandi. Based on a novel by Sunil Gangopadhyay, it tells the story of an educated middle class youth caught in the political whirlwind of the time.

While it's easy to empathise with Siddhartha, played by the dashing Dhritiman Chaterji, the interviewer can't be entirely faulted for rejecting a 'potential' Communist.

It was a time when 'Amar naam, tomar naam Vietnam' was resonating through Kolkata and Bengal, and 'Amar bari, tomar bari, Naxalbari' became an adjunct to it.

In Kolkata, it was a time when the European side of the business was shrinking and the indigenous (Marwari, to be specific) were rising.

But the colonial lifestyle was still alive in the Bengal Club, the Great Eastern Hotel and the famous Firpo's, the frequent haunts of the burra sahibs.

The lunch at Firpo's -- steak and kidney pudding, roast lamb, roast saddle of mutton, pressed beef -- was as legendary as the cabaret.

Eventually, the political turmoil caught up; as patrons from the corporate world emptied out of the city, and the Anglo-Indian community started emigrating, business dried up for Firpo's.

In 1977, the Left Front government allowed it to convert into a market.

It was January 12, 1968, remembers the executive vice-chairman of a Kolkata-based engineering company. "I was a greenhorn, trying to bring about some discipline in the factory to save it from liquidation."

One day, as he was returning home from the factory, his car was bombed. The boys had hurled the bomb from a distance, their faces covered. The driver was seriously injured.

Blood was oozing from the executive's ears and head. One of his eardrums had burst and the splinters from the windscreen had penetrated his skull.

"I was not killed because they thought me to be dead."

Were the attackers Naxals?

"There was a thin line between the Naxals and the Communist Party of India-Marxist). The dominant union in our factory then was affiliated to the CPI-M," he says.

The factory was closed for the next several months.

Neelkanth Ratnakar Dongre, a young and upcoming executive of Jay Engineering Works, was surrounded in the factory by workers who were out to cause mayhem: The stocky executive loaded all the important papers in a truck, smashed it through a wall and drove it non-stop till he reached Delhi where its owner, Lala Charat Ram, lived.

Impressed by his loyalty, Charat Ram would one day make Dongre his partner in business.

As the attacks intensified, recalls industrialist S K Birla, "many responsible owners gave up on business and transferred ownership."

"There was no security. Every flight that we took out of Kolkata, we carried a bagful of belongings, including jewellery. It was the worst of times," another industrialist recalls. 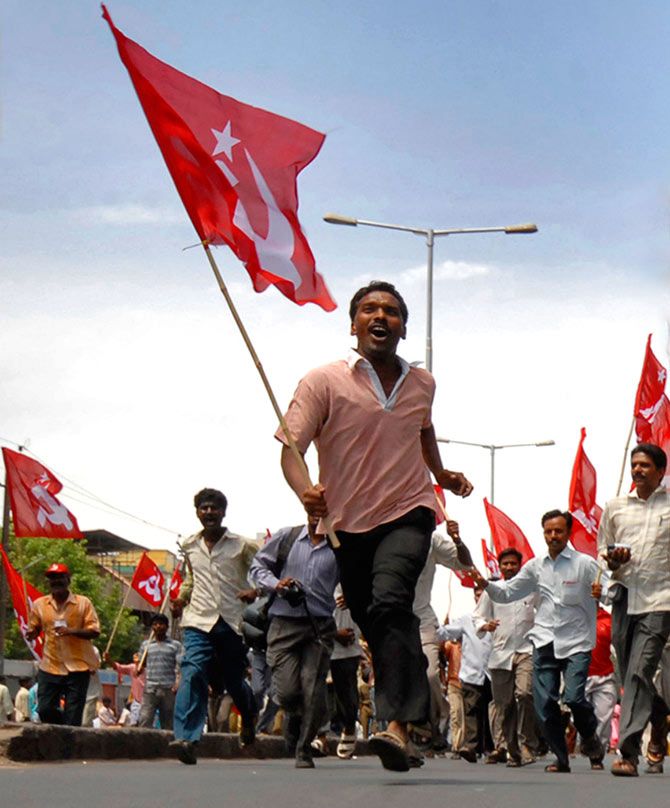 IMAGE: A CPI-M-led strike. Though the United Front government tried to control the Naxal movement, it steered clear of meddling in labour disputes. Strikes became as much a symbol of West Bengal as its iconic trams. Photograph: Krishnendu Halder/Reuters

It was also the time when Bengal's engineering industry, which was heavily dependent on the Railways, was badly hit as orders were cut down.

Workers were paid only minimum wages.

This was followed by labour disputes and lock-outs in many of the companies that lasted more than a year, marking their decline.

"That the Railways slashed their budgets was the secondary issue; the real reason was the complete breakdown of law and order," the executive vice-chairman quoted earlier says.

Lakshmipat Singhania had moved from Kanpur to Kolkata in 1942. He set up Aluminium Corporation of India near Asansol, which was India's first aluminium producer.

One day, the works manager of Aluminium Corporation of India was thrashed by the workers for more than two hours.

The Singhanias met then chief minister Ajoy Mukherjee and then deputy chief minister Jyoti Basu, who were aware of the entire episode, but pinned the blame on the works manager -- he had attacked the workers, they insisted.

The workers switched off the power supply to the aluminium smelters and the plant was closed for a few months.

In 1974, Aluminium Corporation was nationalised.

Four years earlier, sometime in 1970, Singhania had advised his eldest son, Hari Shankar, to relocate to Delhi and start afresh.

The Singhanias were not the only ones to move out.

Around 1978, Basant Kumar Birla's son, Aditya Vikram, relocated to Mumbai to grow his empire there.

The exodus coincided with Bengal losing its natural advantage when the Centre's freight equalisation scheme allowed coal to be carried at equivalent prices across the country.

With the economic decline, the problem of unemployment only increased, which added fuel to fire.

And though the United Front government tried to control the Naxal movement, it steered clear of meddling in labour disputes, in keeping with its electoral promise.

Another promise was to reorganise the police force so as not to interfere in 'democratic movements', another name for labour disputes.

So, after taking charge in 1967, the UF issued a circular that the police would not be able to interfere in 'gheraos' unless it had the permission of the labour ministry.

Though the order was struck down by the Calcutta high court, the state government modified it and drew a distinction between 'legitimate' and 'unlawful' actions.

There was nothing to hold back the militant unions. But what is lawful need not necessarily be legitimate.

Birla narrates an incident what might have passed as legitimate.

In 1970, Birla Building, the 16-storey building on R N Mukherjee Road, where most Birla companies were to be headquartered, had just been built. Till then, these companies used to operate out of India Exchange Place.

Though the building was ready, the Birlas could move in only after two years.

"The CPI-M wanted one umbrella union for all Birla companies. But different companies had different set of shareholders and board of directors. So, we told them, let each company select a union. But they didn't agree," Birla recalls.

So, the Birlas decided to close down the offices and the babus started operating out of home.

At that time, across the various Birla offices, there were about 1,000 employees in the offices.

"The first two weeks we were not even allowed to move out our papers from India Exchange Place. Once the state came under President's Rule [in 1972], we managed to accomplish that with police security. We rented 32 flats in Kolkata and for two years we functioned out of these flats. It was only after Siddhartha Shankar Ray came that we could move into Birla Building. The union had disintegrated," Birla says.

The metal signage at Birla Building that reads 'Occupied since 1972' bears testimony to it.

If the UF government was famous for its failure to curb the Naxalite movement, the Siddhartha Shankar Ray government's biggest achievement was in crushing it.

And that is where it ended, an industrialist points out: "There was nothing to stop the outflow of capital from Bengal."

For business, the situation worsened when the Communists returned to power in 1977.

A story goes that an industrialist, on the verge of bankruptcy, went to meet then chief minister Jyoti Basu at Writers' Building, the state secretariat, to seek help for his problems: labour disputes and power cuts.

Basu explained to him matter-of-factly that capitalists were class enemies, and he should expect no sympathy.

"There were two kinds of Communism. One was dictatorial like Russia and China where economic development was possible. But in India, in a democracy, where the Left had to win elections every five years, they first worked on rural Bengal by implementing land reforms and the Panchayati Raj and then decided to go with the popular pro-labour sentiment that reaped dividends for many years," says Dipankar Dasgupta, former economist with the Indian Statistical Institute.

Also, a confrontational attitude with the Centre saw a dramatic drop in licences for West Bengal. 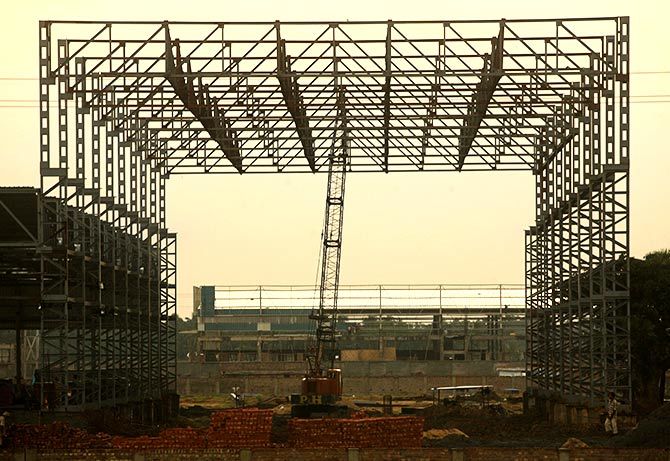 A long list of companies, from tea major Brooke Bond India to ICI India, Shaw Wallace, Bata and electronics giant Philips India, which incidentally was born in Kolkata, had left for greener pastures.

"The business environment was not conducive and Maharashtra offered better opportunities. Also, we didn't have any manufacturing facility, though we were in Odisha," says Vinod Mittal, younger son of M L Mittal, the erstwhile promoter of the company.

But why set up a facility in Odisha and not in Bengal? Was it for the mines? "No, we didn't have any mine then. Actually, states come forward with opportunities to industrialists and Bengal didn't. The thought of putting up the facility in Bengal never crossed our mind," he says.

While companies were leaving Kolkata in droves, agricultural productivity was falling.

The first few years of Communist rule had seen a dramatic growth in grain production.

Basu realised that the only way he could stay in office was to create jobs through industrialisation and came out with the Industrial Policy of 1994. But it had limited success: investments till he gave up office in 2000 stood at a meager Rs 17,000 crore.

His successor, Buddhadeb Bhattacharjee, knew he was racing against time.

His one-point agenda was to attract big ticket investments.

And he did manage to do that: Tata Motors, Wipro, JSW and the Salim group of Indonesia.

"But he was fighting a lone battle against his party," an industrialist points out.

To insulate the information technology sector from gheraos, which he admitted was his party's contribution to the lexicon, he declared it a 'public utility service'.

But the battle for land rights in Singur led to his ouster in Bengal.

It also ended Bengal's dream of regaining its past glory. 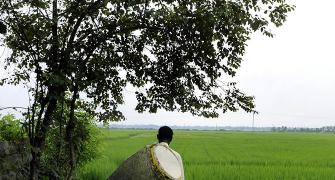 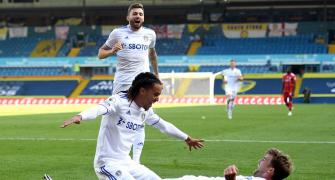