In an unprecedented move, the global rating agency Standard & Poor downgraded the US government’s “AAA” sovereign credit rating to “AA+” while keeping the outlook negative. That was in August 2011.

That in turn triggered massive convulsions in financial markets across countries, including India. And pray why not? After all, the US government securities is the mother of all benchmarks for global financial markets.

Our government’s reaction to this was on predictable lines. Remember the propensity of the Indian establishment to commit sati for any negative development in US. Terming the situation as “grave” the then finance minister Pranab Mukherjee commented: “There are difficulties and some sort of a crisis. But there is no need to press the panic button.”

Crucially he added: “I do not want to worry unnecessarily. Our growth story is intact and our fundamentals are strong.”

Are all these empty rhetoric? Or do these reflect undebated aspects of the Indian economy? If the fundamentals of our economy are indeed strong why then express concern in the first place? Why national consternation when the stock markets gyrate on such negative developments?

The answer to this paradox is not far to seek. It may be interesting to note that liberalisation of the Indian economy since the early 1990’s has not liberalised the purse of an average Indian. In fact, if the average national saving rate is any indication, India has achieved a higher savings rate post liberalisation than during the pre-liberalisation era.

It is in this connection that the Report of the “High Level Committee on Estimation of Saving and Investment” set up by the Ministry of Statistics and Program Implementation under the chairmanship of Dr C Rangarajan concludes: “More than 98.0 per cent of investment is funded by domestic savings. As a result, the savings-investment gap has remained relatively in a narrow range reflective of modest reliance on foreign savings.”

No wonder, it is this domestic savings that goes on to provide the necessary confidence to successive FMs, whenever confronted with a “global” economic crisis. But why then express concern?

It may be interesting for a reader to note that approximately three-fourths of this gargantuan saving comes from Indian households – i.e. ordinary Indian like you and me. Needless to say that the balance one-fourth of our national savings comes from the private corporate sector and public sector put together.

Yet not many within the establishment cognise, much less recognise, the fundamental role of savings in the economic development of the nation and that too savings that arise from our household.

Importantly, what is forgotten in the melee is that contrary to popular belief Indians have paradoxically begun to save more post liberalisation than before. A liberalised economy and a conservative Indian? Has liberalisation offered more avenues to save than spend to an Indian? Or is the entire liberalisation program failing and hence causing convulsions in our saving pattern?

Answer to these questions is not far to seek. Alan Greenspan, the former US Federal Reserve Chairman, in his celebrated book Age of Turbulence observes that savings is a sign of underdevelopment and insecurity. He concludes that a developed financial market and improved governance obliterates the necessity for domestic savings, especially by households.

Does that imply the obvious? Is there a message for the incumbent FM? Is an average Indian chary of liberalisation process? Has liberalisation failed to deliver?

There is entirely yet another dimension to this issue. A huge domestic yet fragmented saving pattern offers a perfect hunting spot for the insatiable appetite for [cheap] funds for our governments and avaricious corporates. 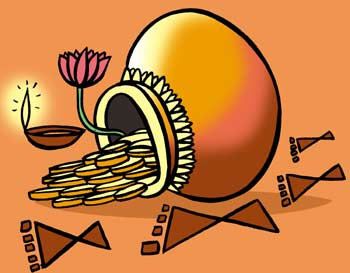 In the process, the correlation between benign interest rates and elevated inflation is forgotten. Naturally, this disconnect between the two represents a challenge to our household that is on a compulsive savings mode.

Savings in physical form includes mostly investment in houses and land. Interestingly in macro-economic computations, gold is excluded from savings and included along with consumption. And should gold be included as part of domestic savings our domestic household savings will naturally increase, albeit in physical form.

But what happens to our bank deposits? Readers may be aware that our governments (both state and central) run huge deficits. As per RBI, their combined deficit works out to 6.8 per cent for 2013-14. Simply put, we deposit money into our banks who in turn lend to our Governments at ridiculously low rate. Therefore, it is the prudence of the ordinary Indian that to a substantial level funds deficits – read recklessness – of our governments.

In the process, there is virtually not much lending left for businesses. And whatever is left, thanks to its size and persuasive powers, large corporates have bulldozed themselves into having the first right (again at lower interest rates) leaving small and medium enterprises starved of funds.

And this is at the root of our economic problems and substantially if not wholly explains our demand for foreign funds.

What adds to the consternation of the Indian economy is that as interest rates are lowered, the smart Indian saver leans more towards physical savings, including gold. Savings in gold has two major implications: One, it is a no-confidence in Indian economy and two, it adds to our current account deficits and therefore leaves an already vulnerable balance of payment position, more vulnerable.

In short, it is an unenviable situation for the FM. Domestically we save significantly, but not in financial form. The financial intermediation or the process of converting physical savings into financial savings is either too weak or absent.

As corporates seek lower interest rates and in the process hope more money will pour into stock markets or boost current sales, they are plainly wrong. Given their unimpressive track record at a collective level, it is not too soon to believe that Indians will invest into stock markers. Likewise in the absence of social security Indians will continue to save. And in the absence of financial intermediation savings will be only in physical form.

In short, savings, investment and intermediation between the two present a complex conundrum for our FM. Will Budget 2015 provide answers to these questions?