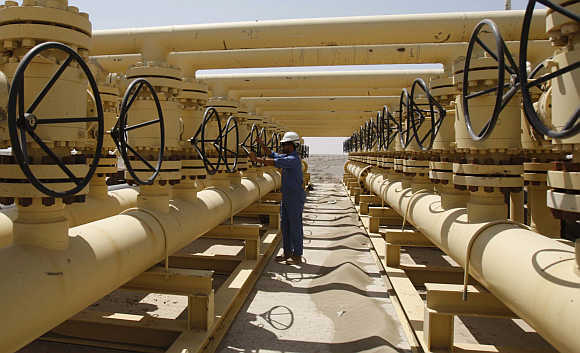 When the model code of conduct came in the way of an increase in the price of natural gas, another episode was added to the list of the United Progressive Alliance's policy flops in the hydrocarbon sector in the last 10 years.

The first seven years of the United Progressive Alliance term saw movement on gas pricing crawling because of the compulsions of coalition politics but the steps initiated in the later part of the Congress-led regime were either half-hearted or had to be rolled back.

The game changer could have been cash transfers of the cooking gas subsidy. 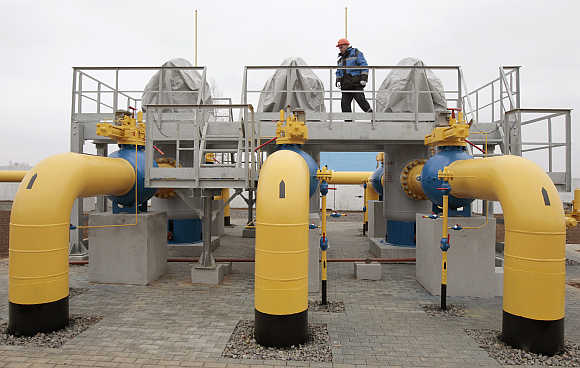 Image: In automobile fuels, after waiting for almost six years, petrol prices were decontrolled by the government in June 2010.
Photographs: Vasily Fedosenko/Reuters

The aim was to plug diversion in supply and help the subsidy reach its intended beneficiaries.

The plan was to pay the subsidy into bank accounts of customers who would buy cooking gas at market prices.

However, after reaching out to 291 districts in 18 states, the scheme was put on hold in January.

The major hindrances cited by the government were not having enough unique identity numbers under Aadhaar and linked bank accounts. 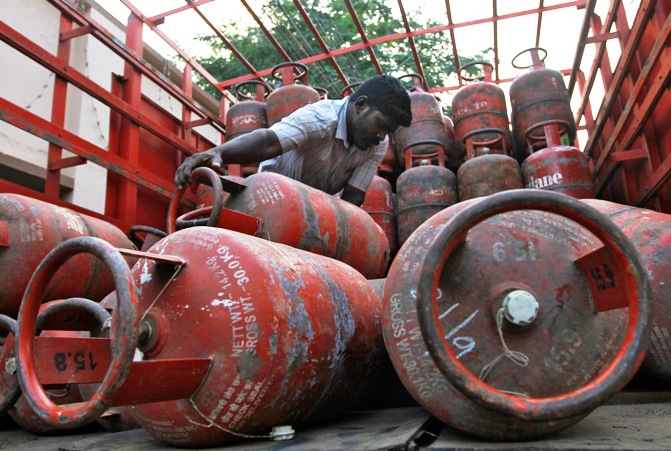 Image: The initial cap was six cylinders per household in a year but political pressure compelled the government to raise it to nine.
Photographs: Reuters

By the end of January, 17 million consumers had received Rs 3,000 crore (Rs 30 billion) in their bank accounts.

The government's plan was to save Rs 12,000 crore (Rs 120 billion) in subsidy payouts through the scheme.

Another initiative was the cap on the number of subsidised cooking gas cylinders.

The initial cap was six cylinders per household in a year but political pressure compelled the government to raise it to nine.

This was further increased to 12, covering 98 per cent of consumers, with a Rs 5,000 crore (Rs 50 billion) rise in the subsidy burden.

In automobile fuels, after waiting for almost six years, petrol prices were decontrolled by the government in June 2010. 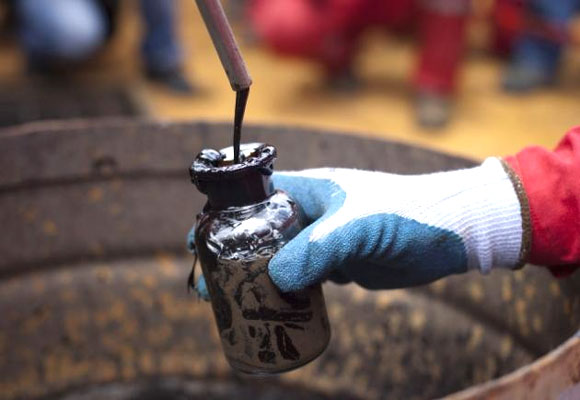 The Left parties during UPA I and the Mamata Banerjee-led Trinamool Congress during United Progressive Alliance II kept resisting the move within the ruling alliance.

The Left-supported United Front alliance in 1997 first decided to dismantle the administered price mechanism in the petroleum sector.

The National Democratic Alliance freed both petrol and diesel prices in April 2002, before putting the decision on hold ahead of the 2004 general elections.

According to industry analysts, had the UPA-I pushed ahead with deregulation, the fiscal situation would have been better.

The decontrol of diesel prices in January 2013 was half hearted.

Dual pricing of diesel was introduced by M Veerappa Moily last year. Bulk consumers like the military, the railways and state transport undertakings were forced to buy the fuel at market rates.

Of the total diesel consumption of 70 million tonnes per annum, bulk diesel sales are close to 12 million tonnes and the government wanted to save at least Rs 13,000 crore (Rs 130 billion) through the measure. 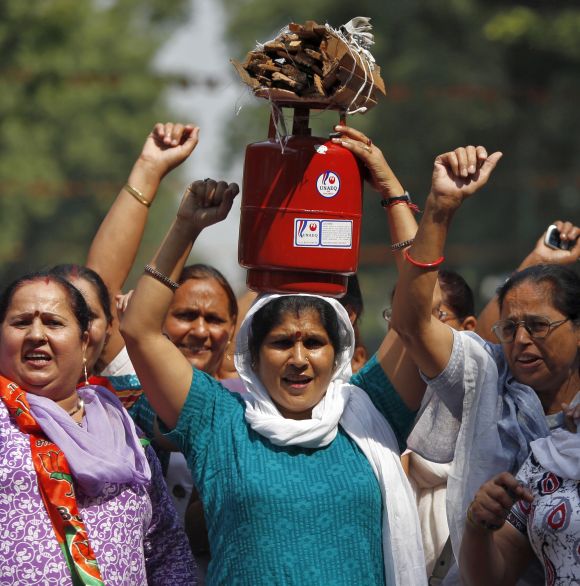 Image: One of the bold steps was raising the price of gas from $1.8 per mmBtu to $4.2 per mmBtu.
Photographs: Mansi Thapliyal/Reuters

However, the government has taken a U-turn by supplying subsidised diesel to state transport undertakings.

This would have doubled to $8.4 a unit, had the Election Commission not intervened.

The UPA can be credited with setting up a tariff commission way back in June 2005.

It led the way by deciding to fix the price in 2007 for Reliance Industries' output from the KG-D6 offshore gas block.

Critics say the government has invited unnecessary attention by forwarding the decision on the latest gas price hike to the Election Commission.

The current gas price became applicable on April 1, 2009, when the model code of conduct was in place for a fortnight for the last Lok Sabha elections. 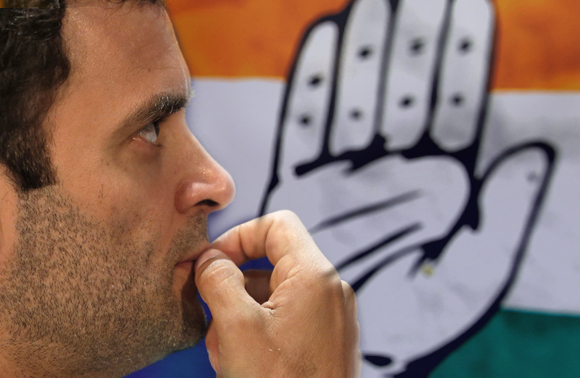 The critics feel there was no need for the government to approach the Election Commission this time.

Not just pricing, even the investment scenario for the hydrocarbon sector looks bleak at the moment.

After nine rounds of auctions, 302 oil and gas blocks allocated and 164 discoveries, the New Exploration Licensing Policy is a flop because of the drop in international interest in the Indian hydrocarbon sector. A much-awaited ethanol blending programme is still waiting in the wings.

And the interest of Reliance and Essar in retailing fuel has declined after the UPA went back to administered pricing in the first six years of its rule.