News
Business
Movies
Sports
Cricket
Get Ahead
Money Tips
Shopping
Sign in  |  Create a Rediffmail account
Rediff.com  » Business » With core business shaky, IT services cos to take a revenue hit

With core business shaky, IT services cos to take a revenue hit

Indian IT services firms will increasingly find it difficult in posting double-digit growth as revenues from their core application development and maintenance business continue to decline.

This is, despite the fact that digital revenues now constitute 40 per cent of their top line, at least 10 percentage point increase over the past one year.

“While the pressure on traditional services is extremely high, we are not in position to judge the speed of decline as of now. However, there is a clear message that the overlap between traditional and digital services is growing, leading to some level of cannibalisation,” said Sanchit Vir Gogia, chief analyst and chief executive officer (CEO), Greyhound Research.

Analysis of the third quarter earnings for this financial year pointed out that revenues of these companies from traditional businesses either declined or grew at a slower pace.

While the numbers for Wipro were not available, sources said it was on a negative zone. The market leader, Tata Consultancy Services (TCS) has discontinued the practice of providing separate figures for digital versus core revenues from third quarter onwards.

“Digital is not growing that fast, while core is declining every year. That is the reason that for most firms, growing at double digit has become a challenge,” said Pareekh Jain, an IT outsourcing advisor and founder of Pareekh Consulting. “IT firms are witnessing cannibalisation of their revenues to an extent, which is visible from the fact that clients are asking for discount during the time of project renewal.”

Experts opined that the line between core and digital are getting blurred and in the absence of any reporting framework, TCS’s decision not to differentiate between the two is logical.

“If you see, TCS is taking the approach of Accenture, which has also stopped reporting digital revenue as in every project, there is a component of digital now,” Jain said.

Interacting with analysts, the CEO and MD of TCS, Rajesh Gopinathan, had echoed this sentiment.

“It is becoming difficult to differentiate between what is digital and what is existing, and that boundary has become a very nebulous boundary. That is why, we are discontinuing reporting from this quarter onwards,” Gopinathan had said.

Despite the fall in core revenues, IT firms are recovering faster owing to new revenue streams. “The growth of newer revenue lines has started in a significant way. So, it’s not May Day yet,” said Gogia of Greyhound Research.

Debasis Mohapatra in Bengaluru
SHARE THIS STORY
Print this article 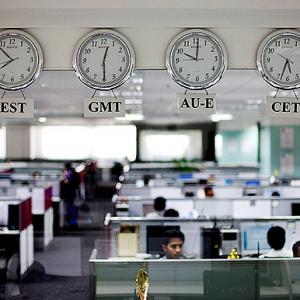 IT services cos eye larger share of engineering deals