Five to six issues may hit the market if Chalet Hotels's IPO is successful and if there are no negative surprises in the Union Budget on February 1.
Sundar Sethuraman reports. Since October, not a single company has come out with an IPO.

The share sale of the K Raheja Corp-promoted firm opens this week.

The IPO comprises of a fresh issue of Rs 950 crore and offer for sale of 24.6 million shares.

At the upper end of the price band, the issue size works out to Rs 1,641 crore, making it the biggest IPO in six months.

"This, in many ways, is the opening of capital markets after a long period of time. We believe this is the best company to go out and open the innings for the revival of the capital markets," says Atul Mehra, managing director of JM Financial.

Market participants said five to six issues will hit the market if Chalet Hotels's IPO is successful and if there are no negative surprises in the Union Budget on February 1.

Apart from volatility in the market, they added the correction in mid and small-cap stocks also worried the companies that were planning their market debut.

Bankers said there was a valuation mismatch as many of these companies had filed for IPOs when valuations were higher, and the subsequent change of events made it difficult for them to get the valuations they had in mind. 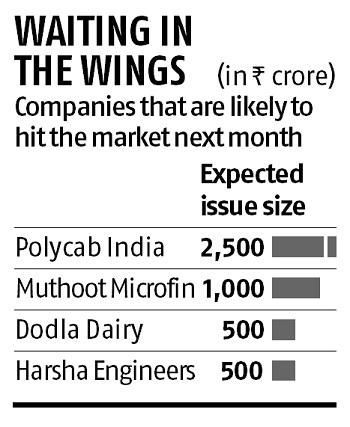 Polycab India, Muthoot Microfin, Dodla Dairy, Harsha Engineers, and IndiaMART are some of the companies waiting to tap the markets.

Since October 2018, companies and bankers have desisted from going public on account of volatile market conditions.

Market sources said even Chalet Hotels had to tone down its valuations to align with the change in market conditions.

The brake in the IPO market was applied after a good run of 20 months.

The Indian equity markets witnessed volatility during the three months owing to the liquidity crisis in the NBFC space, a depreciating rupee and high crude oil prices, as well as concerns over state election results.

Currently, around 60 companies are awaiting markets regulator Securities and Exchange Board of India's approval to launch their IPOs.

Another 17 have filed their draft documents with the regulator already.

Chalet Hotels's IPO will remain open for subscription from January 29-31.