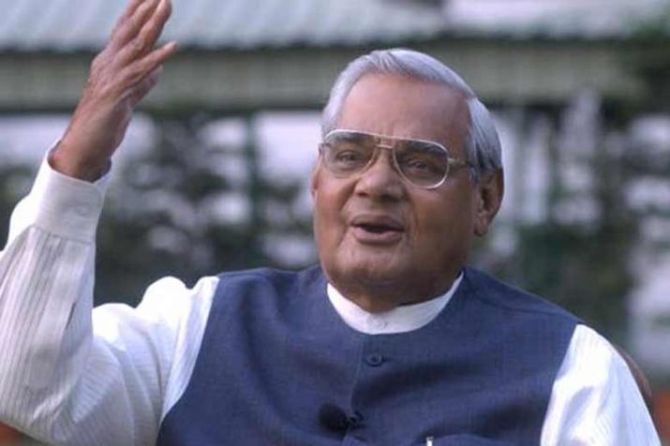 Regarded by some as the father of second generation economic reforms, Vajpayee, who died on Thursday at the age of 93 years, was decisive and pursued his reforms agenda with vigour without getting ruffled by criticism.

His idea was simple - construct arterial roads that could spur development just like what was witnessed in the US.

Subsequent governments have only expanded on that theme.

But arguably the biggest reform of his tenure was the privatisation drive which saw 32 state-owned companies and hotels being sold to private firms in five years.

For the first time ever, a Department of Divestment to process privatisation candidates was created and a Cabinet Committee on Divestment formed to accord expeditious approvals.

But the privatisation drive wasn't easy. He faced opposition and the decision to privatise Balco was challenged right up to the Supreme Court, which upheld the move.

However, he failed in privatising oil refiner Hindustan Petroleum Corp Ltd (HPCL) with his own cabinet colleagues opposing the move.

He was ahead of times when his government made a diplomatic push to acquire a 20 per cent stake in the gigantic Sakhalin-I oil and gas fields in far-east Russia for $1.7 billion in 2001.

This was followed up with a 25 per cent stake in an oilfield in Sudan for $720 million.

The decisions were criticised for making such huge investments in risky countries but Vajpayee was proven right when even the Sudan project recouped investments within years.

His model of energy security by investing in overseas projects has since then been followed vigorously with footprint now expanded to 20 countries and energy diplomacy part of India's engagements with other countries.

China too has vigorously followed the same model and has invested in more projects than India in the last one-and-a-half decade.

Vajpayee will also be remembered for introducing doping of sugarcane-extracted ethanol in petrol to not just cut import dependence but also provide farmers with an alternative source of income.

The concept, however, suffered a slowdown during the 10-year UPA rule.

It has again been revived by the Modi government.

Bharti Enterprise chairman and founder of Bharti Airtel Sunil Bharti Mittal said he was a great economic reformer and can truly be called father of modern telecommunication in the country, having ushered in the National Telecom Policy in 1999, which "helped the industry overcome some of its toughest early challenges".

Member of Parliament Rajeev Chandrasekhar, who earlier owned BPL mobile service company, said that Vajpayee was responsible for opening up the telecom sector and giving policy impetus to expand telecommunication sector in the country.

Chandrasekhar said the telecom policy of 1999 released by the NDA government under Vajpayee paved the way for structural reforms in the sector, leading to unprecedented growth of mobile subscribers, introduction of fierce competition into the mobile telephony sector, and deep-rooted reforms in the regulatory regime, which was followed up by the amendment of the TRAI Act in 1999.

"A great economic reformer, as a prime minister he was always guided by a strong conviction that liberalisation would help us realise our economic potential and ultimately open the doors to becoming a globally competitive, strong and resilient economy," Mittal said.