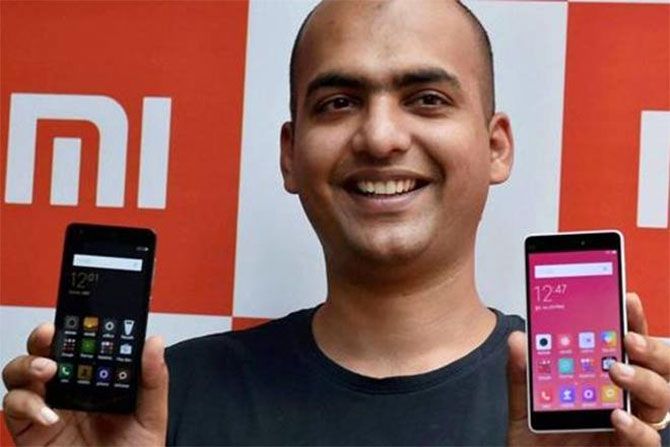 It has taken a little over 10 per cent of the market after entering India in mid-2014. And, is evaluating on entering new categories this year, said its new vice-president, Manu Jain.

After capturing the second spot by the end of 2016, Xiaomi has raised the pitch in the affordable price segment with two launches this year.

This segment is dominated by Samsung's J-series of smartphones. Launched in January, Xiaomi's Redmi Note 4 was a hit, with 250,000 handsets sold within 10 minutes.

Its latest device, Redmi 4A, is priced Rs 5,999 and Jain contends it has better features and hardware than Samsung's hot-selling J2.

Its handsets are priced to attract young buyers, as 85 per cent of its customers are between 18 and 34 years. About 75 per cent of smartphones sold i India are in the below-Rs 10,000 segment. Xiaomi's growth here is key, as India is currently the largest market for it outside the China region.

"We are offering a better phone in every aspect at a much lower price, compared to high selling popular phones like the J2 (priced at Rs 9,000), and that's what we want to communicate.

We have been growing by 150 per cent year-on-year; the biggest issue holding us back here is our short supply. We are addressing that, too. We will keep adding capacity," said Jain.

While Jain refused to disclose its capacity, "it's much higher than the first unit", he said. Xiaomi could not meet the market demand despite the first plant operating at 100 per cent. It manufactures over 90 per cent of its handsets locally.

While it holds the top spot in sales through the online channel, with 30 per cent share, it has renewed focus on expanding the offline distribution. Currently, almost two-third of all smartphones are sold through the latter route.

"We are aggressively increasing our retail reach. While, in January 2016 our handsets were sold through 1,500 outlets, at the end of this week the number would touch 10,000," said Jain.

To strengthen its presence in the southern part, Xiaomi has joined hands with four retail chains -- Sangeetha, Poorvika, Big C and Lot Mobiles.

It is also adding 1,500 outlets in Delhi, Chandigarh and Jaipur. The firm had tied up with four distributors last year, including Redington, InnoCom and Just Buy Live.

Xiaomi is currently evaluating whether to venture into two new categories. Smart scooters and smart water purifiers are under consideration. Last year, it added air purifiers and smart bands. Jain says apart from revamping the smartphone portfolio on a regular basis, it will keep adding categories.