With the mercury levels rising and the holiday break for schools beginning, summer stocks -- be it cooling solutions or those related to holidays -- tend to stand out.

It is no surprise that some stocks in the air-conditioning space have outperformed the overall market in the last couple of months.

The gains could continue given that India Meteorological Department has predicted above-normal temperatures in key regions and an extended summer season.

After a forgettable CY18 due to unseasonal rains, regulations and higher raw material costs, brokerages expect a better CY19 for cooling majors on account of lower costs and a spike in demand.

In addition to cooling solutions, companies in the beverages space, too, stand to gain from an expected surge in demand as summer takes hold.

The second set of companies that will benefit are those that cater to customer needs during the holiday season.

Given the school break, this is the peak travel season and companies catering to the 'friends and family' segment are expected to gain, especially in the hospitality and transportation segments.

There are two stocks that have the largest reach, be it in the number of hotel rooms or domestic market share with a pan-India network, which should take a major share of the gains.

Leisure and entertainment activities is the other theme to find favour among investors during holidays.

Companies in the quick service restaurant space, multiplex chains and personal luggage makers could see a surge in footfalls.

The consumption theme for this set of stocks is expected to be driven by higher disposable income, the need for replacement, and lower penetration levels.

Given the favourable demand-supply situation, India's largest hotel chain should benefit by expanding from just under 18,000 rooms currently to about 25,000 over the next four years.

The company is looking at increasing its revenue per room through higher room rates as well as improved occupancies, especially in the premium segment.

In addition to top line growth, cost optimisation measures across verticals, including sourcing and manpower, should also help drive margins.

The company is seeking to improve its balance sheet through monetisation of its land bank and sale and leaseback measures, besides asset-light ways such as management contracts for expansion.

Given the revenue growth and margin gains, profits are expected to double over the next two years. Jubilant has launched 10 new pizzas under its World Pizza League to cash in on the coming ICC Cricket World Cup.

Same-store sales (SSS) growth has been healthy in past five quarters and the trend is likely to continue.

Extension of every day value offer to regular sized pizzas from medium sized earlier, and efforts to cut down delivery time to 20 minutes, will add to SSS growth.

Tie-up with Pepsi as a beverage partner in November 2018 to push up margins.

Also, its recent foray into Chinese food -- Hong's Kitchen -- is a long-term positive. 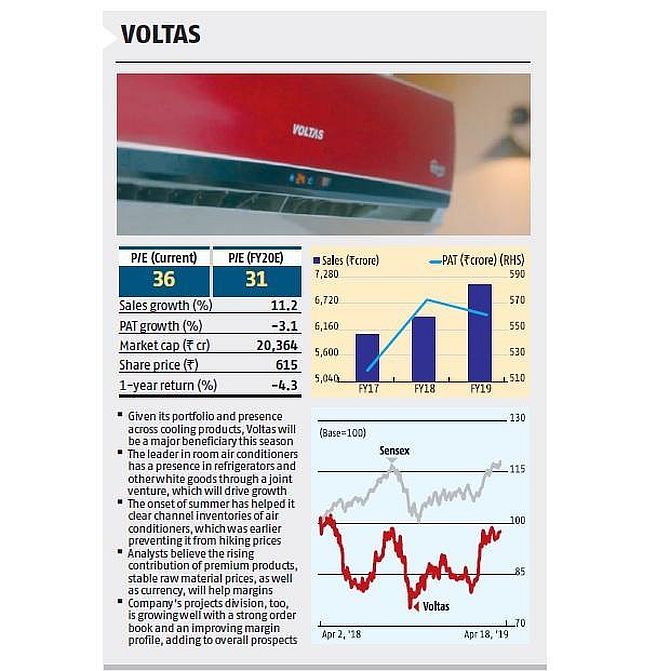 Given its portfolio and presence across cooling products, Voltas will be a major beneficiary this season.

The leader in room air conditioners has a presence in refrigerators and other white goods through a joint venture, which will drive growth.

The onset of summer has helped it clear channel inventories of air conditioners, which was earlier preventing it from hiking prices.

The company's projects division, too, is growing well with a strong order book and an improving margin profile, adding to overall prospects. 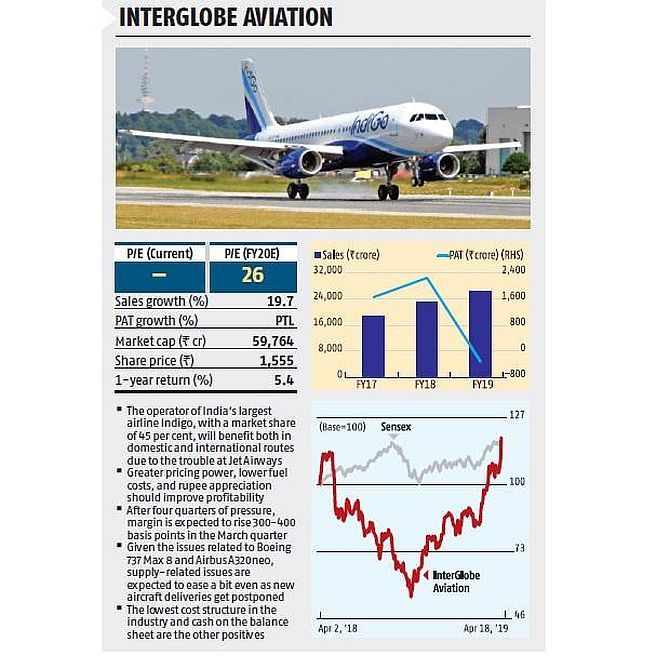 The operator of India's largest airline Indigo, with a market share of 45%, will benefit both in domestic and international routes due to the trouble at Jet Airways.

After four quarters of pressure, margin is expected to rise 300 to 400 basis points in the March quarter.

Given the issues related to Boeing 737 Max 8 and Airbus A320neo, supply-related issues are expected to ease a bit even as new aircraft deliveries get postponed.

The lowest cost structure in the industry and cash on the balance sheet are the other positives. 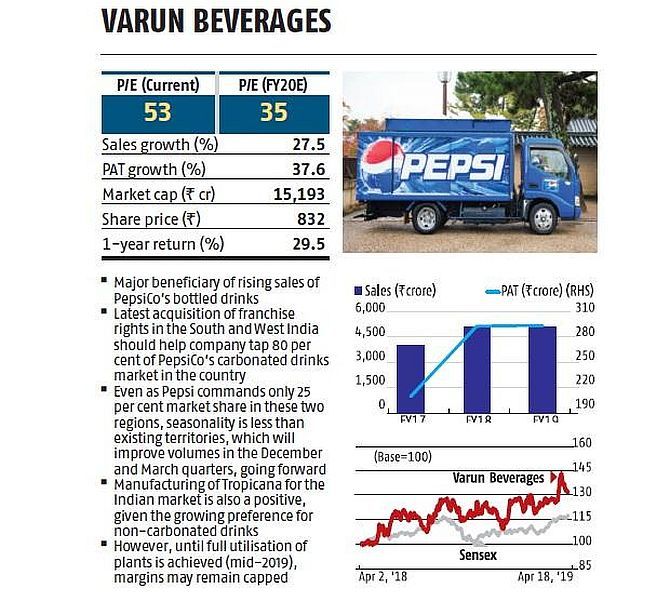 Latest acquisition of franchise rights in south and west India should help company tap 80% of PepsiCo's carbonated drinks market in the country.

Even as Pepsi commands only 25% market share in these two regions, seasonality is less than existing territories, which will improve volumes in the December and March quarters, going forward.

Manufacturing of Tropicana for the Indian market is also a positive, given the growing preference for non-carbonated drinks.

However, until full utilisation of plants is achieved (mid-2019), margins may remain capped. 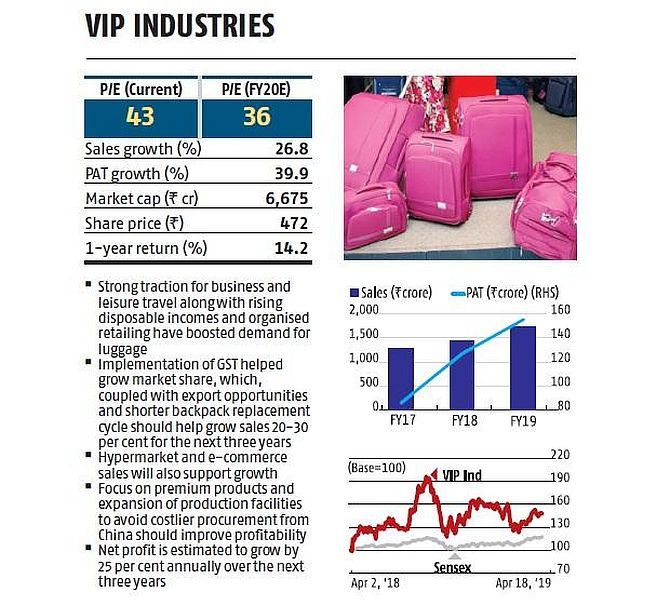 Strong traction for business and leisure travel along with rising disposable incomes and organised retailing have boosted demand for luggage.

Implementation of GST helped grow market share, which, coupled with export opportunities and shorter backpack replacement cycle should help grow sales 20% to 30% for the next three years.

Focus on premium products and expansion of production facilities to avoid costlier procurement from China should improve profitability.

Net profit is estimated to grow by 25% annually over the next three years. 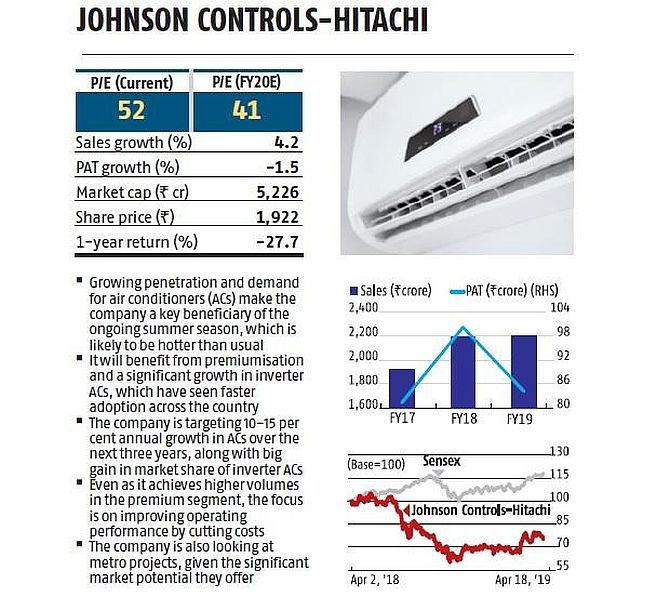 Growing penetration and demand for air conditioners make the company a key beneficiary of the ongoing summer season, which is likely to be hotter than usual.

It will benefit from premiumisation and a significant growth in inverter ACs, which have seen faster adoption across the country.

The company is targeting 10% to 15% annual growth in ACs over the next three years, along with big gain in market share of inverter ACs.

Even as it achieves higher volumes in the premium segment, the focus is on improving operating performance by cutting costs.

The company is also looking at metro projects, given the significant market potential they offer. 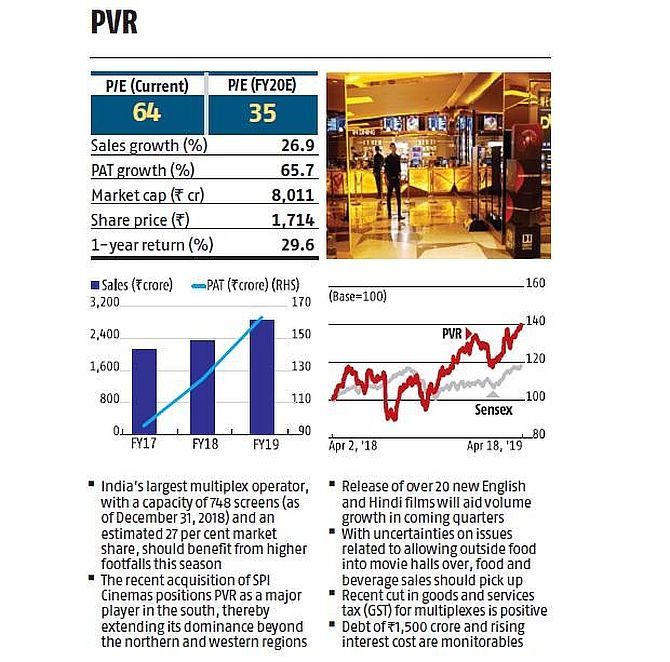 India's largest multiplex operator, with a capacity of 748 screens (as of December 31, 2018) and an estimated 27% market share, should benefit from higher footfalls this season.

The recent acquisition of SPI Cinemas positions PVR as a major player in the south, thereby extending its dominance beyond the northern and western regions

Release of over 20 new English and Hindi films will aid volume growth in coming quarters.

With uncertainties on issues related to allowing outside food into movie halls over, food and beverage sales should pick up.

Recent cut in GST for multiplexes is positive.

Debt of Rs 1,500 crore and rising interest cost are monitorables. 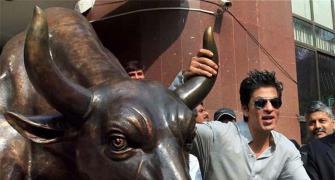