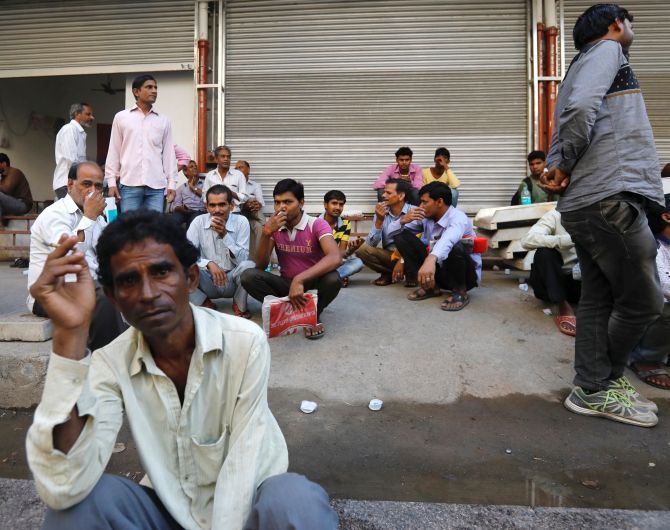 The unemployment rate in India rose to a three-year high of 8.5 per cent in October, with rural joblessness pushing it up.

While urban joblessness rate was 8.9 per cent, in villages it stood at 8.3 per cent, data from the Centre for Monitoring Indian Economy (CMIE) showed.

Mahesh Vyas, managing director and chief executive officer at the prominent and independent database agency, said that unemployment rates before demonetisation are not comparable with those today -- rather, the 8.5 per cent of today is graver than a same rate before note ban -- as the labour force itself shrunk after the November 2016 move.

“The high joblessness in the first half of 2016 was a different story altogether. Many rural women and youth across the regions left the labour force itself after demonetisation, reducing the denominator that is used to calculate the unemployment rate,” he told Business Standard.

Exactly a month ago -- in September -- unemployment rate had dropped to 7.2 per cent overall, and further improved to 6 per cent in villages. It has drastically deteriorated in October.

“After deeper analysis of this abrupt fall and jump, our investigation showed that a combination of agricultural activities such as late sowing and early harvest contributed to more labour requirement in the rural,” said Vyas.

“Due to the risk of machines getting damaged, farmers in many areas such as Bihar employed manual labour in place of harvesters, helping create temporary jobs.”

Urban unemployment has consistently remained about 1 to 2 percentage points higher than that in the rural, according to the CMIE data. But the gap has narrowed to 0.6 percentage points in October, suggesting a graver deterioration in village jobs.

“A rate of 8 per cent in rural India is stressful, because there are not many fall-back options there, as in towns and cities. It would become a question of survival if the situation worsens further,” Vyas warned.