With railways plagued by repeated derailments, government on Wednesday proposed setting up of a special safety fund of Rs 1 lakh crore that will cover upgrade of tracks and signalling besides elimination of unmanned level crossings. 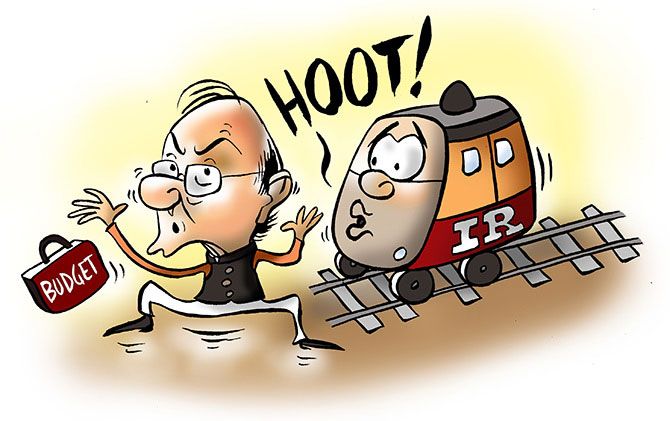 The plan size for the Railway Budget, merged with General Budget 2017-18, has been pegged at Rs 1,31,000 crore as against Rs 1.21 lakh crore last year, Finance Minister Arun Jaitley announced.

"For passenger safety, a Rashtriya Rail Sanraksha Kosh will be created with a corpus of Rs 1 lakh crores over a period of 5 years. Besides seed capital from the government, the Railways will arrange the balance resources from their own revenues and other sources. The government will lay down clear cut guidelines and timeline for implementing various safety works to be funded from this 'Kosh'. Unmanned level crossings on Broad Gauge lines will be eliminated by 2020. Expert international assistance will be harnessed to improve safety preparedness and maintenance practices," he said.

"In the next 3 years, the throughput is proposed to be enhanced by 10%. This will be done through modernisation and upgradation of identified corridors. Railway lines of 3,500 km will be commissioned in 2017-18, as against 2,800 km in 2016-17. Steps will be taken to launch dedicated trains for tourism and pilgrimage," he said.

"Our focus is on swachh rail. SMS based Clean My Coach Service has been started. It is now proposed to introduce ‘Coach Mitra’ facility, a single window interface, to register all coach related complaints and requirements. By 2019, all coaches of Indian Railways will be fitted with bio toilets. Pilot plants for environment friendly disposal of solid waste and conversion of biodegradable waste to energy are being set up at New Delhi and Jaipur railway stations. Five more such solid waste management plants are now being taken up," he added.

Other points Jaitley made:

* Service charge on e-tickets booked through IRCTC has been withdrawn.

* Elimination of all unmanned level crossings on the broad gauge network by 2020.

* The shares of Railway PSEs like IRCTC, IRFC and IRCON will be listed in stock exchanges.

* A new metro rail policy will be announced with focus on innovative models of implementation and finance.