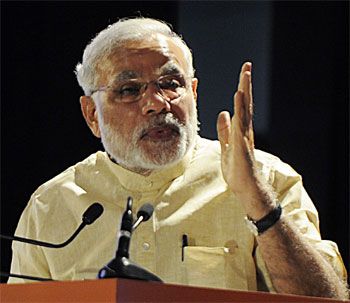 The trial run for the scheme started on May 1 through nationalised banks. The scheme was simultaneously launched on Saturday across 115 locations in India.

Also, under the scheme, 150 million new bank accounts were opened with a total deposit of nearly Rs 15,800 crore (Rs 158 billion), he added. At present, nearly 80-90 per cent of the country's population did not have any insurance or pension schemes, he further said.

The success of Jan Dhan Yojna also led to a successful roll out of the direct bank linked subsidy scheme for domestic LPG cyliners, said Modi.

"Nearly 120 million bank accounts are now getting direct subsidy for gas cylinders. We can already see a difference. Leakage worth crores have been checked," he said.

Underlining the role of tiny and small enterprises in steering the economy of the country, Modi said, nearly 55 million tiny enterprises employ nearly 140 million people, while big industries accounted for the jobs of only a miniscule population.

"The role of big industries is very limited. The country is run by small enterprises," said Modi.

Mudra Bank, which is expected to meet small credit needs of the people, too featured in the list of achievements cited by Modi.

"The average credit need of a tiny enterprise is Rs 17,000. No bank provides such small loans. For this, we created the Mudra Bank. The work to start the bank is on," he said.