News
Business
Movies
Sports
Cricket
Get Ahead
Money Tips
Shopping
Sign in  |  Create a Rediffmail account
Rediff.com  » Business » Why you should deduct tax at source while buying property

Why you should deduct tax at source while buying property

Else, you’ll need to pay from own pocket with interest and penalty, notes Tinesh Bhasin 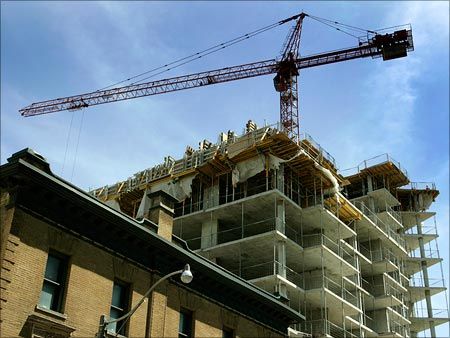 On receiving a notice from the Income Tax Department, a client of Rajiv Jain, a chartered accountant, called him up and read out its contents.

The letter asked the client, a chemical trader, to explain why the withholding tax on a property purchased in January 2014 had not been paid.

Unaware of the tax former finance minister P Chidambaram had introduced in the Budget of 2013, the client had bought a flat in Mumbai suburb of Andheri without making provisions for the mandatory tax.

The buyer of an immovable property worth Rs 50 lakh (Rs 5 million) or more needs to deduct a withholding tax of one per cent of the agreement value and deposit it with the government, says the Finance Bill of 2013.

Jain says he expects to see more notices from the Income Tax department on this tax deducted at source provision this year. In most cases, the buyer is unaware of his or her responsibility.

The seller has no responsibility in this regard and is not held accountable.

Suresh Surana, founder, RSM Astute Consulting Group, explains that if the buyer does not comply with the provisions, then he is treated as an ‘assessee-in-default’ under Section 201 of the Income Tax Act.

The person has to pay interest on failure of payment and also in case of delay.

The government introduced this provision because TDS has been one of the most successful mechanisms to track financial transactions, explains Divya Baweja, partner, Deloitte Haskins & Sells.

Once the transaction is recorded, the seller is forced to declare it while filing returns and pay capital gains, if any.

“Also, the government gets some part of the tax money immediately rather than at end of the year.”

Got money, what next?

This taxation applies to all types of transfer of property except agricultural land.

This means, you have to deduct tax even from the developer when purchasing a first-hand house.

Once the property value is decided, the purchaser pays 99 per cent of that amount to the owner and keeps one per cent for payment to the government.

“In the final agreement, signed in front of the Registrar, the buyer should carry appropriate clause that states any amount of tax deducted would also be treated as discharge of sale consideration.

As soon as the purchaser gets the money, he needs to log onto to www.tin-nsdl.com. Under the service menu, he needs to click on the option ‘e-payment: Pay Taxes Online’. When the new page opens up, select the Form 26QB, which will be a challan-cum-statement.

After filling up the form, if the money is readily available in the bank account, the buyer can select the option of ‘e-tax payment immediately’ and pay via netbanking.

Else, ‘e-tax payment on subsequent date’ could be selected.

If the person selects the latter, he will get an acknowledgement number.

Make a note of it as you will need to quote it while paying taxes.

Also, take a print of the form to submit it later at a recognised public sector bank’s branch.

The money needs to be deposited within seven days from the end of the month in which tax is deducted.

In case of a delay, the Income Tax Department will levy a fee of Rs 200 a day.

If the property transaction has more than one party as a buyer or seller, Form 26QB needs to be filled in by each buyer for unique buyer-seller combination for the respective share. For example, in case of one buyer and two sellers, two forms need to be filled.

For two buyers and two sellers, four forms need to be filled for respective property shares.

“With the introduction of Form 26QB, the government has simplified the entire procedure.

“It cuts down on the requirement of having a Tax Deduction and Collection Account Number, or TAN, which is mandatory when a person or a company that deducts TDS,” says Saiya.

For those receiving notices

If you receive an Income Tax notice for a past transaction, there could be hope of reducing the outgo if the seller has paid tax on the gains he made after selling the property, say experts.

If the buyer can prove to the authorities that the seller has paid tax by producing the relevant document, the purchaser can get away by paying the interest and the fee.

For example, in case of Jain’s client, the chemical trader would have been able to save the Rs 1.3 lakh and managed with a few thousands if he had got the seller to disclose his returns.

However, he was unable to trace him.

In case the owner of the property before you had not paid tax but used the money to invest in capital gains saving bonds or in another property, the relevant document pertaining to this can save you.

For property under construction

When a person is buying an under-construction property, at what stage should he or she deduct the withholding tax from the developer?

In many recent cases, the buyer only makes a small upfront payment and registers the flat in his name.

Experts explain that in such cases, the TDS should be deducted when the property is handed over and the final payment is made.

For under-construction property, the buyer is considered to hold an interest in the property and for taxation purpose is not considered the owner until completion.

Purchasing from an NRI?

There is a separate rule if the seller is a non-resident Indian.

In this case, the buyer doesn’t need to deduct the withholding tax.

The onus falls on the seller.

According to Section 195 of the Income Tax Act, the gains that the NRI makes is taxed according to the applicable slab rate.