By Tinesh Bhasin
Last updated on: April 06, 2016 13:43 IST
The implementation of MCLR from April 1 has already led to a rate cut of 10 basis points on home loans by the country’s largest bank, State Bank of India, and others. 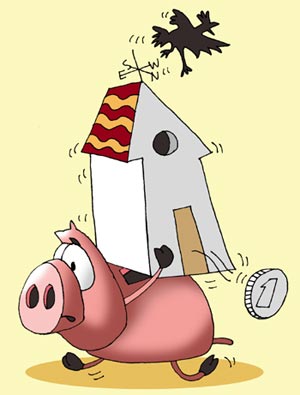 The Reserve Bank of India (RBI) has cut repo rates by 150 basis points (bps) in the past 14 months, including a 25-bp cut on Tuesday.

However, borrowers are yet to get substantial benefit from banks. The transmission, at best, has been 50-60 bps. But, things could change now for several reasons.

“Introduction of the marginal cost of funds-based lending rate (MCLR) and the recent cut in small savings rate, along with a likely improvement in liquidity (as well as more open market operations), should improve monetary transmission. The MCLR has already led to an effective decline in fresh lending rates by 25 bps, even before Tuesday’s rate cut. Thus, recent measures are likely to lead to an effective decline of 50 bps in lending rates,” says a Religare report.

There will be more liquidity for banks, thanks to reduction of cash reserve ratio (CRR) from 95 per cent to 90 per cent with effect from April 16. On Tuesday, while announcing the cut in repo rates 25 bps, RBI Governor Raghuram Rajan said: “Banks have said there is not enough liquidity. Now, we have given them more liquidity; banks can transmit more.”

He also said borrowing (for banks) is now significantly cheaper and will continue to be so.

CRR is the proportion of deposits banks need to keep with RBI.

The implementation of MCLR from April 1 has already led to a rate cut of 10 basis points on home loans by the country’s largest bank, State Bank of India, and others.

While bankers did not say anything specific about the transmission on Tuesday, analysts believe rate cuts are on the anvil.

“Borrowers can expect a 10-15 basis point cut in bank’s lending rates within two weeks. Between a month and two, there could be reduction of 25 basis points,” says Sahil Kapoor, chief market strategist at Edelweiss Securities.

Also, the government has prepared the ground for banks to cut deposit rates by inducing a deep cut in small savings rates by 60-130 bps.

Now, the interest rates on these instruments are revised every quarter, based on government securities rates.

Earlier, banks had complained they were unable to cut their cost of funds because they were competing for deposits with small savings instruments.

“These reforms will now let banks lower their deposit rates, and, in turn, lower lending rates. There will be more announcements later as the cost of funds gets lower for banks and the liquidity situation improves,” says Siddharth Purohit, senior research analyst at Angel Broking.