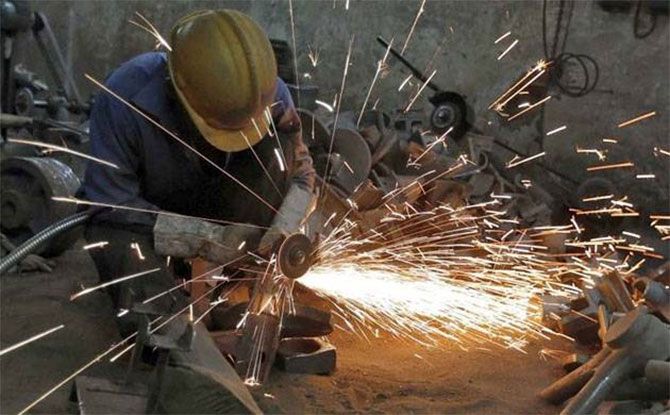 Indian manufacturing sector expanded marginally in February as a rebound in export demand contributed to a stronger expansion of total new orders, a monthly survey showed on Wednesday.

The Nikkei Markit India Manufacturing Purchasing Managers' Index (PMI) -- an indicator of manufacturing activity -- increased to 50.7 in February, up from 50.4 in January, as output and order books rose at accelerated rates.

"Indian manufacturers benefited from recovering demand and raised production volumes in response to another expansion in inflows of new work," Pollyanna De Lima, Economist at HIS Markit and author of the report, said.

On the prices front, the survey said input and output price inflation quickened in February.

"Of concern, higher commodity prices resulted in increased cost burden facing manufacturers. The sharp rate of inflation seen in February was the most pronounced in two-and-a-half years and led factory charges to be raised at the quickest pace in 40 months," Lima said.

The rate of inflation was solid and the strongest since October 2013.

February is the second straight month in which the manufacturing sector improved after the demonetisation-induced contraction at the end of 2016.

A reading above 50 indicates expansion while any score below the mark means contraction.

However, the latest reading was much weaker than the long-run series average (54.2), largely reflecting sub-par growth for output and new business.

"However, with growth rates well below-par, the sector still has many areas to develop before it can fire on all cylinders," Lima said.

Despite the uptrend in the sector, manufacturing employment declined, though the rate of job losses was marginal.

"Businesses don't yet seem convinced as to the sustainability of the rebound as highlighted by cuts to payroll numbers and destocking initiatives," Lima added.

As per the survey, confidence among Indian manufacturers was relatively subdued in February.

The surge in inflation is likely to cause demand from price-sensitive consumers to fall and potentially jeopardise the economic recovery, Lima added.

The Reserve Bank in its policy review meet on February 8 kept key interest rate unchanged at 6.25 per cent and said it is awaiting more clarity on the inflation trend and impact of demonetisation on growth.