Motor insurance is expected to generate largest claims for the companies whereas for crop insurance, the Agriculture Insurance Company (AIC) is expecting claims of about Rs 15-16 crore Several public sector insurers have expedited their claim process in Kerala after the insurance regulator, Insurance Regulatory and Development Authority of India (Irdai), asked for faster settlement of claims in the state that has been ravaged by floods.

Motor insurance is expected to generate largest claims for the companies whereas for crop insurance, the Agriculture Insurance Company (AIC) is expecting claims of about Rs 15-16 crore.

Girija Kumar, Oriental Insurance CMD, said: “We have simplified the claim processes in Kerala. We have established various collection centres and are deploying more people in the state for faster claim settlement.

"We are expecting a huge claim outgo in motor, household and shopekeepers insurance.

"At the moment, it would be difficult to assess the extent of damage.”

Not even one-fourth of the estimated claims have been raised so far. United India Insurance has received claims of about Rs 2 crore.

“But the amount is likely to go up in the next three to four days,” according to a company spokesperson.

“The second round of floods has been particularly devastating and we are expecting a large claim.

"Unlike Chennai floods, in Kerala, all the districts are impacted. The economic loss is going to be huge.

"We are yet to assess the insured losses. We are trying to settle claims fast.

"Through advertisements in various media we are asking people to contact us for the same,” said the spokesperson.

Insurance claims in Chennai during floods in 2015 were estimated to be close to Rs 4,500 crore, a majority of which were motor.

The Irdai has directed insurance companies to have "a suitably simplified process/procedure including relaxations in the usual requirements wherever feasible" and report on claim settlement on a weekly basis.

Meanwhile, the AIC, which had a sum insured of about Rs 600 million, would pay only 25 per cent.

If damage is during the sowing period, insurance companies are liable to pay only 25 per cent of the sum insured under the Pradhan Mantri Fasal Bima Yojana (PMFBY).

The floods had a devastating effect on paddy plantation.

Earlier, Financial Services Secretary Rajiv Kumar said on Twitter that claims under the PMFBY will be “settled on immediate basis through on account basis”.

The AIC is the only empanelled crop insurer under the PMFBY in Kerala. 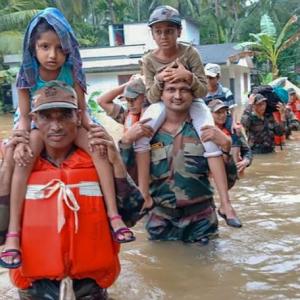