If your fund's expense ratio has risen dramatically after Sebi's recent changes, compare it with the category average before switching, advises Sanjay Kumar Singh.

Over the past fortnight, you may have received an e-mail from your fund house announcing a change in the total expense ratio (TER) of your fund. Fund houses are making these changes in response to Securities and Exchange Board of India circulars that came in September and October.

Cost-related regulations tightened: Sebi has changed the slabs for the TERs that fund houses can charge.

Also, all sales and distribution costs must be charged to the scheme. Earlier, fund houses would charge a part of this cost to the scheme and pay the rest out of their profits.

This directive has led to a change in TERs, as this illustrative example will show.

Earlier, the fund house may have paid another 0.5 per cent to distributors out of the AMC's profits.

Now, if this 0.5 per cent is also charged to the scheme, the total sales and distribution cost becomes 1.5 per cent. The TER of the direct plan will henceforth be 0.5 per cent (2 less 1.5).

Within TER, the cost under any one head, cannot be higher in a direct plan than in a regular plan.

Fund houses, for instance, cannot charge a higher fund management fee in a direct plan over what they charge in a regular plan, as happened earlier.

Says Swarup Mohanty, chief executive officer, Mirae Asset Global Investments (India): "Investors will now know exactly how much sales and distribution cost they are paying. This will be equal to the TER of a regular plan less the TER of a direct plan."

Avoid knee jerk reactions: TERs of both direct and regular plans of equity and debt funds have changed.

Fund houses like Edelweiss and Mirae have halved TERs in many direct plans. Others have made marginal changes. Investors stand to gain wherever TERs have come down. But TERs have also risen in some cases.

"If the rise in TER is small, say, 10 to 20 basis points, do not change your fund if its performance remains on track," says Banerjee.

In the case of direct plans of debt funds of fund houses like Sundaram, however, TERs have almost doubled.

In debt funds, returns tend to be in the single digit, so investors need to be highly cost conscious there.

Wait for a couple of months until all changes in TERs have been announced and then review your situation.

"Compare the expense ratio of your fund against the category average and see if it is still competitive, or if it has become expensive," says Vishal Dhawan, chief financial planner, Plan Ahead Wealth Advisors.

If the fund has become expensive, consider exiting it.

"If you plan to exit, keep in mind the exit load and tax implications," says Dhawan.

In some categories, such as credit risk funds, the exit loads can be quite high and can apply for a long period.

If you have to pay an exit load of 1 per cent for a 50-basis point reduction in expense ratio, you may not gain much by shifting (especially in funds where the investment horizon is not long).

Mutual fund officials contend that Indian investors should not worry about the costs of their funds, since active funds tend to outperform here. But data from the latest mid-2018 edition of the S&P Indices Versus Active funds report does not support this claim unequivocally.

"Almost 70 per cent of large-cap funds underperformed the S&P BSE 100 over the five years ending in December 2013. Since then, a majority of large-cap funds and more than 30 per cent of mid-/small-cap funds have consistently underperformed their respective benchmarks, as seen on a five-year rolling basis," says Akash Jain, associate director, global research and design, S&P Dow Jones Indices.

Thus, barring ELSS funds, an investor's probability of outperforming was not more than 50-50. The percentage of funds that under-performed over shorter periods was also above 50 per cent in most cases.

If one looks at 10-year asset-weighted annualised return, while large-cap funds underperformed their benchmarks, ELSS and mid/small cap funds outperformed.

Also, there was significant spread (variation) in performance over 10 years -- 3.6 per cent annualised in large-cap funds and 5.1 per cent in mid/small-cap funds.

Get cost conscious: What the SPIVA report makes clear is that you cannot take outperformance by active funds for granted.

"In active funds, try to limit the expense ratio you pay because that is the only variable you can control," says Avinash Luthria, a Sebi-registered investment adviser and founder, Fiduciaries.

Wide variations in cost within categories:
Save money by selecting lower-cost funds

Given the spread in performance, Jain says fund selection will be critical.

If you lack the ability to select the right fund manager, go direct (expense ratios are lower there) and consult a qualified financial advisor.

Begin with a 25 per cent exposure (of your large-cap allocation) and increase it as you grow more comfortable with these funds. 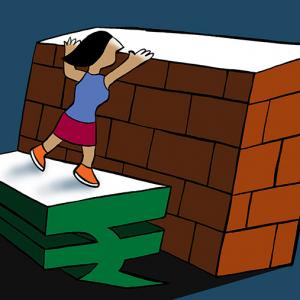 Your early 20s are the best time for financial planning